The United Nations Security Council just voted against a controversial Palestinian Authority proposal, introduced by Jordan, requiring Israel to pull back to the 1967 lines (the 1949 Armistice line), including designating all of East Jerusalem (which includes the ancient Jewish Quarter of the Old City).

The vote failed to get sufficient votes to force a U.S. veto.

The UN Security Council has rejected a Palestinian resolution calling for peace with Israel within a year and an end to Israel’s occupation by 2017.

The resolution failed to muster the minimum nine “yes” votes required in the council for adoption.

It received eight “yes” votes, two “no” votes from the United States and Australia, and five abstentions, from the UK, Lithuania, Nigeria, South Korea and Rwanda.

The US, Israel’s closest ally, had reiterated its opposition to the draft resolution earlier on Tuesday.

Washington said it could not support the draft because it was not constructive and failed to address Israel’s security needs. 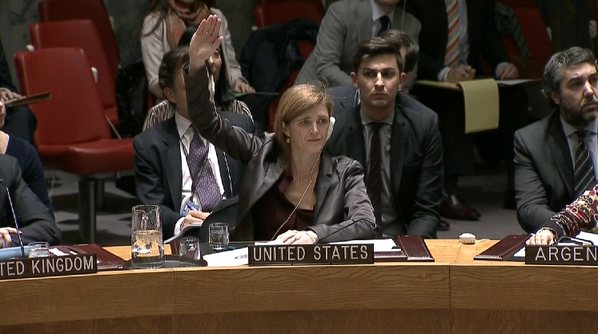 The Times of Israel adds that the result surprised the Palestinians:

According to Israeli media, the deciding votes were those of Nigeria and Rwanda, which had intended to give a ‘yes’ but decided to abstain at the last minute, leaving the Palestinian Authority one vote short of the required nine.

The other three abstentions were those of the UK, Lithuania and South Korea.

The Ynet News site noted that Israeli diplomats were disappointed with France, which supported the resolution despite its objections to its wording and its failed attempt to bring through a much more moderate version.

The Palestinians had claimed Tuesday that they had the nine votes needed to pass the latest version of the statehood resolution they presented to the UN Security Council.

.@AmbassadorPower: Today's vote should not be viewed as a victory for an unsustainable status quo, but a wake up call

Palestinians threatened that if UNSC rejects their resolution they will join UN agencies including ICC. Lets see how they act tomorrow

"Once again, the United States stands out as a voice of clarity, courage and reason," said @AJCGlobal's David Harris, after failed UN vote.

The Hamans lost again. Let us pray they continue losing.

From your fingers to God’s ears…

To this action I can say “Bravo!”

Huzza! One more win for justice.

But regarding the UNSC vote, why does the image of democracy as three wolves and two lambs voting on lunch menu options spring to mind?

And why does that image get stronger with the thought of a UN-recognized Palestinian state?

The British abstained. What a bunch of cowards. The French, well what else could we expect?

“France, China and Russia…Argentina, Chad, Chile, Jordan and Luxembourg…voted for the resolution” Times of Israel.

China can vote on the resolution when they cease their claim on Taiwan, Tibet and withdraw their maritime expansion into Southeast Asia.

Russia can vote on the resolution when they withdraw and return Crimea to the Ukraine.

Yeah, about that. The Administration may want to, may desire to, but it can read the writing on the wall that if they had, there would have been a general rebellion in Congress toward any future Palestinian aid funding.

Without that aid, even Obama knows that Fatah falls flat, Hamas takes over the West Bank and then Israel crushes Hamas as an organization, Obama be damned, and Congress will enthusiastically support the Israeli government in doing so. At that point, Obama might make some feeble bleats in protest, but Israel basically says “hey, we tried it your way, and now we’ve got active terrorists on BOTH sides of us. We’ll deal with this, thank you very much. Keep that aid to us flowing or we’ll oppose the next election of the Congress-Critter that votes against it.”

Believe me: NO ONE wants to be on the wrong side of AIPAC. They’re just too good at electioneering. It’s like crossing the NRA, but with more money and better media connections.

I wonder how much the United States had to threaten Rwanda and Nigeria in order to get them to “abstain” so that the US only could vote ‘no’ rather than have to exercise a Veto.

My guess is that Rwanda and Nigeria had to be threatened with a significant loss in international aid. While the Obama Administration may (does) want Palestinian Statehood with East Jerusalem as its capital, regardless of their protestations, they absolutely cannot have it come in this form. Especially now, because with a Republican Congress, and a strengthened Tea-Party caucus, Congress would have had a fit, and likely enforced some of the “anti-Palestinian” aid clauses in spending bills and likely would have forced a much bigger conversation about UN Involvement against the interest of our allies.