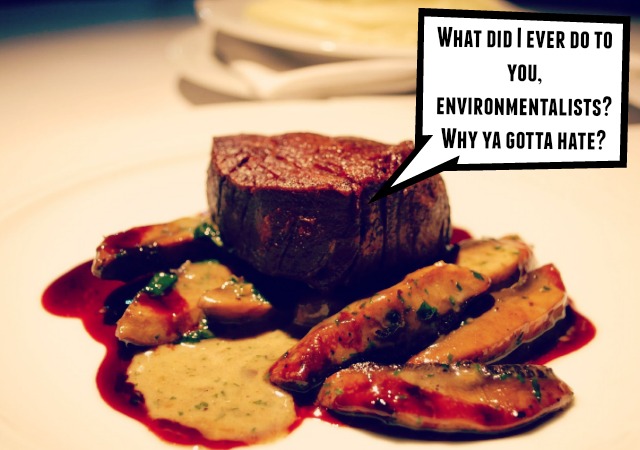 The USDA’s recommendations eventually trickle down into school lunches and other federal programs. Every five years the USDA updates their dietary guidelines. Remember when we lost the iconic food pyramid to the “My Plate” thing? That was all the USDA’s doing.

According to the AP:

That means that when the latest version of the government’s dietary guidelines comes out, it may push even harder than it has in recent years for people to choose more fruits, vegetables, nuts, whole grains and other plant-based foods — at the expense of meat.

The beef and agriculture industries are crying foul, saying an environmental agenda has no place in what has always been a practical blueprint for a healthy lifestyle.

The advisory panel has been discussing the idea of sustainability in public meetings, indicating that its recommendations, expected early this year, may address the environment. A draft recommendation circulated last month said a sustainable diet helps ensure food access for both the current population and future generations.

A dietary pattern higher in plant-based foods and lower in animal-based foods is “more health promoting and is associated with lesser environmental impact than is the current average U.S. diet,” the draft said.

But what about the beef?

That appears to take at least partial aim at the beef industry. A study by the journal Proceedings of the National Academy of Sciences last year said raising beef for the American dinner table is more harmful to the environment than other meat industries such as pork and chicken.

In response, the National Cattlemen’s Beef Association sent out a statement by doctor and cattle producer Richard Thorpe calling the committee biased and the meat recommendation absurd. He said lean beef has a role in healthy diets.

Objections are coming from Congress, too.

A massive year-end spending bill enacted last month noted the advisory committee’s interest in the environment and directed Agriculture Secretary Tom Vilsack “to only include nutrition and dietary information, not extraneous factors” in final guidelines. Congress often uses such non-binding directions to put a department on notice that lawmakers will push back if the executive branch moves forward.

Who knew farm animals and other livestock that have all sustained mankind since there was a “mankind” are actually bad for the planet?

I would ask what environmentalists will come up with next, but I’m not sure I really want to know.

nearly 3 decades ago the government came out against saturated fats and pushed Americans into a high carb diet full of polyunsaturated fats. The result was Americans getting obese in record numbers, skyrocketing diabetes, and people consuming large amounts of transfats, which we now know to be unhealthy.

It’s long past time for the government to stop telling us what to eat. No government should even attempt to control the diet of its people. At this point it is clear that the US government sees us as subjects and not as citizens.

Make that “sees us as ‘Test Subjects’…”

You weren’t wrong the first time. It is more and more apparent with each passing day the the US government does, indeed, see us as subjects.

Hey, I’ve got some thoughts on what THEY can eat…

I bet it is high in protein.

The USDA has 1 bureaucrat for every 10 farmworkers – not farms or farmers – farmworkers. That means there are 3 bureaucrats just for our little family farm.

Too bad the Energy Dept. and the EPA don’t consider the environmental cost of producing ethanol

You mean their piles and piles of reeking, stinking, high piles of……

Meat is a much more efficient food source than grains and fruits. That said, this line of thought is (shall I say) bogus. That a Federal Department is attempting to pull this one over is really a shame on our form of government as it currently assembled. We do need to think of a much better way to persue our mutual compact.

The NLRB is suing McDonald’s, too. Happy New Year!

This set of dietary recommendations by the government, like the previous two sets, are not based on any rational connection to human health. As usual, they are unhealthily influenced by considerations that have nothing to do with human health.

Let them start with the White House kitchen and the food concessions in the Federal government office buildings. Publish their daily menus and recipes so that we may learn by their example. When White House State Dinners go mostly plant based, I will take their suggestions more seriously.

Little to do with health and the ‘climate,’ and all to do with control of the population.

We didn’t spend 4.5 million years clawing our way to the top of the food chain to eat broccoli.

The goal is to make us appreciate our future meals at FEMA camps.

A 2011 EPA scientific advisory board report lays the foundation for “food controls” well beyond meat. Switching to a low protein diet may not be sufficiently protective “if the new diet includes increased quantities of fruits, vegetables, and nuts, in addition to
staple grains, beans and pulses. Vegetables, fruit, and nuts are high value crops that typically require large inputs of fertilizers and pesticides when produced at a
large, commercial scale, and N fertilizer losses can be considerably larger than for grain crops.”

Reactive Nitrogen in the United States: An Analysis of Inputs, Flows, Consequences, and Management 2011– A Report of the EP A Science Advisory Board http://groundwaternitrate.ucdavis.edu/files/138962.pdf

You’d think the government was deliberately trying to create a sick, less intelligent population with their recommendations to choose sugars over fats and protein. Putting any child on a high carb low fat diet is abusive. Children need saturated fats for proper brain development.

A century ago, when nearly 40% of the adult workforce worked in agricultural, most of them for sustenance, and the average farm worker had a 3rd grade education, there was a point to a Department of Agriculture disseminating information about good crop practices, safe pesticides, etc.

Now they just hand out freebies and meddle in things they have no knowledge of or expertise in.

Time to close ’em down.

A scientifically sound diet, which has proven successful and healthy throughout both a glacial period and an interglacial period, is the paleolithic diet.

If they could figure out a way to make the meat on your plate go moo whenever you took a bite, they would.

They continue this constant push.

The lead post today talks about priorities. Let me suggest we shut down the section of the USDA responsible for this garbage (even though it will hurt the patronage supply for both parties). Shut down every agency that makes these silly recommendations and reserve the money saved for doctors.

Then, as we gut Obamacare, adjust the physician fee schedules to significantly increase the amount paid for primary care? This way a family could get personal nutritional advice from a real professional instead of a bureaucrat who listens to a lobbyist.

The real professional could take into account the family eating habits, what is available in the marketplace, cultural preferences for certain foods, etc. and the family will see improved health and less diabetes and strokes.

If these real healthcare professionals can get their patients eating healthier, we might see more folks on a ‘mediterranean’ type diet and meat consumption might go down on its own. Then, smart farmers and ranchers can export their product to countries who want our meat. All won’t be lost for the bureaucrats, the ranchers will then need more farm hands.

Why do we need any official government advice on nutrition in an age of free Internet advice? Granted, not all such advice is disinterested, but neither is the government’s.

LOL. I’m sitting here reading this article with two toasted bagels smothered in butter, cream cheese, bacon, and shredded pastrami with a bottle of IBC root beer on the side. On deck for dessert is key lime pie a buddy’s wife sent me home with.

Yeah. Go ahead. Write your guidelines. I’ll wipe my considerable ass with them.