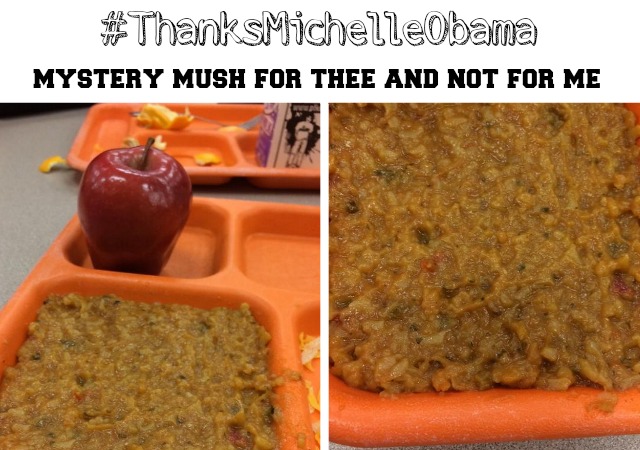 Warning: what you are about to see is…gross.

Mystery mush and other questionable “food” offerings being served to teens at public schools have made their way online, and the results are hilarious (and a little sad.)

Less than impressed by the First Lady’s school lunch program, teens are tweeting pictures of their school lunches using the hashtag #ThanksMichelleObama, as Buzzfeed pointed out.

The Health, Hunger-Free Kids Act passed in 2010 and championed by Michelle Obama is responsible for new restrictions on school lunches. Restrictions include limitations on sugar and caloric intake, and also require more veggies.

Last month, the Washington Examiner reported, “the nation’s school boards are joining in to demand that the Obama administration let them off the hook of serving the costly and tasteless meals.” The Examiner also reported the results of a survey that clearly indicated the meals are a not only gross, but a waste of money:

The survey of school leaders revealed:

— 83.7 percent of school districts saw an increase in plate waste.

— 76.5 percent saw a decrease in participation by students.

— 75 percent of school leaders want an increase in federal funding for school districts to comply with the new standards.

— 60.3 percent want flexibility for school districts to improve their ability to provide good nutrition without harm to instruction, personnel, and other school district operations.

With that in mind, it’s easy to understand why the kids being served these meals weren’t too terribly excited about eating their Michelle Obama-approved lunches:

Smh..Went to a school luncheon for thanksgiving and this is the crap they are serving children? #ThanksMichelleObama pic.twitter.com/0D7j3nUzjl — Erin Harris (@Erin1Harris) November 21, 2014

Had a very #healthylunch today. The apple definitely made up for the “mystery mush” #ThanksMichelleObama pic.twitter.com/RWCnQRCxJK — Hunter Whitney (@huntwhitney4) November 13, 2014

Meanwhile in France, kids are served delicious three course meals like this one: 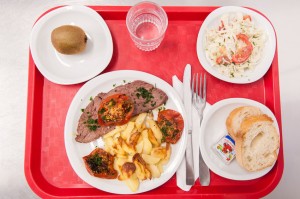 Taking a similar approach, the French are also health conscience and bring in dietitians to assist in the planning of their menus. Yet the results are dramatically different. Mind Body Green writes:

Menus are set up two months in advance by the cantine management staff, and then sent to a certified dietitian who makes small “corrections.” The dietitian might take out a small chocolate éclair and replace it with a kiwi for dessert if she thinks there’s too much sugar that week. Or she may modify suggested menus by adding more or fewer carbohydrates, vegetables, fruits, or protein to keep the balance right.

Almost all foods are prepared right in the kitchen; they’re not ready-made frozen. This means mashed potatoes, most desserts, salads, soups, and certainly the main dishes are prepared daily. Treats are included — the occasional slice of tarte, a dollop of ice cream, a delicacy from the local pastry shop.

Say what you like about the French, but they always get food right.

Wednesday was “Mexican food day” in the San Antonio Independent School District when I was in high school.

The best cheese enchiladas I’ve EVER had, Spanish rice, and chocolate cake that went with the rest REALLY well. For $.25. It was the only day I’d eat in the cafeteria, since we were allowed off-campus at lunch in those days.

As more and more Federal money has been pumped into increasingly failing monopoly government schools, the Feds have imposed more and more control over them.

The food reflects the crap we feed our kids in place of knowledge and understanding. And we pay a premium for it in a number of tragic ways.

I remember a day where a congressman with a D by his name held up a packet of ketchup and said that it qualified as a vegetable under the rules of Reagan and Bush.

Now those very same politicians impose something worse on my children.

I’ve seen my dog throw up stuff that looked more appetizing than some of these school lunches.

Why don’t we have the federal government mandate that all schools serve the same gourmet lunches that the Obama girls get at their $40k a year Sidwell-Friends school?

Because the Obamas are all about “social justice” aren’t they, and what could be more “fair” than that?

I remember telling my high schooler’s friends a few years ago when they started complaining about the lack of french fries and salt packets that this was Michelle’s initiative. They thought I was kidding them.

Now their growling tummies daily explain what government overreach actually feels like. It gets worse though, the National Academy of Medicine this past week issued a report on the “psychosocial vital factors” they want monitored for all people in the electronic health records.

I guess that’s what happens when the UN and the OECD announce that “subjective well-being” is to be the primary focus of governments in the 21st century.

I kid you not. I have the reports.

‘”report on the “psychosocial vital factors”’ Already happening. Last time I visited my doctor I had to fill out a form with this dribble on it. Even if you suffer from any of the items on the list, this is not the time to be truthful. Seek help, but don’t let the government know what your problem is.

Yeah, I went to the emergency room a couple of months ago, and I couldn’t believe the questions on the intake form, for a sore throat!

I told them I wasn’t answering them, I was there for a sore throat and sinus infection….

I wondered what was up with those. Bizarre waste of time and money.

My last visit to the saw-bones was the same… all kinds of BS questions ranging from “feeling sad sometimes” to whether or not my stairway has a handrail and my shower a grab-bar. Of course I am never sad and my home was built according to building codes, so yeah, I’ve got those things.

I was waiting for the “firearms” questions but they did not come. Maybe because I’m a [medical] ward of the gubmint (Medicare) and live in a rural area they just assumed no kids in the place and all us hillbillies have guns. The answer obviously would be “no”. 🙂

But no blood screen, no PSA despite family history… “the new standard says its not necessary every year…”
No death panels my a$$!

It looks like they’re trying to prepare the kids for a lifetime of incarceration.

It appears the Cafeteria’s are saving Millions on their grocery expenditures.
Have they reflected any of those savings in their budgets?
Let me guess…..

Nobody is happy about it.

On the bright side, the media has stopped reporting Michelle’s personal lunch and dinner outings altogether. Wonder why?