Mark Levin and Jonathan Gruber once agreed: No Obamacare subsidies on federal exchange

Mark Levin and Jonathan Gruber once agreed: No Obamacare subsidies on federal exchange 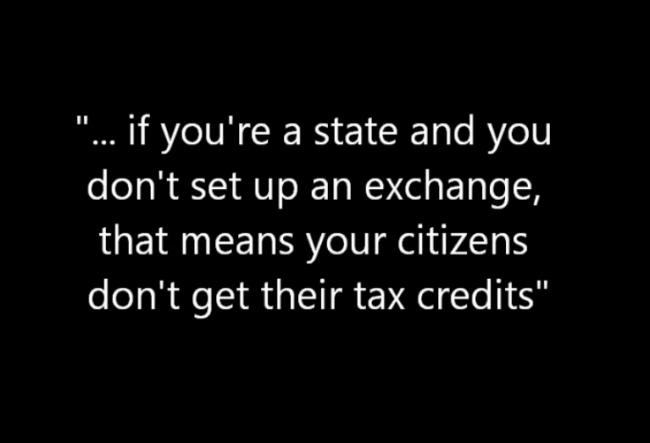 You will recall that the legal issue is whether the IRS violated the express provisions of Obamacare by issuing rules allowing taxpayers to claims federal subsidies when purchasing on the federal exchange, even though the language of the statute appears not to allow that.

In King, the Fourth Circuit ruled that there was possible ambiguity and another potential reading of the law, such that apparently clear language was not that clear, giving the IRS leeway to interpret the statute. In another case, Halbig v. Burwell, a D.C. Circuit panel had ruled that the subsidies were not available on the federal exchange, but that ruling was vacated pending the entire D.C. Circuit Court hearing the case en banc.

In a surprise move, the Supreme Court agreed to hear the King case even though there was no split in the Circuits (after the Halbig decision was vacated).

King will be one of the biggest decisions of this term, and if the Obama administration loses the case, it could be the death of Obamacare as we know it, because 37 states have refused to create state exchanges. Obamacare is affordable only with subsidies, and if the subsidies are not available to citizens of 37 states, the system likely collapses.

One key issue is whether the wording of the statute was a mistake or misstatement, or reflected a logical policy. Obamacare was set up in such a way as to put pressure on states to create state exchanges by providing for federal subsidies in the form of tax credits only for purchases on state exchanges. This was a conscious decision, as explained by none other than Jonathan Gruber:

Into the fray leaps Mark Levin and his Landmark Legal Foundation, which just filed a friend of the court, Amicus Curiae Brief. The full Brief is embedded below.

Here is a portion of the Summary of argument:

This is a case about first principles. The Executive Branch has not only exceeded the boundaries of the legislative power, but has done so in an effort to circumvent the principles of representative government to avoid securing the consent of the governed. The Executive Branch asks the Court to give its imprimatur to unilateral Executive Branch modifications to a tax credit scheme established in the Patient Protection and Affordable Care Act (ACA), Pub. L. 111-148, 124 Stat. 119; 26 U.S.C. §§ 36B(b)(2)(A), 36b(c)(2)(A)(i). In particular, the Internal Revenue Service (IRS) has issued a regulation making certain tax credits available to individual taxpayers who purchase individual health insurance policies through a state-specific marketplace. The question is whether the IRS has the constitutional authority to make tax credits available in every state regardless of whether a state insurance marketplace (defined as an “Exchange”) complies with the enabling statute. Id.

The Executive Branch, through the IRS, seeks to rewrite the statute’s unambiguous text by issuing a regulation conflicting directly with the law’s plain meaning. 26 C.F.R. 1.36B-1(k), 1.36B-2(a); see 77 Fed. Reg. 30,377 (2012). The result is a fundamental policy change effectuated without the Legislature’s input….

The statutory language at issue in this case is clear and unambiguous. That should be the end of the Court’s inquiry. Amicus Curiae Landmark Legal Foundation respectfully urges the Court reverse the United States Circuit Court of Appeals for the Fourth Circuit. Particularly when the Executive Branch is led by a president intent on “fundamentally transforming” the nation by using his “pen and phone,” it is incumbent on the Court to preserve the separation of powers in every instance. Jennifer Epstein, Obama points to 2014’s pen-and-phone strategy, Politico.com, Jan. 14, 2014, http://politi.co/1hTKkcu.

These are points similar to what I have made in dozens of radio interviews lately and in my Op-Ed in USA Today, Constitution’s horrible, no good, very bad year.

Mark Levin and Jonathan Gruber agree on how the law was written, it’s just that Gruber is backtracking now that video has come out of him taking positions, numerous times, that contradict the Obama administration’s legal position.

I don’t know to what extent the Supreme Court would consider Gruber’s comments, but regardless, the plain language of the statute should prevail, and Obamacare subsidies on federal exchanges should be tossed out.

If the law isn’t what the law says it is then what good is the law? Once again, John Roberts, IMO, will vote the way Obama tells him to. I’d really like to know what Obama has on Roberts. Is there really a B613?

Exactly! Except were SCOTUS to decide that the law as written will not be followed, then we would then no longer be a nation of laws, we would be then a nation of man, ruled by such. That ruling against the plain black letter reading of the ACA law would portend the end of the US. What would replace the US: a strong man ruler, a benign and kind ruler, a wise and thoughtful man, an idiot figurehead, a despot, or perhaps a triumvirate?

A SCOTUS ruling like that would raise the question yet again, why was this nation established? Perhaps even answer the question of what are we as a nation? Or, how will the US end?

This country was not established for Obama’s sake nor for any ruler’s sake. To hell with any such “ruler.” And, that would be the result of an adverse ACA decision against the written law.

We haven’t been a nation of laws since Obama was elected. That the idiot populace reelected that hack just shows they want to be ruled.

Obama really screwed us with this. Once the federal subsidies are tossed (I hope) there will be a lot of people who are unable to afford insurance thanks to federal mandates on they types of insurance that can be sold. There won’t be any affordable options for those people and we’re going to end up with vastly more uninsured people than before the legislation was passed.

What are the republicans going to do to make sure the people who are being harmed will have any kind of access to insurance? I keep hearing “repeal!” but what’s going to replace it?

“I keep hearing “repeal!” but what’s going to replace it?”

Uh…how about “Not a damned thing!”?

The issue is that many people, particularly self employed people (think very small business owners) find themselves priced out of the market due to federal and state government mandates. If someone else is signing your paycheck and taking on the responsibility of providing your insurance, it’s not a big deal if the fed or your state requires levels of coverage that are completely unnecessary for YOU. When you have to find your own insurance in a very limited market, particularly in a shitty economy, you discover very fast how government interference has been driving up the price of insurance for decades. Repealing the ACA isn’t going to change that. The fed and states will continue to pander to people who want everything covered and the insurance companies will lobby those entities to make sure everyone is forced to purchase a specific level of insurance to spread the cost out to everyone.

Truly. You don’t make a bad idea good by making it less bad. The Republicans have a bad habit of replying to crappy, socialists ideas with their own, slightly less crappy and slightly less socialist, ideas, instead of standing on principle and saying, “That’s a bad idea, it’s bad for the country and the people, and we will not support it. Period.”

The problem is that politicians want to be able to say to their constituents, “This is what I did for you.” They have to learn to say, “This is the disaster I prevented from happening.”

We were a lot better off before ObamaCare so the best solution is to kill it and return to what we had previously.

If Congress decides design a new medical insurance system the only rational solution is to require that everyone have an inexpensive policy that covers catastrophic care. So when your medical expenses are so expensive that it is impossible for you to pay it.

A basic rule of statutory construction had once held – in the days before Democrats held that laws mean what they (the Alice-in-Wonderland Democrats) say they (the laws) mean, nothing more, nothing less – that if you as judge have two interpretations of a law, one unambiguous which comports with the statute and its other parts, and one that is ambiguous, the decider always chooses the former.

Is that still a rule?

C-SPAN recently aired an interview Supreme Court Justice Elena Kagan gave at Princeton University. She rather emphatically said, in effect, that the rule you cited still applies. The entire interview is in the link below. Start listening about the 25:50 mark to get the full context of the question about her judicial philosophy. She drops the bomb that ‘the text trumps everything’ in statutory interpretation at about the 27:10 mark.

If she really means what she says in this interview, she MUST vote to say that the IRS does not have the authority to deem that people who buy insurance on a federal exchange qualify for subsidies. The statute written by Congress and signed into law by the President clearly and unambiguously states that subsidies are only available to people who purchase insurance on an exchange established by a state (with state being a clearly defined term).

I’ve been amazed that these few minutes of the interview have gone unnoticed in the conservative blogsphere.

Again, start listening at the 25:50 mark and listen for a couple of minutes.

I like the emphasis at the outset that congress can freely change the law as written if they don’t like it. It is like reminding the court that the sky will not fall if they merely acknowledge and enforce the obvious plain meaning in the legislation.

Which is sadly a direct rebuttal to what will be the government’s entire argument..