The appearance of politics 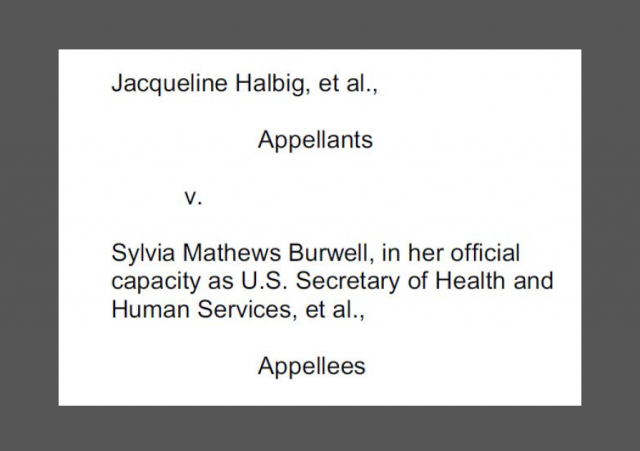 I don’t know how I missed this yesterday. Actually, I do know. I was off the internets for most of the day, and the world kept turning without me.

The D.C. Circuit Court of Appeals granted (Order embedded at bottom of post) en banc (full court) hearing in the Halbig case, in which an appeals court panel found that the IRS had no authority to grant people who signed up for Obamacare on the federal exchange tax subsidies which, under the statute, were only for those who signed up on state exchanges.

The same day as the original Halbig decision was released, the 4th Circuit Court of Appeals reached a different conclusion.

The split in Circuits convinced just about everyone that the case was on the fast track to the Supreme Court.

But many speculated at the time that the D.C. Circuit, packed with Obama appointees, would take the case en banc, uphold the IRS regs, and avoid a Circuit split. I didn’t think that would happen, but I was wrong.

This morning the U.S. Court of Appeals for the D.C. Circuit granted rehearing en banc in Halbig v. Burwell, one of four cases challenging the lawfulness of an IRS rule authorizing tax credits and cost-sharing subsidies for the purchase of health insurance in federal exchanges. According to the challengers, the IRS rule is illegal because, among other things, the PPACA only authorizes tax credits and subsidies for the purchase of insurance on exchanges “established by the State,” and the PPACA expressly defines “State” as one of the 50 states or the District of Columbia.

Today’s decision by the D.C. Circuit to grant en banc review of Halbig v. Burwell is unwise and unfortunate. It has the appearance of a political decision, and will likely only delay Supreme Court review. It does not necessarily presage the outcome of these cases, and I predict that even if the administration wins, it will lose ground before the full D.C. Circuit. But a ruling overturning the Halbig decision will be perceived as political, and understandably so.

The Halbig ruling does not require review. A three-judge panel of the D.C. Circuit correctly applied the law when it held that Congress authorized health-insurance subsidies, as the Patient Protection and Affordable Care Act says, only “through an Exchange established by the State.” The health-insurance Exchanges the federal government established in 36 states were not “established by [a] State,” and there is nothing in the PPACA to suggest Congress understood those words to mean anything other than their plain meaning. The Halbig ruling was authored by Thomas Griffith, a judge supported by President Obama when he was a senator and praised by prominent Democrats for his fair-mindedness.

Does that make this a politicized decision? Well, it’s certainly rare and unusual. The DC Circuit almost never takes this route; last year it reviewed none of its cases. This year, it reviewed two.

I agree that given how politicized everything regarding Obamacare is, this en banc maneuver has the appearance of politics, even if it is not actually politically motivated or a reflection of the new composition of the court. Why not just let it go to the Supreme Court, which is where it was heading?

Prediction: if the case is decided 8-5 in OBama’s favor, the press will go on at length about how political those 5 deniers were.

I think the Dems perceive that, the longer the ACA is in place, the less tempted Roberts’ court will be to cripple it. They may be right. I hope they aren’t.

That won’t matter. Whatever ever they had on Roberts before, they still have.

“Why not just let it go to the Supreme Court?”

Because a loss there effectively kills ObamaCare forever. Without the subsidies, the people just cannot afford the premiums. It all just falls apart, in about a week.

This is why Harry Reid blew up the filibuster rules to fill the vacancies on the DC Circuit, which wasn’t urgent, while continuing to ignore many vacancies which desperately need filling (as does Obama).

I think the technical legal term is “Head ’em off at the pass!”

This shouldn’t be a problem of a slight majority can read, and apply the most basic canon of statutory interpretation.

Therefore, I predict it will be a problem…

The key point is that this action completely precludes resolution of Halbig in 2014, which means that exchange subsidies can go forward for 2015, which in turn means no rate shocks to interrupt the 2014 elections.

And depending on how quickly they proceed, the Supreme Court may not get to vote to hear the case before Fall 2015. Justice delayed is…

Beyond that, I guess we’ll see how Reid’s investment in these judges by ending the fillibuster will pay off – whether these judges will act as political partisans, or whether they will still show some allegiance to the quaint concept of the rule of law. The tea leaves are not encouraging.

You seriously question whether or not those judges will act as political partisans? That’s precisely why Obama appointed them and why Reid used the Nuclear Option to get them confirmed

People will often surprise you. Some happily. Some not.

I choose to live in hope, while insisting on my residence in Realville.

Whether or not Halbig was correct or not, since I need those subsidies (or I can’t afford health insurance at all), and I live in a state w/o its own exchange, I am rooting for the full D.C. circuit to reverse the original decision and shut the whole thing down.

This of course is a completely self-interested position on my part and has nothing to do with the merits.

It would be better for everyone if ObamaCare was killed. You could buy reasonably priced insurance and so could everyone else.

Can the plaintiffs basically go around the D.C. Circuit court and ask for a Supreme Court review anyway?

They could, but it won’t. The theory is: why do work when your underlings can do it and maybe get it right?

I think Immolate is right. The longer any portion of Obamacare remains in place, the less likely we will ever get rid of it.