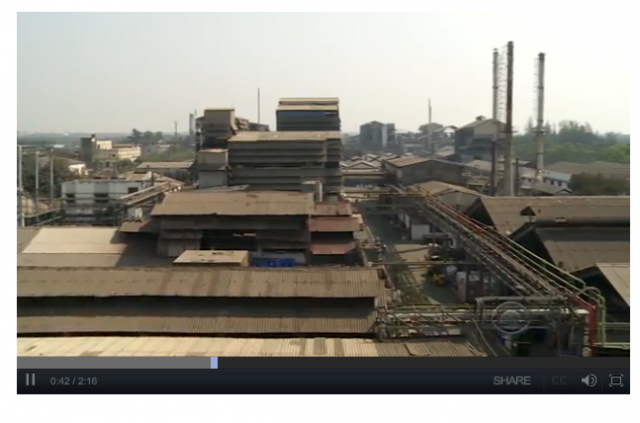 In an ill-omened trip, Secretary of State John Kerry headed to India to pave the way for a climate change deal, missing the important Paris march against terror.

I was skeptical that the Indians would warm to any carbon emissions agreement, given the level of poverty in that country and need to rapidly modernize its industry.

He should have listened to me, because he just emitted a whole lot of greenhouse gas for no reason. The Indians rejected the deal.

President Barack Obama has left India for Saudi Arabia without inking a climate deal that formed much of the basis for his second trip to the subcontinent.

The Hindustan Times reported on Tuesday that India has refused to embrace the idea of a ‘peaking year’ for greenhouse gas emissions – a designated year after which emissions levels would have to start decreasing.

China agreed to that sort of framework last year, but Indian officials now see being lumped in with Beijing as a negative thing. India is the world’s fourth-biggest carbon emitter. China is number one.

‘Having a peaking year was not acceptable to us,’ an Indian environment ministry official told the Times.

Obama visited India on Air Force One, a plane that burns five gallons of jet fuel for every mile it flies. His round-trip, including a stop in Saudi Arabia, will emit 809 tons of CO2 into the atmosphere.

The President did offer the Indians $1 billion to develop green technology to sweeten the deal…which is fascinating, because American green technology ventures sponsored by this administration have been man-made disasters.

The President tried to tempt the Indians with an apology, too:

President Obama apologized for the role the United States has played in global warming during a speech in India, but that didn’t convince the Asian nation to sign a deal to put a limit to future greenhouse gas emissions.

“… the United States recognizes its part in creating this problem, so we’re leading the global effort to combat it…” Obama said during a speech from Sirifort, New Delhi, on Tuesday.

In light of his failure, Obama tried to pack a guilt trip for the Indians before he jetted off to Saudi Arabia:

“I know the argument made by some – that it’s unfair for countries like the United States to ask developing nations and emerging economies like India to reduce your dependence on the same fossil fuels that helped power our growth for more than a century,” Mr. Obama told an audience of 1,500 mostly young Indians at Siri Fort Auditorium on the final day of his trip here.

“But here’s the truth,” he added. “Even if countries like the United States curb our emissions, if countries that are growing rapidly like India with soaring energy needs don’t also embrace cleaner fuels, then we don’t stand a chance against climate change.”

Between the gaffe-tastic gum chewing and the cold reception to the climate change deal, it confirms that the bad signs during Kerry’s trip were real portents of more #SmartPower failures.

And I’m liking our apologizer-in-chief less and less.

Yes, you have to respect the “No” even in the face of the billion dollar bribe. Unlike the Chinese who of course are going to use Obama’s stupidity and naivete as a weapon against us.

But my real question is, after six years, how can you possibly like Barry any less than you already did? In my book he’s lower down than whale shit.

I mean, the crap with Israel’s election, the confab with the Muslim Brotherhoodlems, Cuber, inviting the invasion and colonization of the United States…

The guy is creative in how he works to screw over our nation. That much you have to allow.

I will grant you that he is relentless in his stupid and destructive behavior. I knew his presidency would be bad, but I truly had no idea he would be this epic in his failure. I’m not normally a conspiracy-nut sort of person, but the odds simply don’t favor this many colossal f-ups being accidental, do they?

But my hate-o-meter doesn’t go past ten, and he’s been there for a long while now.

“But my hate-o-meter doesn’t go past ten, and he’s been there for a long while now.”

Mines been pegged since the first election.

I am impressed with his decision to not get involved with Obama’s faux battle with “climate change.” Modi did vow to increase development in the country when he was elected, which is so badly needed. The level of poverty there is horrible. Although, I do fear for possible religious persecution under his administration. We shall see what the future brings. At least he appears off to a good start.

If our President ever grows up, I want him to be just like Benjamin Netanyahu.

That would be a real climate change.

Must have been the gum.

Seriously… India could use some electric carts.

Also if they would burn about 50% less garbage in the streets, jogging might be viable.

Andy, I assume you are referring to the huge amount of garbage thrown in the streets. if they would at least provide trash “pickup” they would not burn it in the streets. That would also help alleviate some of the disease problem.

Oh we can throw the women in there to, can’t discriminate….

“He [Kerry] should have listened to me, because he just emitted a whole lot of greenhouse gas for no reason.”

Obama is the first US president, in fact, the first leader of any country, to bat 0.000 on his foreign policy agenda. He’s failed every time.

Ah, THAT depends entirely on what his intentions were.

See, I’m of the “NOT incompetent” persuasion. I think Pres. ScamWOW has been VERY successful in achieving his ends. Those ends have come about by design, both domestically and in foreign affairs.

Every day the world is a more dangerous place, and the U.S. a weaker nation in general.

Oh, I quite agree. I left out a word. How about this:

“Obama is the first US president, in fact, the first leader of any country, to bat 0.000 on his STATED foreign policy agenda.”

and Remember… Obama is our 1st alien president – from upper Uranus I do believe.

I’m starting to think the average Indian is smarter than the average American. Sad to say.