Can Obama conduct diplomacy and chew gum at the same time?

Can Obama conduct diplomacy and chew gum at the same time?

Indian media seem to think not. 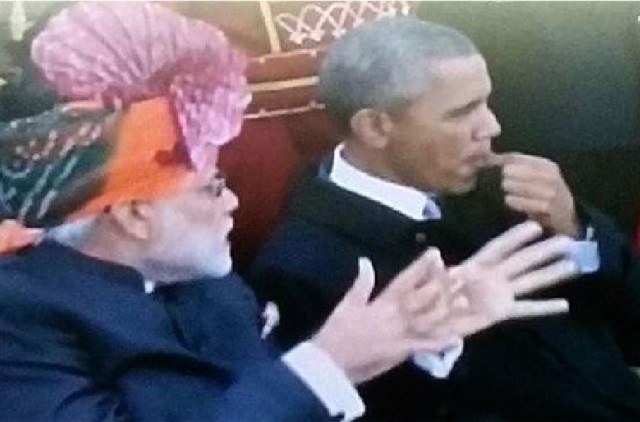 In determining why Secretary of State John Kerry was not at the Paris march of world leaders denouncing the terror attacks there, I noted he was paving the way for President Obama’s upcoming visit to India.

President Obama and his Indian counterpart broke through a five-year impasse on Sunday to pave the way for American companies to build nuclear power plants here as the two countries sought to transform a fraught geopolitical relationship into a fresh partnership for a new era of cooperation.

…The amity between the two leaders was palpable from the start as Mr. Modi broke with protocol to greet Mr. Obama at the airport with a warm handshake and hug. During their later public appearance, Mr. Modi referred to the president as “Barack” and thanked him for his “deep personal commitment” to their friendship. In a toast at a state dinner Sunday evening, Mr. Obama returned the favor, calling Mr. Modi “my partner and friend.”

“This new partnership will not happen overnight,” Mr. Obama said at the earlier appearance. “It’s going to take time to build and some patience. But it’s clear from this visit that we have a new and perhaps unprecedented opportunity, and deepening our ties with India is going to remain a top foreign policy priority for my administration.”

A TIMES NOW video offers a glimpse into the initial meeting in India.

Perhaps the most publicized aspect of the trip was the important and highly ceremonial Republic Day parade.

An otherwise productive and useful trip was, ahem, gummed up when Indian media complained about Obama’s etiquette.

The Times of India notes that the country’s social media was aghast at the site of our President chewing gum during this important event:

Barack bhai working his jaws overtime and chewing gum! At least it isn’t gutka. But seriously – gum during a formal parade?

In an ungainly sight, cameras caught US President Brack Obama chewing gum during the Republic Day parade on Monday.

In the picture captured by cameras and posted on Twitter by some users, Obama was spotted removing his chewing gum while PM Modi was seen trying to explain something to the US president.

The Weekly Standard has the video:

Other reports focused on the policy discussions. It appears as if there has been a significant thawing in the relationship between the two countries, especially in terms of aiding India develop its nuclear power capabilities:

The two countries reached an understanding on two issues that, despite a groundbreaking 2006 agreement, had stopped U.S. companies from setting up reactors in India and had become one of the major irritants in bilateral relations.

…Between a working lunch that included kebabs made with lotus stem, figs and spices and an evening banquet where Obama spoke a smattering of Hindi, the two leaders got down to talks.

They emerged with a 10-year framework for defense ties and deals on cooperation that included the joint production of drone aircraft and equipment for Lockheed Martin Corp’s C-130 military transport plane.

Other deals ranged from an Obama-Modi hotline — India’s first at a leadership level — to financing initiatives aimed at helping India use renewable energy to lower carbon intensity.

But Modi cautioned that work was still needed to create a solid partnership between the world’s two largest democracies.

“We have to convert a good start into lasting progress. This requires translating our vision into sustained action and concrete achievements,” he said, standing next to Obama.

After the gum-chewing, the Indian’s most significant coverage of the trip was focused on the civil nuclear cooperation agreement, which has been moribund since 2008. The Times of India also reports that Obama is using his executive order to eliminate a sticking point.

With Obama using his executive powers to roll back the condition that US authorities be allowed to monitor use of nuclear material purchased by India even from third countries, the two leaders successfully finalized the terms and conditions for operationalizing the civil nuclear deal.

In his press statement in which he confirmed the development, Modi said US and India shared a natural global partnership. Indian officials attributed the successful conclusion of nuclear talks to Obama’s intervention as intrusive inspections by US authorities was the lone issue that was threatening to derail the contact group meeting last week in London.

The President will be cutting his visit short: Following a speech early Tuesday morning, he heads to Saudi Arabia to pay respects after the death of King Abdullah.

While it is heartening to know that the alliance with India is stronger in the wake of the visit, it will be interesting to learn what our Congress will make of this executive order.

Obama is likely to go through a Ganges River worth of ink signing such orders before his term is concluded. Hopefully, this is one that helps our country and builds a regional alliance we could really use.

Which leaves the age-old question: Is it possible to conduct diplomacy and chew gum at the same time?

[Featured image via The Weekly Standard]

Did Obama find that gum under his seat?

Apparently, the narcissism and hubris are so strong this poor, sick chil’ cannot learn.

To the extent that it is within the domain of Congress to formalize this agreement between India and the United State, our legislature should raise the issue, debate it, and present the President with a bill for his signature. They should not be mute if the President decides to act unilaterally, even when they agree with the action, unless it is clearly the President’s responsibility to decide on his own.

Darn you, Leslie, for making me think, however briefly, that we had a new Secretary of State, lol. (Kerry/Karry)

Henry: Freudian slip, perhaps? Fixed…but sorry for us both it isn’t true. 😀

I’m not a spelling/grammar Nazi, I just know these articles get linked all over the Innertubes. Must look nice for company!

I know you’re not — which is one of the many reasons I like you!

Awwwwww (blushing, looking down, toeing the dirt). Ah lock you too.

Is it possible he was gnashing Nicorette or something similar? I mean, that doesn’t excuse the breach of etiquette, but at least it might offer a rationale BESIDES “complete narcissist.”

IIRC he does still smoke, and might have had a bad craving right then?

Of course he’s chewing Nicorette – but for crying out loud, he’s had 6 years to kick the habit. He could also use a Nicorette lozenge or a NicoDerm patch to tide him over but no, he chews gum in public. So undisciplined. Just what we need in a president.

Why, the EPA ought to draft some regulations to limit and ultimately eliminate his expulsion of noxious gasses … he could tout them in the next SOTU as an effort to improve “O-zone” …

There are these things called “nicotine patches” that wouldn’t have him chawing like a teenager at a ball game.

One of the great and awful things about America is that any commoner can become President.

Some of us are commoner than others…

Or, in this case, the lowest common denominator.

Even an alien from Upper Uranus can be stuck in as president too!

When I was a boy I was told that anybody could become President; I’m beginning to believe it.

I don’t see any good news here. This is all fluff – and, since Obama’s involved, it’s predictably expensive fluff.

Oh right, that’s been holding back the American economy. Sure. If given a choice, I wouldn’t fly on an airplane with anything made in India. Indian manufacturers have been trying to get into the industrial vendor market for decades, but their stuff is the worst. They can’t touch the Chinese, either on price or quality. India has successfully dominated in very low-level industrial production of things like ebony or rosewood chinrests for violins. But their attempts to move into, say, the machine-tool market have been dismal; during the same time, the Chinese have upped their quality dramatically.

an Obama-Modi hotline — India’s first at a leadership level — to financing initiatives aimed at helping India use renewable energy to lower carbon intensity.

This means the US is going to give India a bunch of money to do nothing worthwhile. I can see why India would be big on that, but why would the US?

“We have to convert a good start into lasting progress. This requires translating our vision into sustained action and concrete achievements”

This means that the US is supposed to keep that money tap open.

It is? India was a Soviet client for decades, which is why the US was much closer to Pakistan during the Cold War. And now, how exactly does the US benefit from any sort of alliance with India?

India is certainly a regional power, and it should be treated seriously as such. But it doesn’t follow that sucking up to India is of any use to the US unless perhaps there’s a serious swing away from Pakistan, as Pakistan is a much bigger problem in the Terrorist Era than is India. But effective steps against terrorism, Pakistani-based or otherwise, are probably not at the top of Obama’s “to do” list. So is this just more of Obama’s strange urge to grovel before everybody who isn’t actively avoiding him?

ghetto is ghetto… and that’s all Obola will ever be, no matter where he goes or how much money he has.

I wonder if his doctor explained to him that chewing and playing with it is an unsanitary habit.

Almost as unsanitary as chewing that gum he found stuck under his seat – from the last parade in India!

Modi will be sorry he got in bed with obola. I expected more from Modi.

On the other hand, Modi probably realizes that the Obama administration has the negotiating ability of a third grader and plans to cream off as much as he can.

Think about how many hands a visiting US president shakes during such a visit. The question is whether Obama gave or received more infectious bacteria and viri.

Forgive me the thought running through my head right now.

I think he found that gum under his seat!

Well, that’s perhaps the one thing I can agree with the Iranians on.

The hug was revolting.

Is that his hair, or is he wearing a clown wig? (And Modi’s is kinda weird, too!)