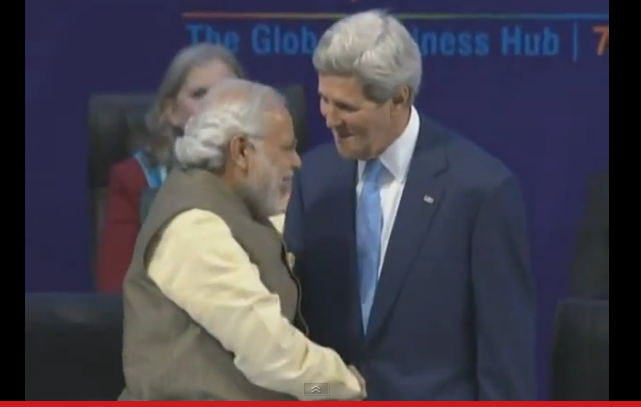 Secretary of State John Kerry met with Prime Minister Narendra Modi on Sunday to promote economic ties with India and set the stage for President Obama’s visit later this month.

“The goal is to have very concrete and tangible things that we can show forward movement on when President Obama and Prime Minister Modi meet, including on climate change,” a senior State Department official told reporters.

Mr. Obama is planning to attend India’s Republic Day celebrations on Jan. 26. It is the first time that an American president has been invited to the event as the nation’s chief guest.

Negotiations between India and the United States on issues like climate change, an agreement on civilian nuclear plants, military purchases, and investment and manufacturing rules have quickened in recent weeks because of Mr. Obama’s coming visit. But it remains to be seen whether the president’s trip will be mainly symbolic or if it will lead to significant agreements.

At this point, I am placing my bets on “symbolic”. This particular trip seems to have been filled with some very bad omens.

To start with, Kerry was absent from the historic Paris March that captured the attention of the world. 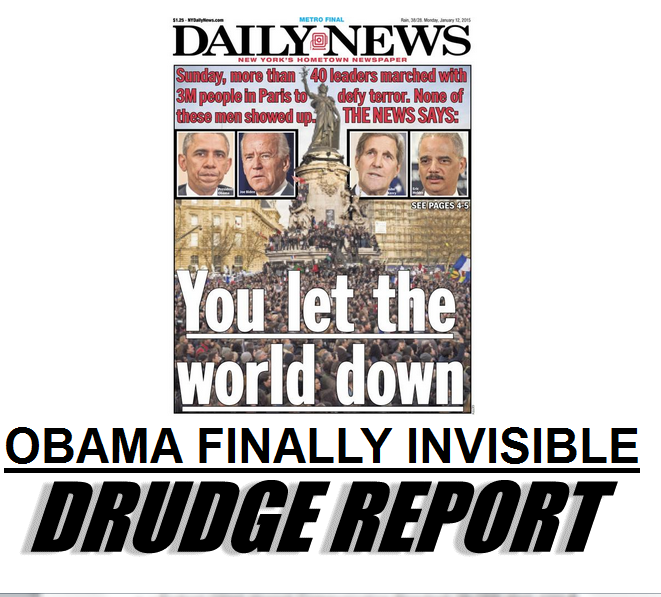 However, unlike the other three depicted, at least Kerry had a reasonable excuse: He was at that conference with Modi.

The one glitch: A key focus of that meeting was climate change.

Cato at Liberty contributor Patrick Michaels has this analysis:

Secretary of State John Kerry is currently in India as advance guard for President Obama’s visit later this month. The president is going there to try and get some commitment from India (or the illusion of a commitment) to reduce its emissions of dreaded greenhouse gases. Until now, India, along with China, has resisted calls for major reductions, effectively blocking any global treaty limiting fossil fuel use. The president is very keen on changing this before this December’s United Nations confab in Paris, where such a treaty is supposed to be inked.

India is not likely to jump onto the “Climate Change Train” willingly. For example, Kerry cited that this supposed problem is harming the production of India’s farmers. Michaels points out that this claim is entirely false.  The country’s  increase in global yields has also been constant for decades. The Brookings Institute, no conservative think tank, basically noted that there needs to be an “India Exception” to climate change rules applied in any international agreement, given the nation’s large population of poverty-stricken people, lack of power sources, and need to rapidly modernize to effectively participate in the global marketplace to quickly raise the quality of living for its people.

…After two decades of economic development that have begun to lift sections of its population out of poverty, India cannot and will not let its development wait for the eventuality of commercially deployable and cost-competitive renewable energy. More than 300 million Indians still have little or no access to modern energy sources―India’s dilemma is that several generations of Indians are on the cusp of prosperity if growth is powered by cheaper energy.

The most accessible option is often carbon-polluting coal. In this, India is similar to all previous industrializing nations, from Britain, Germany and the United States in the 19th and 20th centuries to China in the recent past; all powered their industrialization, rural-urban transition and rise in per capita incomes with fossil fuels.

But India faces a predicament all previous countries that used energy to reduce poverty did not. It stands on the verge of industrialization just as the world may finally be willing to take multilateral action to reduce carbon emissions. Possessing vulnerable coastlines and reliant on the monsoon and glacial melt, India is as vulnerable as any to the consequences of collective action failure on climate. But for India, the tradeoffs between environment and growth are harsher than perhaps anywhere else. India’s overall size in both population and emissions accords it unique attention for a low-income country in the global climate debate; yet its relative poverty and low per-capita energy use compared to every other large emitter creates what Indians view as a justified overriding imperative for poverty elimination.

The final sign that the future relations between the two countries may not go smoothly? Kerry was involved in a car accident on the way to the airport.

U.S. Secretary of State John Kerry emerged unscathed after his motorcade was involved in a minor car accident in India.

…The SUV in which Kerry was traveling was rear-ended as it made its way through streets of the city of Ahmedabad, where Kerry had attended an international business conference.

I hope that this ill-omened expedition does not represent the high-water mark for our new relationship with India.

Just remind them that 0BOZ0 is our black messiah with a Nobel … that should clear things up. Ask Modi if HE ever received a Nobel!!

John Kerry, the gift that just keeps on giving … in to our enemies.

India has finally turn away from their foolish devotion to socialism per Gandhi, and its people are springing into modernity and prosperity as fast as conditions allow (“conditions” being vestigial government market impediments).

Modi hopefully will remember his people, and essentially spit in Barracula’s eye.

India would be an invaluable ally both geopoliticaly and economically right now, which is why I’m sure John Kerry and Obama will do absolutely nothing to bring us closer to them.

It appears India might be siding with fellow BRIC member Russia. Russia has been an ally historically. Other then that, I’m not sure why.

They need a counterweight to China. At least that’s the reason usually given.

And certainly Obama has shown that the US can’t be depended upon.

Unless obama bribes the Indians, I don’t think he’ll get much, if any, support for the climate change nonsense. India has pretty much thrown Greenpeace and other greenies out of the country. Was it the Indians who declared that AGW was a hoax? One of the countries in that area anyway.

May he get poisoned by John Boehner’s bartender.

Nothing will change that for either, and nothing should. Even if you are an environmentalist who worries about coal and carbon.

The single most reliable indicator of how well a nation cares for its environment is per capita income, which is almost directly proportionate. The only exceptions are leftist totalitarian nations, which tend to ignore those issues completely.

Except in the USA were although we are one of the wealthiest countries in the world the progressive fascists want to fight Global Warming because it will impoverish the country and give the government the power required to control every aspect of our society.