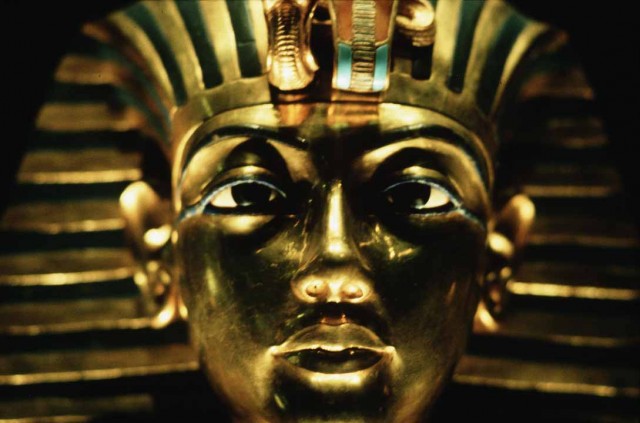 Egypt has three icons that symbolize its ancient glories:

1) The pyramids
2) The Great Sphinx
3) The golden mask of the boy king, Tutankhamun.

And while the pyramids and Great Sphinx are safe from the threat of destruction at the hands of Muslim extremists, the famous mask has been damaged by too much care and concern.

There are many versions of how the damage happened, but it seems the beard was accidentally knocked off and epoxy, which is designed for use on stone-work and not metal, was slathered on in the repair attempt. Additionally, the mask was scratched in an attempt to remove excess glue that had smeared.

However, it seems that one of history’s greatest treasures can be properly restored to its original glory.

German restoration specialist Christian Eckmann told reporters at a news conference at the Egyptian Museum in Cairo that the mask is not endangered, adding it can be properly restored after the glue is removed.

“It is a delicate operation,” Eckmann said. “It has to be done very carefully, but it is reversible.”

The beard fell off in August when the mask was touched during an attempt to adjust the lighting in its case, Eckmann said. The mask was then transferred to the restoration desk. After an unsuccessful attempt to re-secure the piece, it was decided that epoxy resin should be used.

The news of the marred mask didn’t come to light until this week, but quickly ignited concern and outrage among Egyptologists and conservationists.

“It’s ridiculous,” said Egyptologist Monica Hanna, who saw the mask Friday on display at the Egyptian Museum. The beard “has been glued back in a very bad manner. One centimeter of glue can be seen.”

Egypt’s civil unrest led to the looting of several museums, including the famed Cairo Museum, which houses the treasures from King Tutankhamun’s tomb.  During the mayhem, one of the golden statues was heavily damaged, and the heads were ripped off two mummies.

The mask is one of the most revered pieces of artwork from ancient times, so many Egyptophiles are following the news about this iconic piece closely.  It is not great press for the country, which is struggling to attract tourists back to the country after years of civil strife.

Hopefully, both the mask and the relative stability that Egypt once experienced before its experiment with Muslim Brotherhood leadership can be fully restored!

Well, I guess we know where Obama’s going to look for his next Cabinet secretary.

Sad, I am a fan of our treasures from history and what they can teach us about our past. This makes me truly sad, though I am glad it appears that it can be restored. I had the the privileged to see this mask on display before and you really don’t appreciate how breathtaking it is until you have actually laid eyes on it.

Another reason nothing should ever be “repatriated” to the Third World. I shudder to think of what the Turks will do to the Turkish Archaeological Museum if/when they go total Salafist.

What I would like to know is who the hell built the Great Pyramids? It sure as hell wasn’t the Egyptians!

Actually it was. Don’t think you’re better than them.

The people who did the building and the artwork are still there. These days they’re called Copts.

Never fear: medical science should at least be able to do for Tut’s mug what it did for Nancy Pelosi’s and Michelle Obama’s.

the beard broke in 1941 and was repaired in manner that lasted 70+ years, why wasn’t that method used again?
I know nothing of the metallurgy or processes involved but wonder if layer of molten gold would work.

Some people think we get smarter and more civilized over time. Well, tell that to the craftsman who made Tut’s mask thousands of years ago, and the incompetent, uneducated boob who “fixed” it.

Back in 1978, I was privileged to see the full and complete real King Tutankhamun exhibit, “The Treasures of Tutankhamun”, and not an exhibition of reproductions, at the Los Angeles County Museum of Art on a high school senior field trip. We and two other high school’s seniors, about 150 of us, had the entire exhibit and guided narration, by an actual Egyptian archeologist, all to ourselves for nearly half a day. It was staggering in its bounty and its beauty, and its ancient artifacts were just simply surreal. Over 3,000 years old… and it was all right there in front of us close enough to touch if not for the barriers. I got to see the Tutankhamun sarcophagus, the death mask, up close… as in about 7 inches from the shatterproof glass barrier. I’ll never forget the experience. It was once in a lifetime for sure. I’m saddened to see such shoddy care-taking. It certainly is a travesty and a terrible shame.

I saw this mask, along with many of the treasures, in the art exhibit at the National Gallery of Art back in the 1970’s. We waited for hours to see it – and it was breathtaking. I will never forget it.

I find it hard to fathom, to fully grasp, that anyone with access to these priceless treasures, the pride of Egyptians who are proud of their ancient roots, could bungle a repair of the priceless, solid gold death mask with its intricate inlay of precious stones this way…..