Professor Jacobson is right: With the acquittal of Egypt’s supposedly evil dictator Hosni Mubarak, we’re almost back to square one.

Square one minus many national treasures of unsurpassed beauty and historical importance, that is.

I have been following the nearly unreported news of the plundering of Egypt’s archeological sites for some time. However, in the wake of the newest phase of “Arab Spring”, the adherents of the Muslim Brotherhood have begun to bypass digging through Egypt’s graves, and now have targeted the museums directly.

From the Luxor Times: 1040 objects were stolen out of 1089 objects on display on Mallawi museum in Minia which was looted yesterday. Most if the rest if the big size statues were damaged as looters couldn’t transfer them.

The Mallawi Museum has a Facebook Page, listing the taken treasures (click HERE to “Like”/View page). One of the most significant pieces taken was this statuette of an Amarna princess (created around the era the famous King Tutankhamen reigned).

A key aspect to understanding Egypt is appreciating that most of its citizens value their ancient heritage. For example, during the first uprising, local citizens formed a human chain to protect the Egyptian Antiquities Museum on Tahrir Square from those seeking to damage or steal its priceless contents. The citizens of Luxor joined the most recent protests after ousted president Mohamed Morsi made a man connected with the 1997 slaughter of tourists at the Mortuary Temple of Hatshepsut at Deir el Bahari as governor of that area.

This video has just been released via Egypt’s Heritage Task Force. It depicts Egyptians reviewing the destruction of the Mallawi Museum. No translation is available, but it does convey true sorrow for the loss. The scope of the museums destruction is viewable about halfway through.

“It is a great loss and I am really saddened by what has happened to such a museum,” Minister of State of Antiquities Mohamed Ibrahim said. 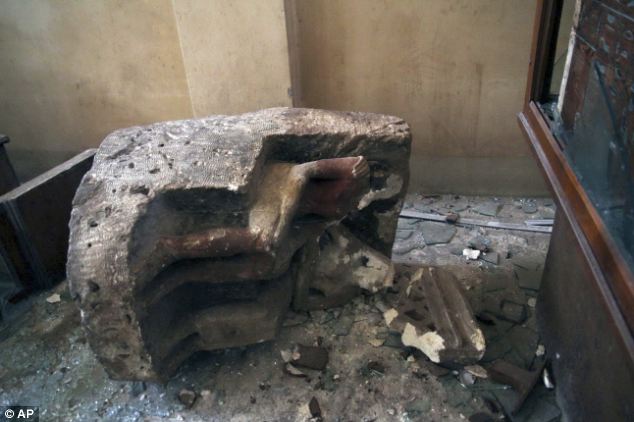 Upon viewing the remains of the museum, Egyptologist Terri Natale had this to say: “So much destruction by thugs . .unforgiveable . .the Muslim Brotherhood are like the Nazis.”

There I would have to disagree. The Nazis stole the treasures to care for them within their own museums or private collection. The Muslim Brotherhood’s followers want to sell them or destroy them as part of Egypt’s pagan past.

The list of stolen artifacts is now being distributed among all Egyptian ports to prevent any smuggling attempts, the antiquities minister continued. International museums, UNESCO and the INTERPOL are planning to put these artefacts on the Red List to prevent its trading and to return the items safely to Egypt.

Where is the outcry from the left? You know…the people who screamed bloody murder over the looting of museums in Baghdad.

Maybe everyone is just out of outrage.

When Egypt is labeled as part of the “Arab world,” it disguises the fact that Egyptians are heir to a much older and greater civilization. If everyday Egyptians understand that Islam scorns their magnificent heritage, they can help to lift the dead weight of Islam.

Likewise, many Iranians today understand that Islam, though it may have taken advantage of Persian achievements, is fundamentally hostile to the great and deep Persian cultural legacy.

A scholar whose name I’ve unfortunately forgotten (though I’d like to give credit where it’s due) has argued that one of the most powerful ways to beat back the Islamic curse is to awaken and encourage in various peoples a pride in their cultural roots — the culture that Arabs and Muslim converts have been attacking for centuries and trying to expunge.

Similarly, the left convinces Americans that our ancestry is evil, and must be purged from history.

The problem with that is that for many Muslims, history began with Islam, and the ancient things in Egypt are relics of the time of ignorance before their prophet, and are not things to be proud of. Further, it is historically true, and Egyptians know it, that the Copts are the descendants of the ancient Egyptians, the people who built those monuments (and who also were the skilled laborers building many of the early mosques in Egypt). Copts are treated as a despised ethnic minority, and “their” civilization is not “Arab.”

I had no idea Christianity ran that deep in Egyptian roots.

Learn something every day-

V.S. Naipul pointed out that Islamic regimes always try to wipe out the cultural and historical memories of the pre-Moslem past in the territories they conquer.

Radegunda, this is equally true in Northwest Africa, where the Berbers are heirs to a great, ancient culture. Morocco seems to understand this; their citizens point with pride to all the past civilizations and cultures that make them what they are today (see Michael Totten’s writings for a taste of this).

There is nevertheless a significant movement in Morocco to finally stamp out Berber heritage.

Wow, that Princess Armana chick had a really big head. Did she come from one of that old brother-sister marriages the Pharoahs used to do???

You know, not every little thought that enters the mind doesn’t need to be posted on the internet.

And every double negative doesn’t not have to be confusing.

Shit happens during war. Couldn’t happen to a more deserving bunch of thugs.

Now please allow them to return to killing each other.

IIRC, looting museums was, or used to be, a Very Bad Thing.

These items are jahiliyyah (“from the pre-Islamic period of ignorance”), and so are being destroyed by the Muslim Brotherhood. The destruction of non-Islamic cultural artifacts has been a notable act throughout Islam’s history. Much of Iran’s Persian heritage has been destroyed post-Khomeini. The primary purpose of the Muslim digs on the Temple on the Mount has been to destroy any and all Jewish artifacts found there, to in effect erase any Jewish claim to a history in the region.

Islamists destroy everything of value that falls into their hands.

Some people think it is the curse that comes from choosing savagery.

That is not true. . All of the Islamic architecture of great beauty still stand . They are just no keen on other styles.

The MB in particular, along with their Salafist allies, have called for the destruction of the Sphinx, the Pyramids, and all the ancient statuary and artifacts. To them, it is all idolatrous, an offense to islam. It’s the same mindset that led the Taliban to dynamite the huge ancient cliff carvings of Buddha in Afghanistan.

Ask yourself: Is destroying the heritage of other cultures, burning the churches and businesses of other faiths, and generally engaging in murder, rape, and mayhem in your diety’s name the signs of a “religion of peace” in any way?

We could bomb them back to the stone age………..never mind.

Well, it’s sad and all but frankly not a surprise.

Those people engaged in doing this are savages. They desire a return to a world 13 centuries gone and cannot accept the passage of time. They will certainly kill others to make the attempt they will also destroy what little intellectual heritage they can lay claim to.

If only they would commit mass suicide and let the rest of the world continue on in relative peace.

Do people realize how much of the worlds current turmoil, tragedy, injury and death can be laid at the feet of those who claim to follow Islam?

They’re aim seems to be the universal condemnation of all Muslims.

They are fast achieving their aim.

My first awareness of the Taliban came via news reports when they dynamited the Bamiyan Buddhas in central Afghanistan in 2001. They were not shy about why they destroyed these beautiful sandstone and stucco monuments from the 6th century. Having taken over the country, and being fundy Islamists, they considered them blasphemous idols and destroyed them. The western nations in particular were aghast and voiced complaints, to which the Taliban replied, essentially, “we won”.

I am sure these relics will find enthusiastic buyers in Europe & America.

Money makes the world go round .

It was wasted on them anyway.