My speech at Roc4Israel in Rochester, NY. 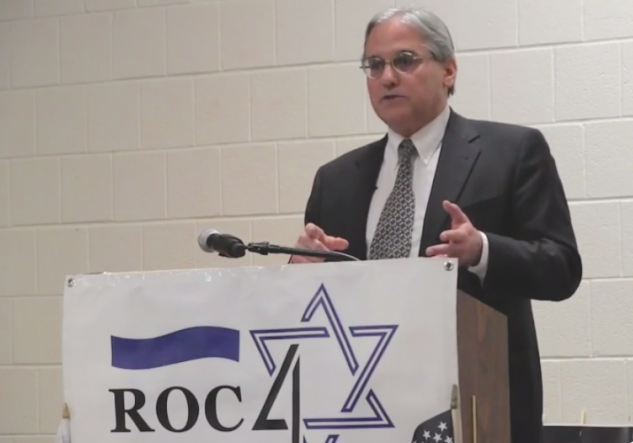 On Tuesday night, January 27, 2015, I spoke at the Rochester (NY) Jewish Community Center on the topic of Boycotting Israel – The insidious threat of the BDS movement

I was invited to speak by Rochesterians for Israel (Roc4Israel), a very active multi-faith group. The official attendance count was 354 people, quite a crowd.

Before my speech, the organizers played the video of the Cornell student harassed and attacked by anti-Israel activists on campus, as well as a video of aggressive anti-Israel campus activities:

In my speech I put the aggressiveness of anti-Israel student groups in context.

I focused on the academic boycott movement pushed by faculty professional organizations, which deprives faculty, students and the greater academic community of academic freedom.

There also were some really good questions about what can be done, how we got here, and how to respond on campus.

I had a chance to talk with some crowd members one-on-one, including Legal Insurrection commenter Philly Guy.

Thanks to Roc4Israel for the invite. The group can serve as a model for how Christians and Jews can come together to promote and defend Israel in a positive way.

Here is my speech:

Intifada is war. UC-Berkley is pro-war? They have to know that “from the river to the sea” would require killing all the Israelis.

I stand with Zion… Forever.

The children that do this are the pawns of evil.

May G_d have mercy on them for they know not what they do.

Others have put them up to this and it leads to the very steps of the White House.

Thanks you for making this presentation and continuing the good fight. God Bless.

I tend to think underwear first (BVD) when I hear BDS because when worn by whinny liberal babies throwing a fit, it is bound to be full of stinky crap coming out of their potty mouths.

The Left’s success against South Africa in the waning years of apartheid – and frankly the success they’ve had in demonizing Israel in Europe – has encouraged their “guerrilla street tactics” in this effort.

One major difference is they had a clear moral case for persuasion against the South African government, while currently Arabs enjoy far greater freedoms and human rights in Israel than in any Arab or muslim-run country.

Professor Jacobson, I am pleased and relieved that your presentation was well received and without interruption, which is becoming more frequent on college campus venues. I know you may not want to comment about security for the event, but I’m curious as to how you were able to have this talk without interruption, especially since there was advance notice. (This should be a model for speakers on campus as well.)

Looking forward to watching when I have a day off … whenever that might be.