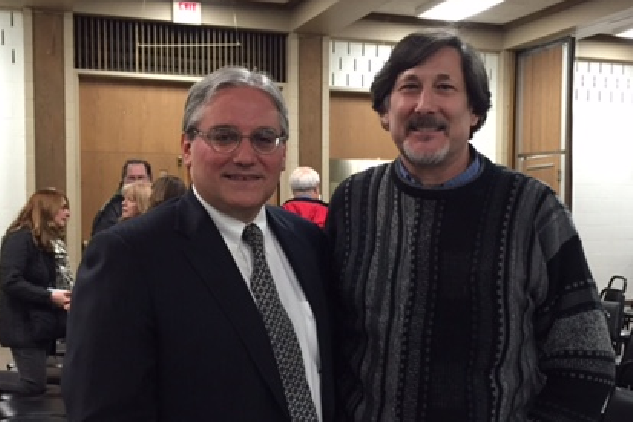 Had a good speech last night at the Jewish Community Center in Rochester (NY) on the topic of Boycotting Israel: The insidious threat of the BDS movement.

As previously mentioned, the speech was sponsored by Roc4Israel.

Including the suspicious looking character standing next to me in the Featured Image.

There were several other readers in the audience. Meeting readers at events is one of my favorite parts of public appearances.

What was Philly Guy doing in Rochester? It’s a long story, and if I told you I’d have to, well, you know.

BDS, Look Who I Found

Let me guess. Philly Guy was there to get out of the way of the blizzard of the century thinking a heated discussion could keep him from freezing to death from the consequences of global warming. 😉

What was Philly Guy doing in Rochester? It’s a long story, and if I told you I’d have to, well, you know.

Excellent talk. A subject everyone needs to hear about. We had a large audience and the Professor had their complete attention. I am fairly certain the crowd had never seen this blog which made it more impressive.

My thanks to Professor Jacobson and his lovely wife for being gracious with their time. PhillyGuy is now RochGuy – family commitments being what they are.

Great event. Very informative. A talk by him is a definite must-see. Not surprisingly, he is exactly what you expect him to be. He and his wife honestly and genuinely appreciate everyone that reads the blog. While they don’t always respond, they read your comments and remember who you are.

Relax, Ragspierre. You’re an American; of course you’re a victim!

Rags you are too memorable. Of course they know who you are!

lol so you also blame Henry?
thought I was only one 🙂

Hey…Antichrist… What more needs be said?

Good thing my comments are anonymous, except for the few ‘good’ ones.

Funny, I saw Rags’ and Hawkin’s avatars at my local shooting range. A lot of people were using them for targets.

…but ever round pierces my tender heart.

Let your “tender heart” rest easy Rags. You and Henry are the good guys! But I do like to tease yous guys cuz that’s what I did to my two brothers while I was growing up.

And, I still haven’t grown up yet so it is a good thing that I remain ‘anonymous’ :)for now in my comments. Anyway, that’s my excuse to cover a multitude of ‘badly’ worded comments and the lack of good editing on my part.

Sad to say, though, the little Nero “Thumbs Down” guy is still lurking out there Rags, waiting for you to comment on anything.

As for targets I pretend my target at the gun range is the ‘beheading guy’ over in ISIS land. You know the guy. He’s the one who needs a few millimeters of pointed reminder that the Day of Judgment is coming.

Awesome Prof! I always enjoy meeting fellow bloggers. Hope it was a happy event for you both. 🙂

I hope all y’all will give us a heads-up if/when you make it down my way! We have guns, grits and fresh key lime pie; what more could you ask for??