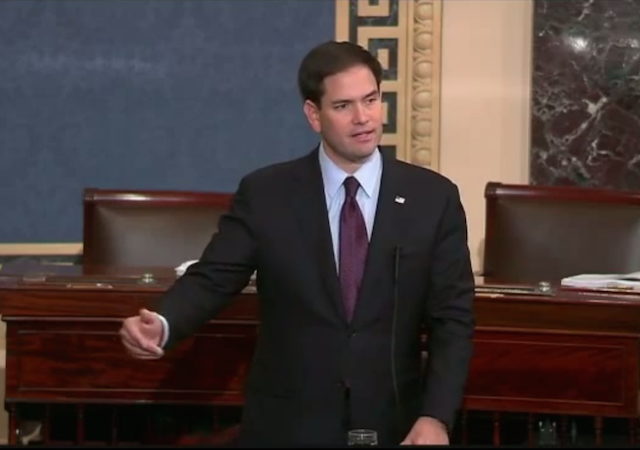 The past few days may have been chock full of more strategy-derailing posturing and political theatre than we wanted or deserved, but hidden between the folds of intra-party fighting was a nugget of relevancy that we should dust off when we resume debates over who deserves to serve as our next post-cycle whipping boy Presidential candidate.

Senator Marco Rubio (F-FL) took to the Senate floor for a palate cleanser on foreign policy, and it was impressive. The video below is 43 minutes long, but hit play and let it serve as background sound for your Sunday afternoon internet binge:

Paul, a critic of recent Republican and Democratic foreign policy, argued that inserting language in the AUMF that would limit the fight to Iraq and Syria would keep the effort from involving the nation in “a worldwide war.”

He was also critical of the AUMF applying to “associated forces.” Paul cited a group called Terrorism Research and Analysis Consortium that lists 60 jihadist groups that are allied with ISIS in 30 different countries.

“There is a tendency for executives from both parties to abuse this wording and to make it mean anything they want,” Paul said, adding that the authorization is too open-ended with out a geographic limit.

Paul said that if ISIS moves beyond the limit, Congress can revisit the issue and vote to broaden the fight.

Rubio said the amendment would be too limiting because he believes ISIS could quickly redeploy itself to another location, such as parts of Libya where they are entrenched.

Rubio and Paul aren’t the only ones bolstering their international cred for the upcoming cycle—Texas Governor Rick Perry has also spent a lot of time working with past Administration officials to give his foreign policy chops more gravitas amongst the growing sea of contenders. I want to see more debates and speeches like this because, especially now, it’s important that the Republican nominee demonstrate not only an understanding of America’s place in the world, but of the world’s place in America.

Progressives are pushing for a more “international” (read: less American) America, but we need a leader who values an international perspective within the context of our Constitutional republic. Strategic depth in both domestic and foreign policy is going to be important for candidates in 2016 not only because of rising conflicts in the Middle East, Africa, and Eastern Europe, but because President Obama has done otherwise irreparable damage to America’s reputation as a global leader.

Foreign policy may not be a #1 priority of voters, but it should be a priority for candidates whose goal is to actually be successful if they do eventually make it to the Oval Office.

Rubio campaigned and was elected as a Republican on his stand against Amnesty. He promptly collaborated with the worst of the Democrats to try to force through Ammesty and Permanent Open Borders.

He is a perfect fit for the Institutional Republicans who just campaigned against Amnesty, and to resist Obamacare; and after a wave election that put them in power just fully funded both AND accepted Obama’s power to rule by decree.

So Rubio may well be a possible candidate for the Republican nomination for president. If the Republican Party still exists by 2016, which is not a certainty.

If the Republican establishment wants Rubio, it can have him.

Conservatives have seen what Rubio is, and we don’t want him.

Of course the Republican establishment wants Rubio, he is one of them

I used to support him. He’s my senator. But not any more – he’s a sellout.

Shortly after the election of new conservative hope, he stood at a podium with Chuck Schumer. A bi-partisan immigration bill, hurray.

Goodbye Rubio, you are dead to me.

He didn’t merely sell out to the left — he was dumb enough to be used by them.

Rubio is a minor player in the RINO GOP. But look for him to be bolstered by the RINOs and the democRats: they don’t want to lose their investment in this useful idiot.

I see Legal Insurrection commenters are much smarter than author Amy Miller who continues be put out GOP Establishment propaganda. Marco Rubio has long since been history. Ms. Miller’s guy Rick Perry hired Henry Barbour as an advisor to his upcoming pres. campaign AFTER Barbour ran the 2014 Mississippi GOP primary calling conservative Republicans racist, recruited black democrats to vote in the GOP primary runoff by telling them the conservative Republican candidate would try to prevent blacks from voting, etc. Barbour’s GOP Establishment Miss. campaign received $750,000 in donations from billionaire NY liberal democrats including former Mayor Bloomberg. In addition to Barbour, Rick Perry has hired the acid, hateful, ultra GOP E crony Steve Schmidt as an advisor. These two men are cancer. Anyone who hires them is the same.

Rubio is dead to me after the bald-faced turncoat action of backing amnesty after running against it. Anyone who can give the finger to the people who put him in office needs to go down. He’s pure liberal in one regard – you had to elect this senator in order to find out what his positions were, just like you had to pass a bill to see what’s in it.