Rebuilding his national public persona after 2012. 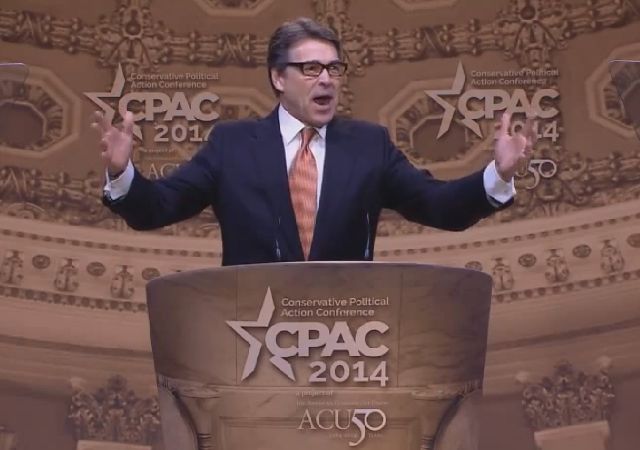 Texas Democrats weren’t happy when Governor Rick Perry headed overseas in spite of the first diagnosed cases of Ebola in the U.S. appearing in Texas.

While this might have served as a valuable distraction from Wendy Davis’s falling poll numbers, Perry’s decision to maintain his international schedule is shaping up to put him ahead of the growing pack of candidates expected to seek the Republican presidential nomination.

Even David Frum at The Atlantic has been forced to admit that Perry is building momentum both for his own campaign, and for America’s foundering international reputation. In his article, Frum compares Perry’s speeches overseas with those given during Obama’s now-infamous “apology tour”—and emphasizes the crucial difference between the two statesmen:

Like Obama, Perry acknowledged faults and flaws in American democracy and European history. But he seemed to have Obama’s ‘fault on both sides’ argument very much in mind when he countered with these words: “The shortcomings of Western democracies, the systematic savagery of the enemy—to a certain way of thinking, it all gets mixed up as one: ‘They’ve got bad guys over there, we’ve got a few of our own—what’s the difference?’”

Perry’s London speech focused on the threat from ISIS and the Middle East. In Warsaw, he would have spoken about another—nearer—challenge: from Vladimir Putin and a revanchist Russia. In his prepared, undelivered remarks, Perry paid due tribute to the fact that it is the president, not governors—not even Texas governors—who make America’s foreign policy.
…
The list of Republican candidates for 2016 is long. Still, a Texas governor always belongs near the top of that list given the state’s lode of electoral votes and deep-pocketed donors.

Conventional knowledge tells us that foreign policy is traditionally not the platform plank that gets voters to the polls; but that’s not to say that Perry can’t use the current crisis to his advantage.

Rick Perry recently called for a controversial travel ban from west Africa; while some politicians have focused on attacking the Obama Administration for mishandling the crisis, however, Perry’s travels have allowed him to discuss the issue outside of the domestic policy echo chamber.

This is an important distinction, and one that Perry needs to exploit if he wants to force America to forget his disastrous 2012 presidential run.

Contrary to the popular wisdom of the moment, Rick Perry did not bring Ebola to our shores. The fact that Perry attempted to keep Texas calm after the first case was diagnosed does not mean that he was ignoring reality; nor does his decision to travel overseas.

Anyone can stand in front of a camera and blame Obama or the border crisis or the CDC for Ebola; but the key to building momentum with foreign policy is twofold: practical experience, and the ability to work toward solutions.

With the country becoming increasingly nervous about the affect events overseas can have on our shoes, any effort by a politician to reach beyond the echo chamber is going to gain the attention of voters.

If Perry can begin to build his momentum on what is without a doubt the most difficult policy area for candidates to navigate, he’ll already be ahead of the game.

When are we going to hear about the prosecutor’s response to the motions seeking to dismiss the Rick Perry indictment? I thought the hearing on that was going to take place October 13th?

you could do a lot worse than Perry….in fact, currently……

* Technically, Reagan won on his third try, but the 1968 effort wasn’t a serious campaign but more a demonstration by the conservative wing that we hadn’t gone away.

Perry has a strong record upon which to run. And his conservative credentials are strong as well.

He may not please the Purity Police, but then, who does?

Perry unfortunately ran such a clumsy campaign in 2012 I think it has poisoned any future chances. Too bad because he has a record of job creation to be proud of but I also think that W. has turned people off from presidential candidates from Texas and that includes St. Ted of the Cross as well.

If there was ever a line of work that allows for do-overs and re-invention, it’s politics.

Perry’s not perfect, but he’s smart and he’s a tried-and-true, red-blooded American. He knows how to govern. He’s also attractive, which shouldn’t be but unfortunately is a factor in politics today. He can still turn a girl’s head. Hillary looks awful and the ol’ horndog Bubba just looks old.

Perry’s foreign travel and a better set of handlers should improve his overall presentation. His creds are pretty good. As long as he stands up to the media, he’ll probably do pretty well and he’ll have my vote in the primary.

As long as it’s not McCain or Romney again; please, Lord.

With the beheadings, Ebola, Prez. Pestilence giving Iraq back to terrorists, the border, the coddling of Iran, and Putin’s adventures, foreign policy is likely a considerably larger factor in this election than it usually is. Even a few of the unwashed parasites care about the border and Ebola.

Perry has carried TX to the fastest and best job-growing state in the country, understands immigration and, in contrast to what’s been shoved down the people’s throat for the last six years, is refreshingly American; flaws, boots, twang and all.