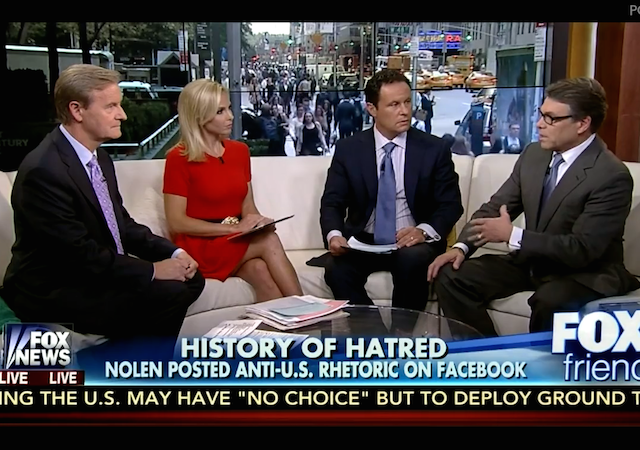 Rick Perry hasn’t let a criminal indictment stop him from taking serious steps down the road that leads to November 2016. In addition to traveling to key primary states, he’s been beefing up his foreign policy credibility and increasing his presence in the media.

He recently appeared on an episode of “Fox and Friends” to talk about the connection between the recent beheading of an Oklahoma woman, and U.S. action in the Middle East:

“At some point in time, the administration does have to address this as what is appears to many people that it is — and that is an act of violence that is associated with terrorism,” Perry said on Fox News’ “Fox & Friends.”

“I think Americans are confused about what this is,” Perry said. “This is a clear case of an individual going in and doing something that does not meet their definition of ‘workplace violence,’ so I think any rational thinking American is going to look at this and go, ‘This is more than just normal workplace violence.’”

During the interview, Fox News’ Steve Doocy said that if the incident was not connected to the Islamic State of Iraq and the Levant, after the group had released its own beheading videos, then “it’s the craziest connection ever.”

Perry said the act “seems to fall into that type of activity” but said to “give the appropriate time to really do the investigation to make sure that this is in fact the case.”

It was an honor to speak with Dr. Kissinger today and hear his thoughts on America’s foreign policy challenges. pic.twitter.com/29TANxIEwQ

This is a good strategy for Perry, who is working his way up to “square one” with voters who weren’t impressed with his 2012 presidential run. At this point, Perry needs to pursue both a personal connection with all voters, and the credibility it will take to impress more sophisticated players.

Up until now, Perry’s presence in the foreign policy conversation has been mostly limited to discussions questioning how far a state is Constitutionally permitted to go to protect its own lands near the border. By taking steps to enter the conversation about what happened in Oklahoma, he can slowly build up his credibility to comment on Middle East policy; similarly, meeting with people like Kissinger will afford him the gravitas needed to expand his commentary to policy affecting other regions.

Foreign policy is usually a dark horse topic for presidential hopefuls; but with so much emphasis on ISIS, illegal immigration, and the risks that come with open borders, Perry is wise to get an early start on convincing the American people that he’s done his homework.

why is anyone talking to Kissinger. he is anti-israel and one of the early promoters of the new world order.

….and why is Perry talking about boots on the ground. that is stupid. arm the Kurds and step back and watch.

Kissinger is right on Russia/Ukraine. He wanted to negotiate non-aligned unified Ukraine early on. Ukraine would have been spared civil war, and US would assure Russia’s accommodation in the Middle East. Yes, I realize that Putin is authoritarian.

There are those who would arm a foreign force, train a foreign force or pay mercinaries. This nation has both the need and the means to use our own fighting force. For one thing, we can get the job done poste haste. Since we are not trying to start a government, but to defeat an enemy which threatens America in their intent. A 50,000 man force of U.S. Marines with air power would quickly and efficiently end the problem. Go in, kill the enemy, break things and leave.

To rely on the Kurds will leave the U.S. open to greater attack should they fail.

arming the Kurds is a decent start.

ISIS is a muslim brotherhood offshoot that obama/huma/clinton armed and trained. they will only do limited damage (and only because of domestic optics) to them since they are their people.

the Kurds need to stop ISIS and are motivated to. I do not trust the administration in washington to work in the interest of Americans. with the present commander and chief all you will get is dead American soldiers and ISIS will not be destroyed.

I have no doubt that the American troops could defeat ISIS just that the obama administration will not allow then to so why advocate sending them?

I’ll be happy to give Perry another look for 2016.

At this point, Henry, I would be willing to give Perry’s horse another look.