A citizen journalist scoops the media on Obamacare. 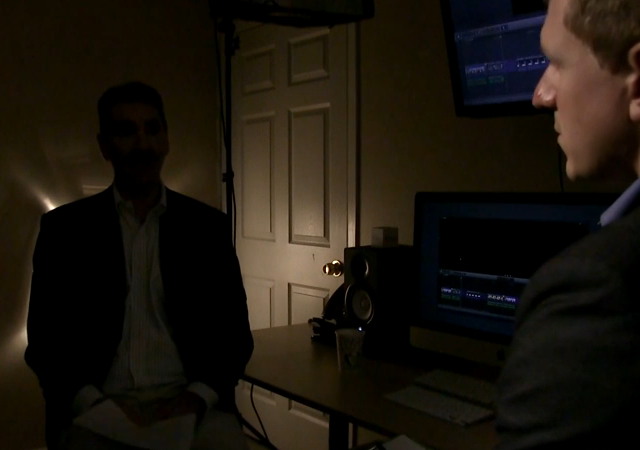 In case you’re not aware, the damning videos of MIT economist Jonathan Gruber, which confirmed the worst fears of every single critic of Obamacare, weren’t uncovered by a journalist.

The entire American media complex was scooped by a regular guy who started looking into the way the law was passed after losing his healthcare plan.

James O’Keefe of Project Veritas recently sat down with the man only identified as “Rich” for an enlightening interview, in which he explains why he released the videos:

Project Veritas is releasing a video interview of the man who recently brought videos of MIT economist and Obamacare architect Jonathan Gruber to public attention. Award-winning journalist and best-selling author James O’Keefe conducted the interview, which is being distributed on YouTube.

During the interview, “Rich” stated that there was intentional mislabeling in the Affordable Care Act in order to hide a secret agenda in the bill: A two-hundred-and-fifty billion dollar per year tax grab.

“President Obama promised us the most transparent administration in history,” said Project Veritas President James O’Keefe. “Rich has opened a new debate about an effect of the Affordable Care Act which will impact over one hundred and fifty million Americans. We deserve to know if part of the Obamacare plan was intended to eliminate the two hundred and fifty billion dollar yearly tax break. If this is the case, we also deserve to why this information was kept from the public by the White House.”

All is not lost for Gruber. In fact, one person thinks he deserves an award.

Jonathan Gruber, the arrogant, profiteering liar of the year

Jonathan Gruber should have been Time’s Person of the Year. The magazine gave it to the “Ebola Fighters” instead. Good for them; they’re doing God’s work. Still, Gruber would’ve been better.

Time’s Person of the Year designation has lost a lot of its stature. Part of its decline can probably be attributed to the fact that it’s come to be seen as an honorific.

It was originally conceived to recognize the person who, “for better or for worse . . . has done the most to influence the events of the year.”

In 2001, however, the editors couldn’t bring themselves to bestow the title on Osama bin Laden, even though he certainly deserved it. (Mayor Rudy Giuliani got it instead for his heroic response to the evil deeds of the person who influenced the events of the year most decidedly for the worse.)

Isn’t it Rich,
Aren’t they a pair,
O’Keefe at last on the ground,
Letting this air,
Show us the Clowns …

This whole obamacare fiasco is likely the most unAmerican event in History.
911? That was done by our enemies. It was horrible, but you can expect your enemies to attack you. That’s why you call them enemies.
Obama, Pelosi, Gruber and the like, on the other hand, these are people that called themselves our leaders, our friends, but they conspired and lied to screw us all. That’s called treason.
And all those who voted for the law without reading it, that’s called treason by stupidity.

Add Boehner and McConnell and every republican who voted them back into leadership in the House and Senate to your list of “…our leaders, our friends, but they conspired and lied to screw us all.”

I beg the conservative leaders to have a secret meeting and draw straws among themselves to pick nominees for president and vice president and they and the rest of us can fight for them. We all know who ever is picked will have the full weight and vicious fighting power of the republican/democrat establishment against them – Please figure that out and decide to put personal ambitions aside and attempt save the Republic.

Of course!
I just mention the three (IMHO) more prominently despicable faces. But all those who voted for it, or failed to oppose it, or in any way helped pass that thing, they all share the blame.

And by the way, “Rich” prefers to hide his face.

That alone tells you a lot about the current state of affairs in America. This used to be The Nation where citizens did not fear to criticize the government.

More accurately, Rich didn’t release the videos. They were already released, that’s how he found them on YouTube. I would suggest Rich “packaged” them for our consumption. He did the job journalists wouldn’t do.

According to the Dems, isn’t that what Mexican immigrants are for? To do the jobs Americans don’t want to do?

Every Democrat lie exposed is covered with another lie. But going the other direction, uncovering the exposed lie (e.g. “you can keep your doctor/plan”) reveals broader devious intent to gradually categorize employer plans as highly taxed Cadillac plans (tax the rich).

So Obamacare rigs the market to, over time, destroy private plans, and replace with socialized medicine. As with the lauded and mislabeled “public option”, there is no real option, just a choice between being the subsidizer or the subsidized, as private plans are heavily taxed and slowly regulated to death by Dem bureaucrats.

Same basic assault on energy with CO2 malarky. Only the functional US is targeted to pay the world indulgences for the “sin” of (life giving) CO2, even as dysfunctional China belches unscrubbed coal pollution.

So BigGov hammers working class health care and cheap energy, but that is not enough. Democrats defraud American Liberty (choice) on every front. WASPy America and the founders of our constitution must be demonized, to pave the way for a UN collectivist nirvana. So we are told the lies of diversity and fairness, and of “racist and rapist America”. Told American aggression is what’s wrong in the world.

We won in Vietnam, then 1974 Democrats DEFUNDED our support for resupply, so a half million allies are murdered off. The region goes communist, Hanoi Jane finally wins. Defunding Worked when Ford was president.

The war on local cops is giving feds more control over them too … war on guns, war on white men, war on capitalism, war on Christmas, etc., led by lawless rebel Obama and an activist attorney general.

Obama and Democrat statist goals are becoming clearer. So we win a wave election and who are McConnell and Boehner fighting against most? The Tea Party … of course.