Gruber on Obamacare in 2010: “Full disclaimer, I helped write it”

Gruber on Obamacare in 2010: “Full disclaimer, I helped write it” 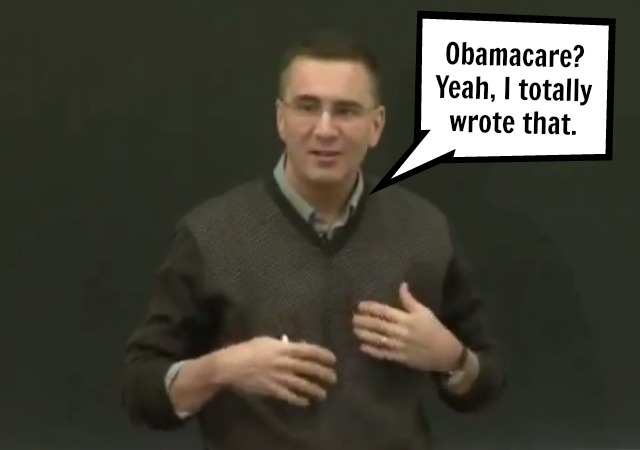 And here we have yet another Gruber video.

Tuesday, Jonathan Gruber voluntarily testified before the House Oversight Committee where he was grilled by committee members from both sides of the aisle.

Gruber apologized for his, “glib, thoughtless, and sometimes downright insulting comments.” Gruber took great pains to sidestep any question that touched upon the veracity of his remarks. Repeatedly, he claimed he was not a political advisor or a politician:

Exhibit A: “I made uninformed and glib comments about the political process behind health care reform. I am not an expert on politics and my tone implied that I was, which is wrong.”

Exhibit B: “I am not an elected official, nor am I a political advisor. I am an economist who ran a complex microsimulation model to help Democratic and Republican politicians and their advisors understand the impact that their policies would have on the health care system.”

Exhibit C: “I’m here to explain that a number of those comments were made in a tone of expertise that I don’t have.”

Exhibit D: ” I was an economic modeler, one of about sixty contractors.”

You get the point.

You’re hearing a lot of discussion about the Patient Protection Affordable Care Act which passed last March 23rd. This was the single most important piece of government legislation perhaps since World War II. Certainly the most significant piece of social policy legislation since Medicare was introduced in 1965. What does this bill do? Well this bill tries to, and let me… full disclaimer, I’m going to describe objectively, but I helped write it. So I’m going to be objective, I’ll try to be objective, but full disclaimer, I was involved in writing the legislation, so, there is some bias involved here.

So which is it? Was Gruber a lowly, nameless contractor in a sea of many or was he, as so many claim, one of the most influential architects of Obamacare? Gruber seems to speak for himself on the matter, provided he’s not under oath in a Congressional hearing.

“You didn’t build that.”

“Was Gruber a lowly, nameless contractor in a sea of many or was he, as so many claim, one of the most influential architects of Obamacare?”

That isn’t an unsolvable mystery.

How many times was he at the White House, and with WHO?

How many times was he with Pelosi, and who else was there?

How many times was he in direct contact with the staffers for the Deemocrat/Collective?

What portions of that stinking mess can be identified as his?

How many times do the movers and shakers mention him by name, and in what capacity?

The sweetest are those who lauded him and mentioned how central this ‘MIT economist’ was to writing the bill at the time but who now never even heard of the guy.

I view Gruber as an unwitting whistleblower. We need more civil servants and contractors to speak plainly, so that the people and circumstances can be judged in their full, unvarnished, unprompted audacity.

Has anyone lived long enough to learn the 2nd rule? :O

The 2nd Rule is violation of the 1st Rule results in termination*.

*A word with multiple interpretations.

This guy reminds me of this scene from Die Hard.

Harry Ellis: I hope I’m not interrupting anything.
Hans Gruber: What does he want?
Harry Ellis: It’s not what I want, it’s what I can give you.
[Comes in]
Harry Ellis: Well, I’ve watched 60 Minutes, and I’m saying to myself, they’re motivated, they’re happening, I.E. they want something. Maybe it’s because you’re pissed off or maybe it’s the jockies, it’s none of my business.
Hans Gruber: Very good, you’ve figured it out already.
Harry Ellis: Hey, business is business. You use a gun, I use a fountain pen what’s the difference? Let’s put it in my terms, you’re in a hostile takeover, you snatch us up for some green mail, but you’re not expecting some poison pill to be running around the building, am I right? Hans, *booby* I’m your white knight.
Hans Gruber: [Looking puzzled] I must have missed 60 Minutes. What are you saying?
Harry Ellis: You know that guy that’s fucking things up upstairs,
[sits down]
Harry Ellis: *I* can give him to you.
[Grins]

Can we nickname Gruber ‘booby’? =)

Hmmm … Hans Gruber–Jonathan Gruber? Nah, just a coincidence … although, they were both ripping off millions from the public. Hmmm …

Gruber reminds me of that movie plot line where the gang of robbers (Obama/Dem congress) has divvied up the cash they’ve stolen (Obamacare), and the gang leader (Obama) warns everyone to STFU, sit on the money, say nothing, do nothing to attract attention to yourself. Lay LOW (transparency). But there’s always that one guy who can’t do it, can’t shut up, can’t it on th money. Within days he’s out there buying new cars, new clothes, he’s wearing pounds of bling, a glittered fedora, and red leather pants, and he’s flapping his gums like a camel caught in a hurricane about what a bad-ass success he is.

Gruber is that guy.

Actually Henry, I would have more respect for Gruber if he had gone into a bank and robbed it for $6 million. At least he would have had to face the possibility of things going south on the deal and getting shot by the police or getting caught and going to prison.

This jerk ripped everyone off in a no risk (other than an uncomfortable day being questioned in front of TV cameras that few watched and fewer reported on) caper.

Gowdy should call him back to the witness stand and continue to grill him under oath. Get the SOB for perjury.