“He had an infectious smile” 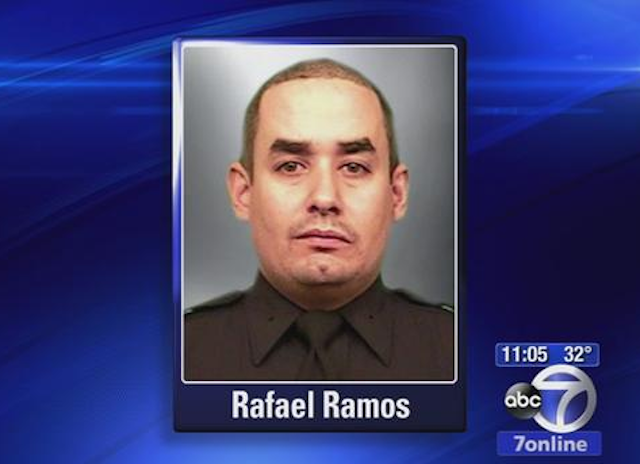 UPDATE: You can watch the funeral here.

Today, New York City will lay to rest Officer Rafael Ramos, one of the victims of last week’s brutal assassination that took the lives of Ramos and his partner, Officer Wenjian Liu. More than 20,000 officers from all over the country, along with Vice President Joe Biden, are expected to attend.

Yesterday’s wake drew thousands of people, some of whom waited hours outside the church to honor Ramos’ life and sacrifice:

Throughout the day, mourners from all corners of New York City — friends and strangers alike — came to pay their respects to “a humble man” willing to help in any capacity, as a statement posted on the Christ Tabernacle website described him.

“He had an infectious smile,” said the Rev. Ralph Castillo, one of the church’s 18 pastors. “When I think of Ralph [sic], I think of his smile and his consistency. He didn’t have to be there. This is something he chose to do. He was faithful and consistent.”

A group of about 15 mourners, some carrying a single white rose, had already lined up by the church’s entrance before noon, waiting to go in for the viewing, which began at 2 p.m. A giant Christmas wreath with festive ornaments decorated the front of the brick building.

“Today we weep with the Ramos family, the New York Police Department and the nation as we mourn the loss of our dear brother,” Mr. Castillo said. “He was a gift to our church.”

Outside of the church, however, tensions ran high, with protesters showing support for the family while calling for the resignation of New York City Mayor Bill di Blasio. Officers who attended took measures to protect themselves from the threat of violence.

Neighbors milled around the church. Friends who lived five blocks away, Delia Ramos, 73, and Sal Conti, 72, said they had come even though they feared the event could turn violent. “We just had breakfast at the diner and the officers there all had bulletproof vests,” Mr. Conti said. “They can’t even relax. They have to worry somebody will shoot them. It’s a shame.”

Ms. Ramos said: “I hope that things get better between the community and the police. All this animosity is a horror.”

We’ll be providing updates and coverage today of Officer Ramos’ service via this post. Services for Officer Liu will commence as soon as his family from China can make arrangements to arrive in the States.

You can read Rafael’s obituary and leave a message for the family here.

Officer Ramos and Officer Liu were posthumously promoted to Detective First Grade. I am not sure if this is done very often, but I hope that it helps their families.