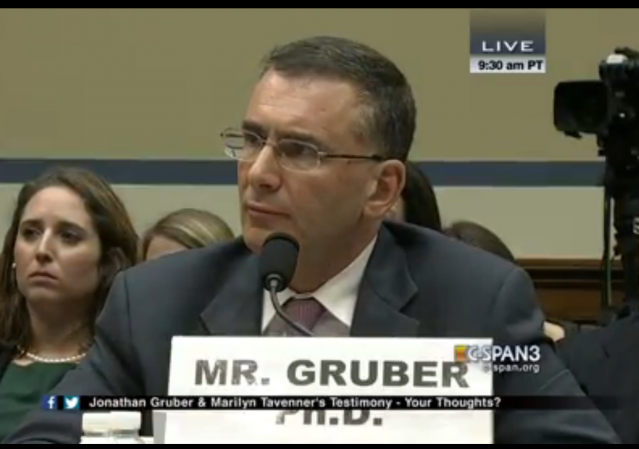 Obamacare architect Jonathan Gruber, voluntarily testified before the House Oversight Committee today. Made famous when his comments about Obamacare were unearthed in all their truthful glory, Gruber took great pains to sidestep any question that touched upon the veracity of his remarks.

Gruber’s defense amounted to, “I’m not a politician, and I was using inexcusable language to make myself sound smarter than I really am.” For not being a politician, Gruber masterfully avoided answering questions.

Despite getting paid almost six million bucks from the federal government and advising the Obama Administration on the construction of the Affordable Care Act, Gruber claimed repeatedly that he was not a political advisor.

Oh and look at his white gloves……..

FYI, do you think this would apply to Gowdy too?

How pathetic are you when your best course is lying that you were being a prick as your best defense?

Gruber sounds and acts like a contrite Pee-wee Herman.

To prove my point, this 23-second video is the best example of Gruber being contrite.

To no one’s surprise here, the title of your article says it MUCH better than The Boston Globe: “MIT professor apologizes for health care law remarks”

Seems like there ought to be a good case for fraud against Gruber based on his statements today….. Wisconsin’s Scott Walker would have standing.

Lummis really tore into Gruber – even better than Gowdy; and she reamed Tavner with the “real world consequences of the debacle”.

I’m spending way too much time watching this hearing today, but it’s been worth it.

What’s the significance of “Mr. Gruber PhD” as opposed to Dr. Gruber?

Doctor Gruber is fairly straightforward. PhD is interchangeable, meaning either Doctor or Piled Higher and Deeper.

It has something to do with the use of Honorific titles during Congressional hearings. I can’t find the reference as to how it’s handled off-hand, but I seem to remember Congressional policy was that everybody testifying was supposed to be Mr. or Ms./Mrs. UNLESS they were an appointed or elected office or Commissioned (then, it was Hon. [name] followed by their title or their military Rank, such as Gen.).

I like watching this, I like seeing smarmy leftist crap=weasels squirm. That’s fun. But at the end of the day, what’s it really going to matter? The R leadership will NEVER repeal this monstrosity. It ends up being theater, nothing more.

Hopefully SCOTUS will nut up in Halbig, but I rather doubt it.

How do you treat a person who has been severely wounded by shrapnel?

My grandfather had pieces of it come to the surface of his face just months before he died. Our insurance system is complex and sprawling. I hope Obamacare is disassembled with care and better economic wisdom that was used to enact it.

It is clear that Gruber has been told by his Attorney to say a certain set of words or phrases, as it is repeated numerous times throughout. What a minion.

MIT students: you can delay your exams to deal with Gruber.

Gruber about his comments: “I don’t remember making them.”

What can we expect next? A claim that he sustained a blow to the head which caused amnesia. Or maybe a gluten allergy that causes him to act pompous and lie?

Aneurism. The biological equivalent of a “irrecoverably crashed hard drive”.

Jail him for contempt; pull him out once a week to see if he’s ready to be truthful and put him back if he’s not.

The GOP (Gowdy notwithstanding) doesn’t have the cojones for that.

If they did, Eric Holder – having been found in “contempt of Congress” – would’ve been behind bars long ago.

He’s still a lying stooge and he failed to totally own up to what he had done. He conspired to deceive the American public to push through an unconstitutional bill so that the gov could achieve a power grab. This wasn’t ever about lowering costs or making insurance more affordable. One doesn’t have to lie about the benefits of good policies. The ACA stinks and it had to be sold with lies, deception and manipulation. I hope his arrogance costs him as much grief as he has caused the American public because he deserves it.

There are SO many trash talking academics who NEED the Gowdy treatment.

Gowdy is utterly superb, can he next turn his attention to the UN and UNWRA reform? What about all those Middle Eastern Studies departments who receive federal money and then support the BDS movement? I’d love to see Trey Gowdy asking them “What do you mean when you say ‘from the river to the sea’?”

This guy was media trained to within an inch of his life. He dutifully memorized certain apologetic phrases as a substitute for taking the fifth, or licking boots, or something. “Once again, I was using glib, thoughtless and totally inappropriate language…trying to seem smarter than I really am….” Then the Hillary defense, “I don’t recall….”

Gowdy did a great job; and Darrell Issa had a wonderful rejoinder at the end, “I guess these comments were popular in that (…an intellectual community with lots of like minded people) community.”

I cannot imagine what it would be like to be charged as a criminal in a crime and have Trey Gowdy as the prosecuting attorney. I would imagine he would be a great Thanksgiving dinner guest. There would be absolutely no meat left on that bone, if he was given the carving knife.

I used to work court duty on occasion as a deputy. We had a prosecutor that was a lot like Trey Gowdy. It was a pleasure to watch him. On one occasion I remember he was questioning a lawyer accused of fraud (I know… hard to believe). By the time this lawyer got off the stand he was bleeding from everywhere except the soles of his feet. And the best part was he didn’t even know it.

It was amazing to watch a real professional dig out the truth from a witness that thought he was smarter than the prosecutor.

I recall him once saying he never lost a case he took to trial.

Rep. Massie was even better than Gowdy. I haven’t been able to find video of it but he used and abused Gruber. He pounded him over and over on ethics and even used the MIT ethics he signed against him too. It was heart warming!

as soon as I can will self host it but stuff on cspan pretty safe.

whole category here
http://www.theconservativevoices.com/media/cat/political/gruber/
finally got the Un of Rhode Island one (its been up and down on youtube and other places) up too and as long as I pay the bills it will stay up.

“Gruber gets Gowdy-ed”. I like the headline almost as much as watching Gowdy do what Gowdy does.

whelming………….i expect this show to accomplish almost as much the Congressional shows on…fast ‘n furious….Benghazi…..VA and IRS scandals.
How’d those work out?
Commycare? Ya, the klowns we sent to D.C. will get about the same satisfaction on that count.

The problem for Gruber is even Democrats had to trash him because “that’s not the way WE think”. The problem for conservatives is the media (those who will report it at all) will isolate Gruber as a loose cannon who does’t speak for the Democrat party or the President. The fact his audience was lapping up his rhetoric will be ignored.

So, in the end, after a few hours of embarrassment he goes home to the multi-million dollar home he bought for not helping Democrats write ACA.

Hell, I regularly embarrass myself for a lot less than that.

I signed in just to give you a thumbs up. You sum it up perfectly. (Oh, and so do I. For what he was paid, I think I’d be okay with abject humiliation.)

It takes a lot of steam out of watching these hearings for me to realize nothing is likely to come of it, that the bulldogging is for the TV cameras and the goal of looking tough on Obamacare is now already achieved.

Oh there was a hearing today in Washington?

Wow, I watched my local news and I saw this thing about a report on torture with pictures of torture chairs and waterboards and pictures of Bush and Cheney. Didn’t see a thing about Mr. Gruber.

Also they said that after Bush, President Obama banned these horrible interrogations. Obama is a humanitarian hero and Bush and Cheney are evil.

The media and Senator Feinstein accomplished just what they intended.

He can’t recall – but he was clearly enjoying himself in several of those clips, relishing pulling the wool over the ‘stupid’ people’s eyes. A happy and arrogant celebration of himself.

Such are the ‘experts’ to whom the Left would turn over our entire economy.

Who here doesn’t want a Trey Gowdy T-shirt for Christmas?

poor little jonny g
he sounds like a whiny little worm who always got chosen last in the punchball games in grade school.
never got picked for the pick up b-ball games in middle school.
never could get a date in high school, etc.
but he did well with the teachers so he progressed through the ranks of academia, all the while harboring a hatred of those who he could not compete with physically or socially.
this led him to an animosity to the values which most value.
so here is his chance to get revenge on the prevailing values of the American people. He sounds like he had daddy issues as well, sounding like the little (fill in the blank) that he basically is

Ezra Klien. Adam Smith (Tucson Chick-Fil-A idiot). All brothers and they all look the same even.