Once upon a time, Hillary was against “an imperial presidency”

Once upon a time, Hillary was against “an imperial presidency”

That was then (Republican), this is now (Democrat) — keeping her options open if she gets the chance. 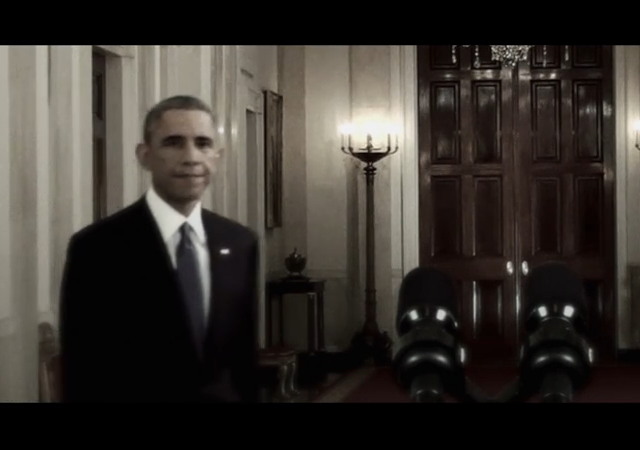 Wow. It’s not often that I can say it but this new video from the GOP is really powerful.

Whoever made this video deserves a promotion. The ad uses an audio track of Hillary Clinton criticizing George W. Bush’s so-called “imperial presidency.”

A new video released by the GOP on Friday calls out former Democratic presidential hopeful Hillary Clinton for her hypocrisy on the issue of executive action.

In 2008, Clinton said the George W. Bush administration was transforming the executive branch into an “imperial presidency.” In 2014, Clinton said she supported President Obama’s decision to grant citizenship to more than four million illegal immigrants.

Clinton unknowingly provided the narration for the GOP’s newest video.

“Unfortunately our current president does not seem to understand the basic character of the office he holds,” Clinton said of Bush in April 2008. “Rather than faithfully execute the laws, he has rewritten them through signing statements, ignored them through secret legal opinions, undermined them by elevating ideology over facts. Rather than defending the constitution, he has defied its principles and traditions.”

“This administration’s unbridled ambition to transform the executive into an imperial presidency in an attempt to strengthen the office has weakened our nation.”

But that was then.

Thanks to POTUS for taking action on immigration in the face of inaction. Now let’s turn to permanent bipartisan reform. #ImmigrationAction

On a related note, Fred Barnes of the Weekly Standard recently made an interesting comparison between Obamacare and Obama’s amnesty plan:

There’s a lesson from President Obama’s first term that he should have learned long ago. It’s simple: On an issue that affects many millions of Americans, it’s best—even necessary—to have bipartisan support in Congress. Going forward in a purely partisan fashion is bound to cause national discord, increase polarization, and heighten distrust in Washington. Worse still, it means the issue will be controversial for years to come.

The enduring unpopularity of Obamacare—indeed, the Republican commitment to repeal it—is an example of what can happen when bipartisanship is spurned. In this case, Obama and congressional Democrats made no effort to attract Republicans. They declined to compromise, offering Republicans zilch. They were mesmerized by their huge majorities in the Senate and House.

Now they own Obamacare, including all its troubles. Republicans own none. And the health care law lacks full legitimacy. Four years after it was enacted, Democrats are still suffering politically. For them, Obamacare is a drag.

The same is likely to occur with Obama’s executive amnesty for millions of illegal immigrants. It is doubly doomed to be regarded as illegitimate—first, because it stretches presidential authority beyond the breaking point, and second, because it has no bipartisan backing. Obama’s action is supported by many (but not all) Democrats in Congress but zero Republicans.

NO! It lacks ANY legitimacy. I has none. IT NEVER HAD ANY. It was all a pack of lies, predicted on a mountain of lies, sold by liars who lied. It was ILLEGALLY “passed” in to law. It was NEVER any part of legitimate.

And what are we to expect if Hitlery is elected POTUS? More of the same.

Slightly off topic. Just watched Ted Cruz school Chris Wallace on Fox on the use of a shutdown to keep the POTUS in line. Wallace used the Rino meme of “The shut down last damaged the Republicans”. Cruz shot back about the epic beating the Demonrats got in the last election … it was priceless, Wallace had the deer in the headlight look.

If Hillary Clinton is elected POTUS, I’ll volunteer to Be DOGCATCHERUS.

That corrupt, incompetent old hack stands about as much chance of being elected president as Bill Cosby has of replacing Bill Clinton as ‘father of the year.’

LOL to a “Cube” brother umm er Comrade I mean.

He kind of looks like Abraham Lincoln in that video.. it’s chilling.

He’s ticked off a lot of people. It’s likely to be, Secure the border, Deport only for several years, then allow an increase in work visas.

There are dozens of similar videos which could be made on a range of subjects to similar effect. Let’s hope they do.

Somebody needs to call Clinton out to defend her position. Bush was bad. Obama is worse. And he had over 20 videos saying he did not have the authority to do what he just did.

What is all this crap all the time about these ‘signing statements’ ???

Correct me if I’m wrong, but as I understand it, they DO NOT alter the bill in question one tiny little bit !

He can say ‘yadda yadda blase blase’ all he wants in a signing statement, it carries ZERO legal weight in court ! Right ? None !

He can either sign the thing or not, he can not alter it it !!! At least, not in that way ( executive orders being a whole different set of critters)

That is actually a pretty good primer on the issue.

The law means nothing to this malignant brat.

That the law means nothing to this malignant, unhinged brat means little to the malignant cowards hogging leadership positions of the GOP.

If Congress is the ‘police’ of the president, Boehner and McConnell are hiding out in a donut shop somewhere.

“If Congress is the ‘police’ of the president, Boehner and McConnell are hiding out in a donut shop somewhere.”