House hires Turley as lead counsel in suit against Obama

House hires Turley as lead counsel in suit against Obama

“Unilateral, unchecked Executive action is precisely the danger that the Framers sought to avoid in our constitutional system” 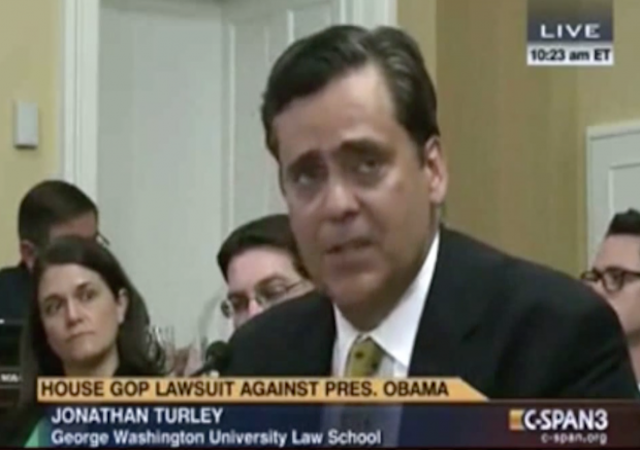 News recently broke that George Washington University constitutional law professor Jonathan Turley has been tapped as lead counsel by the U.S. House of Representatives in their lawsuit against President Obama.

Turley has been on the national legal scene for a number of years, but has been gaining increasing notoriety of late as a result of his Congressional testimonies and media appearances regarding the consolidation of constitutional authority in the Executive Branch.

Conservatives have been quick to praise Turley, as his criticisms of the Executive have been directed toward President Obama for the last six years. Turley, however, makes no representation that he is any way politically conservative. Indeed, in his blog post yesterday, he declared quite the opposite.

As many on this blog know, I support national health care and voted for President Obama in his first presidential campaign. However, as I have often stressed before Congress, in the Madisonian system it is as important how you do something as what you do. And, the Executive is barred from usurping the Legislative Branch’s Article I powers, no matter how politically attractive or expedient it is to do so. Unilateral, unchecked Executive action is precisely the danger that the Framers sought to avoid in our constitutional system.

For Turley, this is not an issue of one party against the other. Rather, this is matter of constitutional process. Despite the fact that the decision to sue the President passed along party lines, there are genuine non-partisan concerns about the dangerous evolution of the Legislative-Executive dynamic over the last few decades. Turley went on to add,

This case represents a long-overdue effort by Congress to resolve fundamental Separation of Powers issues. In that sense, it has more to do with constitutional law than health care law. Without judicial review of unconstitutional actions by the Executive, the trend toward a dominant presidential model of government will continue in this country in direct conflict with the original design and guarantees of our Constitution. Our constitutional system as a whole (as well as our political system) would benefit greatly by courts reinforcing the lines of separation between the respective branches.

Turley is, in my opinion, a great choice by House Republicans.

Although opponents are already trying to frame this choice as one of desperation from a Congress that was already abandoned by two other lead attorneys, Turley’s own comments paint a different picture.

After I testified earlier on this lawsuit, I was asked by some House Members and reporters if I would represent the House and I stated that I could not. That position had nothing to do with the merits of such a lawsuit. At that time, in addition to my other litigation obligations, I had a national security case going to trial and another trial case in Utah. Recently, we prevailed in both of those cases. Subsequently, the House General Counsel’s Office contacted me about potentially representing House. With the two recent successes, I was able to take on the representation.

Turley’s comments regarding his own schedule notwithstanding, a spokesman for Rep. Nancy Pelosi did not waste time attempting to undermine the choice.

“Even for $500-per-hour in taxpayer dollars, Speaker Boehner has had to scour Washington to find a lawyer willing to file this meritless lawsuit against the president,” said Drew Hammill, spokesman for Representative Nancy Pelosi, the House Democratic leader. “Now, he’s hired a TV personality for this latest episode of his distraction and dysfunction.”

Rest assured, this case is far from meritless. It will be interesting to follow Turley and the House of Representatives in this crucial, though uphill, effort to regain some of Congress’ constitutional authority.

We will be covering it here, step by step.

Since Turley is not from conservative ranks and is every inch the Constitutional lawyer, I do believe that Turley is the right choice for this action.

I hope the GOP didn’t pick Turley solely because he’s not from Conservative ranks. There’s always something to criticize, in this instance for Turley being a TV personality.

Why do Republicans try to hide who they are?

He’s a giant in his field and he wins cases. No point quibbling. He’s a good lawyer before anything else.

The battle of the two “Jonathans”. One who champions to uphold the Constitution and the other key to assisting in it’s dismantling and it’s abuse.

SCOTUS with all that which will be before them in the balance of Obama’s term, will require their own self examination in order to rule to the content and intent of the Constitution if they are to be able to stand as intended beyond the pale of politics.

Unlike Obongo, our Constitutional Law professor didn’t have to stay at a Holiday Inn Express in order to get his expertise–he did it the old fashioned way–he studied!

Bryan, in your legal opinion, will the Supreme Court be willing to decide the House’s case on the merits, or will it dodge the issue by saying that it is a political dispute, and that the House has a remedy (impeachment) if it believes the president has overstepped?

Those poor commie peter-puffers over at his site are having fits. That makes me happy.

Pelosi dissing Turley as “a TV personality”!!?? No shame left. None. This man’s more of a constitutional scholar than Obama will ever be.

Calling that prick a “constitutional scholar” is a sick prog joke. Anything that jackass ever learned about the document he has used to attempt to tear it down. I hope he rots in jail for what he has done.

There are probably some extant quotes or clips of Pelosi citing or praising Turley when he was defending Clinton from impeachment. Like Obama, Pelosi only ‘knows’ people as long as she needs or wants something from them; once she’s tapped them, it’s always, “Who?”

Mr.Turley is a hero and is about to find out what Democrats are really like.

My question is: What happens if Turley prevails?
Seriously.

Leftist liberals are first and foremost married, swear allegiance to, and are in all ways completely sold out to their sick, failed ideology.

Gruber lied. Then, when he thought no one could or would do anything about it, he let the cat out of the bag – he outted the con. Numerous times. And we would STILL not know about their lies and deceit – “evil” he called it – if it wasn’t for a citizen hurt by ObamaCare researching it!!

Obama lied. And he continues to lie – to our faces, with his own statements on video to prove he is full of it!

Pelosi, Reid – they both lied. And see nothing but their delusions while they continue to lie.

Clinton, Kerry, Schumer, Sanders, Durbin….the list is endless. Why would Turley be any different? Say it’s all good, spout the Constitution-supporting rhetoric, talk the talk. But in the meantime, he’s the rat in the cheese, the fox in the hen house, the wolf in sheep’s clothing.

I don’t trust him to be honest; rather, I believe he will assist in “fundamentally transforming” our nation, and make it look “oh! so legit!” because the courts say it’s so.

What’s a lawsuit going to do?

They won’t impeach because Clinton. They won’t defund because of the completely false RINO meme that government shutdowns are bad for the GOP (they’ve gained seats after every shutdown since 1995, and in a landslide this last time in 2014). Three truths emerge:

1. The Dems under Obama play only politics and couldn’t care less what the Constitution says to do.

2. The GOP, in its responses to Dem political chicanery, plays only politics and couldn’t care less what the Constitution says to do.

3. Despite the 2014 wave, nothing in Washington DC will change while the liberal Democrat Party is ‘opposed’ by the RINO GOP leadership.

Unless you are fairly certain you have 67 votes in the Senate, impeachment is a diversion and a waste of time. Better to allow the Supreme Court to rule on what the law is — that’s what it’s there for.

Stupidest strategy ever. If Boehner succeeds in forcing complete enforcement of Obamacare it will be called “Bonercare” henceforth and laid squarely at the doorstep of the GOP. The correct issue on which to sue Obama for his lawlessness is his refusal to enforce our immigration laws but Boehner did wan’t to do that because he also does not want our immigration laws enforced. Raging A-hole. Guy is the absolute WORST “leader” the GOP could possibly have.

Perry is talking about pursuing the correct lawsuit, against Obama’s refusal to enforce immigration law: