Begich Out in Alaska, Sullivan In

Begich Out in Alaska, Sullivan In

The road to +9 in the Senate now a little shorter 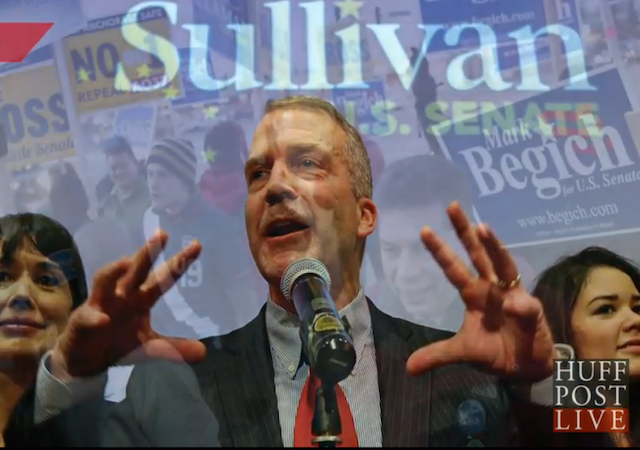 Begich had initially refused to concede the race, citing concerns over uncounted ballots. The race dragged on until last Wednesday, when the AP finally declared Sullivan the winner. In his concession, Begich jabbed at Sullivan about the need for bipartisanship, and hinted at a return to politics.

“When I spoke with Dan Sullivan today, I encouraged him to adopt a bipartisan resolve in the Senate,” Begich said in a statement. “Alaska is ill-served by the partisan fights that don’t reflect our state’s unique needs and priorities.”

The 52-year-old hinted in his concession that he might not be finished with politics. His 500-word statement listed a series of accomplishments, from expanding energy production to protecting military bases, during his six years.

“As a born and raised Alaskan, I will always be involved in my community, and the results of an election have never diminished my desire or passion to achieve these goals,” he said.

Sullivan seems ready to go to work, citing a desire to serve on committees that address issues related to commerce, public works, and the environment.

All eyes are now turned to Louisiana, where Republican challenger Bill Cassidy enjoys a double-digit lead in the Senate race over embattled incumbent Mary Landrieu. If Cassidy wins (and that “if” is slowly morphing into a “when,” even in the eyes of Democrats) Republicans will enjoy a 9 seat pickup and a thin majority in the upper chamber.

Is Begich so stupid that the irony of his statements regarding bipartisanship escape him? Or is he just another lying political hack?

It’s just a variation on “What’s mine is mine; what’s yours is negotiable”.

Or, “IF you beat me into submission, I have a few demands”.

Of course. The Collectivist Marxist-Leninist Progressive hypocrisy knows no bounds. They will shamelessly stand there and say “We won. Do what we want.” when they win, but then turn around and say “Ok, you won, now ‘compromise’ with us by abandoning your principles because ‘they’re mean’ or worse.

The Republican Majority should be telling them: “Go F%$& yourselves. You just spent the last 6 years telling us that ‘elections have consequences’ and those elected get to choose what gets voted on.’ After denying us, the minority, OUR Rights, we’re going to make you live by those same rules.”

Unfortunately McConnell won’t do that. He’s too wishy-washy. And even if he did, McCain would stab him in the back with a new “gang” because he’s a RINO.

Whereas before it was, “We won. Get over it.”

AP does not decide who wins elections. If they did have that power, Bill Clinton would still be President.

The AP reported the fact, as noted by many analysts, that it was impossible for Begich to overcome Sullivan’s vote totals given the number of uncounted mail in ballots remaining and the fact that Sullivan’s margin was being maintained.

Anybody think that there is any chance we can flip Angus King to caucus with the Republicans? And by that I mean that we can get him to “reliably” vote on Republican / Conservative issues without giving him anything more than a token position?

If Angus King flips parties, he will do so to “monkeywrench” the GOP agenda.

Exactly why the GOP should deny him a seat in the caucus if he does flip. It’s easier to deny him entry than to evict him after he’s in.

There are still 5 house races. I do not believe any Republican seats are at risk so the worse they can do is their current +12 net.

In other Alaskan news, Sarah Palin once again bucked her party and supported a conservative independent for governor over her former Lt Governor. Her candidate, Bill Walker, won a narrow victory, 48.1% to 46.4%

Sarah believes in reform, and that doesn’t have a party ALL the time…!!!

To misquote a Mark Twain misquote:
“Reports of her political death have been greatly exaggerated” –

Yes, Cassidy is having a good week. But he’s dealing with a ‘rat with a very powerful network in one of the most corrupt states in the country.

Now, more than ever, he needs to watch his back for a “December Surprise.”

I’ll call Landrieu “gone” when I see her ample back side hitting the door for the last time. It ain’t over until the fat lady concedes.