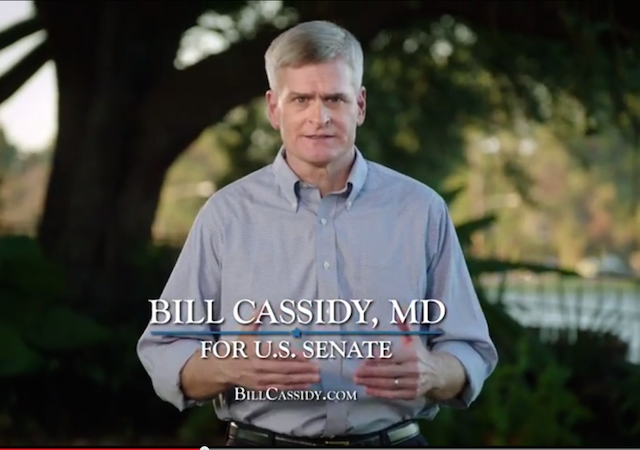 It would be sad if it weren’t so beautiful.

With just a few weeks to go until the Louisiana Senate runoff, Bill Cassidy is taking advantage of incumbent Mary Landrieu’s spiraling chances at re-election by pointing out Landrieu’s unfortunate tendency to vote for Obama’s pet policies a whopping 97% of the time.

Cassidy’s new ad, called “Represent You,” hits Landrieu on the issue of immigration, which is reemerging in talking points in conjunction with Obama’s impending executive action on amnesty.

An open-ended Gallup poll in October, less than a month before the midterm election, found only 7 percent of voters said immigration was the most important problem facing the country.

The issue wasn’t at the forefront of campaigns during the midterm, but occasionally popped up, as it did when Scott Brown (R) ran an ad on border security in New Hampshire over the summer, and when Arkansas’ Tom Cotton (R) said terrorists were collaborating with Mexican drug cartels during a tele-town hall meeting in October.

Republicans have positioned Obama’s executive order, which would keep millions of immigrants from being deported, as an overstep of his authority, and Sen. John Boehner (R) has threatened to sue Obama.

At this point, the best thing Cassidy can do is beat the dead horse. Keep in mind that, although neither Cassidy nor Landrieu won a majority of the vote in the general, more people voted against Landrieu than for her. If we can convince at least some of the outliers to swing Cassidy, Landrieu will be packing her bags on December 7, and Republicans will hold 54 seats in the Senate.

I hope Elbert Guillory’s still at it, too.

I imagine that Miss Piggy is all kinds of heartened by the support Pres. ScamWOW is providing her, what with crowing about an EO here, an EO there, here an E, thar an O, everywhar an EO.

AND on such popular items in Louisiana as Gorebal Climate Whatever and low intensity invaders.

“Mercy rule?” Heck no, do unto them as they would do unto us, only more so, with much vigor, style, and verve! In other words, grind’em into the dirt from whence they came.

And then salt the residue. For good measure, also give ’em a battlefield baptism like those troops did to those Taliban corpses.

Heh. WaPo thinks Boehner is a Senator! I remember when they were an actual newspaper and not just a Democratic Party house organ (although they were always biased, you don’t even hire lying pieces of crap like Dana Milbank or Ezra Klein if you care about the truth).

The contempt in which Democrats hold the voters is evident yet again in the idea that holding a vote on Keystone in the Senate after all this time will fool the people of Louisiana.

Chickens are coming home to roost – right over the Democrats’ heads.

Dead tree media and FCC media is so 1999 and on its way out. 2014 will be remembered as the first election where the voters got their information via social media, blogs, website aggregators (drudge), and talk radio.

Guess who owns all of those? (it sure ain’t leftists)

http://poll.democracyforamerica.com/?source=fb_adv.la_don_tcsw.20141107 Let’s have fun with polls. I picked Elizabeth Warren, Bernie Sanders, and Joe Biden, because any one of the three would be ideal Democrat candidates. If you were a Republican running against them for president.

There comes a time when one should simply turn off one’s ears and turn on the violence towards one’s enemies. Maybe Israel should stop playing patty-cake with their very existence.

Just remember what happened in Colorado (IIRC) when that nut tried to shootup a church on a Sunday morning. He got stopped by a lead projectile from an armed security guard (one of several the church arranged to have).

Allowing these vermin unfettered access to a synagogue is insane, given the reality in Israel.