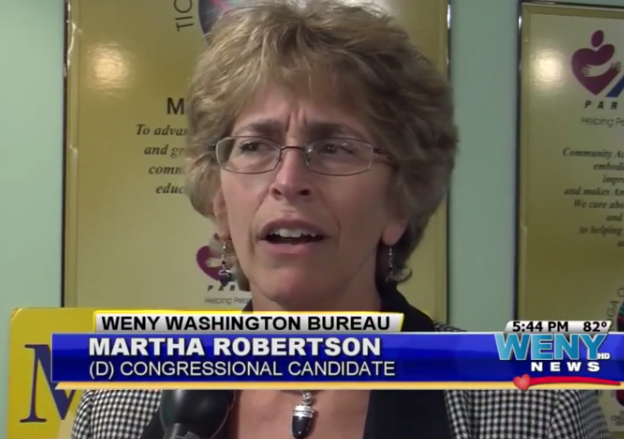 It isn’t over until the votes are counted, and miracles can happen, but it isn’t looking good for Martha Robertson, the Democratic challenger to Rep. Tom Reed in my home NY-23 district.

Once up a time, Robertson was a lead Democratic prospect to turn a seat from Red to Blue.

But now Robertson is being written off by every non-partisan analyst following the race.

We asked whether it was time for the DCCC to abandon Robertson, and pull its reserved television advertising.

One year ago, Republicans had just shut down the government, and Democrats declared they might win back the House, in part by picking up Republican-held seats in New York.

A year later, Democratic hopes of gaining up to three seats in New York are gone. They are more likely to lose three, and hope simply to break even.

Democratic Congressional Campaign Committee Chairman Rep. of Long Island calls New York a “microcosm” for the rest of the country.

“If Democrats are ever going to win back the House, they need to pick up seats in upstate New York,” said David Wasserman, who analyzes House races for the Cook Political Report.

That isn’t happening this year.

As to NY-23, The Daily News says Robertson’s chances have collapsed:

Democratic hopes of challenging Republican incumbents like Reps. Chris Gibson or Tom Reed in districts Obama won or nearly won have collapsed, while Democratic incumbents have been unable to shrug off GOP challengers.

While it’s a tough national environment, Robertson deserves much of the blame.

Literally nothing has gone right with Robertson’s campaign. Everything Robertson does backfires.

Robertson’s campaign got the bright idea of soliciting funds by falsely claiming that GOP operatives tried to take down her website. Backfire.

Robertson tried to appear as a healthcare moderate, then old videos surfaced in which Robertson advocated Obamacare as a stepping stone to single payer. Backfire.

Robertson decided that making fun of the fact that Tom Reed used to be very overweight was a good advertising tactic. Backfire.

The latest backfire is that Robertson’s her much coveted Sierra Club endorsement became problematic after the Sierra Club sued to close a local power plant and kill jobs in the district.

This isn’t the old district, where Maurice “Red” Hinchey was kept in office by a gerrymandered map which snaked its way from college town to college town to capture as many liberal voters as possible.

The district now is mostly rural, and leans Republican by a few percentage points.

Will the DCCC continue to throw good money after bad?

Update: This is about the best confirmation there is that Robertson’s campaign is a goner, the DCCC is pulling advertising air time reserved for the last two weeks of the campaign according to Roll Call, DCCC Cuts Airtime in 8 TV Markets:

The Democratic Congressional Campaign Committee has started to pull back their advertising buys in several congressional districts around the country, according to an aide.

At this point in the cycle, the cancellations — also known as “triage” — serve as a signal the party does not see a path to victory for these candidates or races. House Majority PAC, a Democratic super PAC, has already pulled some of its buys in the same districts….. 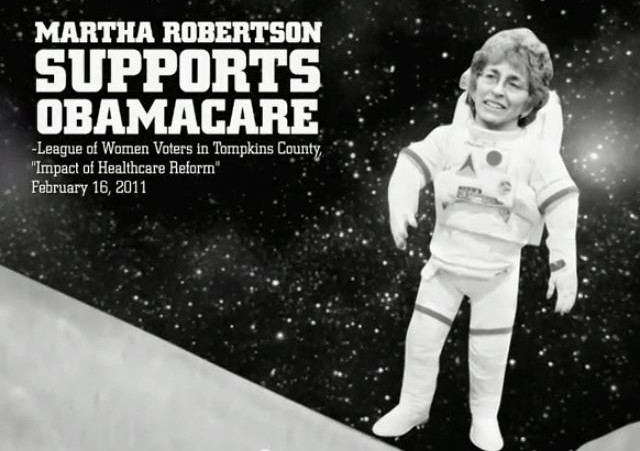 It couldn’t happen to a smarmier lickspittle toady-ette.

I can’t remember the last time I looked at someone, photo or in-person, who was so obviously a hard core libtarded looking specimen of the far left. Everything about her speaks to leftwingnutism – her expression, style, haircut, even the shape of her eyes and mouth – all scream far left agenda. Is there something in the DNA of many of them that links their appearance? I see this look in so many of them over and over. Or maybe it’s just a function of inbreeding – seek out those characteristics in each other, then breed more little libtards, so that they multiply exponentially.

It isn’t over until the votes are counted, and miracles can happen…

How many bags of ballots are they going to have to find in car trunks very late on election night?

I would disagree that this is the most hapless campaign. That honor belongs to Wendy Davis.

Heh.
And perhaps we can nominate Joni Ernst’s opponent Braley in the IA race for 2nd place…

I would rather they continue to throw money at it. In fact, they should double, no triple their ad buys. Spend, spend, spend! The more they spend here the less they have to do damage elsewhere…

So sad that another communist is stopped.
When will Louise Slaughter (CP-USA) be voted out?
Upstate New York. lower Alabama without the funny accents, well a less funny accent.

Oh, Martha’s a loser and was identified as such early on, particularly by LI Professor Jacobsen, after the phony hacking claim and fraudulent fundraising from it.

But it would have been better to see DCCC and “outside group” money continue to be wasted on her. Now it may be spent on other races where it could make a difference.

As Yogi once said, “It ain’t over until it’s over,” so don’t let up now. It is more important than ever to reject Robertson by a larger margin than Nate lost by last time. A message needs to be sent to other far left Ithaca liberals that they are outside the mainstream in the western southern tier and do not speak for everyone else. A convincing defeat for Robertson should put paid to political nominations for her for positions not confined to the Ithaca area. And it should show other Ithaca area liberals that having a voting record like Robertson’s won’t play outside the limited area, perhaps they’ll moderate their votes for Ithaca political correctness if they have ambitions for higher office. Robertson has not only run a “flop” of a campaign as analyst Rothenberg said but her programs, ideas, character, and above all her record just can’t be sold outside the Ithaca and environs area.

[…] The Cornell Review has covered some of her recent shady behavior and unethical collusion with the left-leaning Cornell Daily Sun. Legal Insurrection has a plethora of articles on just about everything else she has done wrong. Here’s an excerpt from the latest piece: […]