Sierra Club endorsed Martha Robertson, but now it has sued to shut a power plant and kill jobs in the District. 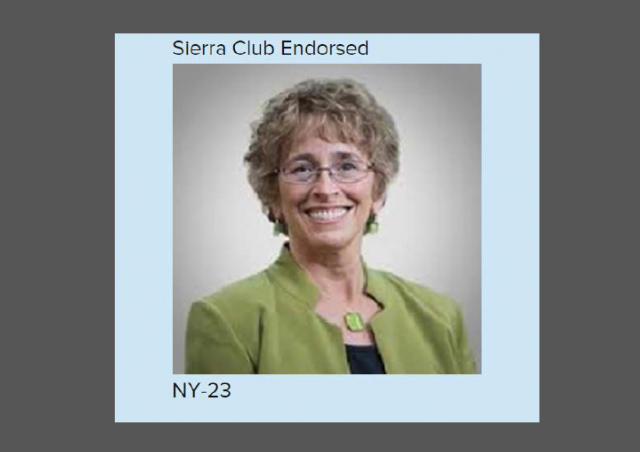 Democrat Martha Robertson, whose struggling campaign to unseat incumbent Tom Reed has struggled (and then some), didn’t need any more problems than she already had.

But the Sierra Club, which has endorsed Robertson, just created more problems by suing to prevent conversion of a coal fired power plant in western New York to gas. That would result in the power plant shutting down, killing jobs.

Tom Reed today vowed to stand firm against Martha Robertson’s extreme liberal agenda and the devastating actions of Robertson’s liberal supporters and campaign donors who have filed suit against the Dunkirk NRG conversion in Chautauqua County.

The Sierra Club has joined with Ratepayers and Community Interveners to file suit with the State Supreme Court to derail the $140 million dollar project to convert the NRG power plant to natural gas. The suit threatens the bipartisan solution supported by Governor Cuomo and Senator Schumer – likewise, Robertson’s supporters also threaten local jobs with a potential devastating effect on Chautauqua County.

The Sierra Club has endorsed Martha Robertson and contributed thousands to her campaign. Similarly, the Ratepayers and Community Interveners group consists of 51 members, primarily residing in Tompkins County, that have donated over $10,000 dollars to Martha Robertson’s campaign.

Robertson has distanced herself from the Sierra Club lawsuit, but the damage is done.

The Sierra Club is suing the state Public Service Commission over plans to re-power the Dunkirk power plant. Those plans call for the plant to be converted from coal to natural gas.

The lawsuit will delay the switch-over, and that is not sitting well with some lawmakers in the Southern Tier….

“I’m confident that we will win, and we will send the message that Chautauqua County knows what’s best for its residents and its citizens, but we cannot underestimate the risk that this lawsuit represents to our community,” said Reed.

Last December, Governor Cuomo announced the plan for the plant which includes adding 50 jobs in the area. The plant is the largest taxpayer in Chautauqua County and provides more than 40-percent of Dunkirk’s tax revenue….

“As my opponent has said, you know, she was very clear on the record when she came to Dunkirk and she tried to say she supported repowering, but just so we’re clear, she said supporting repowering through biomass generation. Not natural gas,” said Reed.

But Robertson’s campaign made it clear Thursday night that she does not support the lawsuit.

The Sierra Club, by the way, has endorsed her as a candidate.

Robertson told us, “While I understand the Sierra Club’s position, I also know that these jobs need to stay right here at home. I don’t have anything to do with this lawsuit and I do not think it’s in the best interest of working people in Chautauqua County. “

The problem for Robertson is that this all fits into a theme Reed has been pushing, that Robertson is an “extreme Ithaca liberal”: 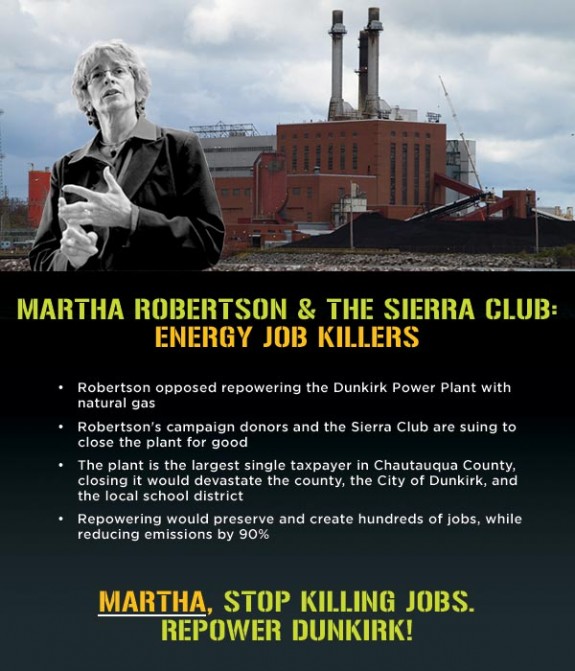 Video report (autorun) at the link.

Sierra Club likes their windmill gauntlets and solar ovens, and that’s only part of the environmental disruption that occurs during deployment, which is only one step in “green” technologies’ evolution, from recovery to reclamation.

Professional environmentalists are so fickle. They remind me of the professional civil and human rights activists.

Said the Scorpion to the Frog, “you knew what I was…

Don’t forget to mention that the Green’s actions threaten reliable power, we need to lay down markers now because there’s a good chance their current campaigns will result in brownouts or even rolling blackouts. They’re shutting down a very large fraction of the nation’s baseline coal plants, and as we see fighting “clean”, certainly cleaner, gas power every inch.

Ah ha, what will the iPhone, iPad, iPod crowd do once they are not able to recharge their iBatteries? Plus, it’s very overcast, hiding the sun, and wind has been stilled! Bummer!

I’m beginning to suspect that Martha is really just Woody Allen in drag and this “campaign” will soon appear as one of his absurdist films.

It seems far more rational than that she is really a major party nominee for Congress.

Non subjective comment….the fact is that this did NOT happen overnight..the plant has had years to plan around this..now it’s an emergency…so that is a fact. Another fact is that bio fuels are still a fossil fuel and have NOT proven to be less harmful than non fossil fuels to the atmosphere..Martha was for bio fuel to ‘save’ this plant, even though it’s environmentally not as clean as other renewables and that it had about zero chance of ever happening as well.
Scott Noren DDS
Ithaca, NY
So..I would like to see the plant close and employ the same workers at a plant that makes windmill turbines, or geothermal products or anything of the sort.

Given that many of the same people that filed a lawsuit against the Dunkirk power plant conversion to natural gas are Robertson contributors, how long will it be before they file a similar law suit against the power plant conversion in Lansing, a plant vital to the economy of Lansing and Tompkins County. So, Robertson had to choose between her environmental extremist supporters for whom killing fossil fuels is nearly a cult or face total decimation on election day by supporting them. She chose to abandon them. The lesson to them should be to put away their checkbooks and write her off as the DCCC now seems to be doing by withdrawing advertising funding. Her actions should not surprise them. When Cornell converted to natural gas, Robertson the “fractivist activist,” was absent, saying nothing. So, Robertson is an extreme Ithaca liberal, but not very good at even that, it seems.