Religious freedom wins this round of City vs. Church 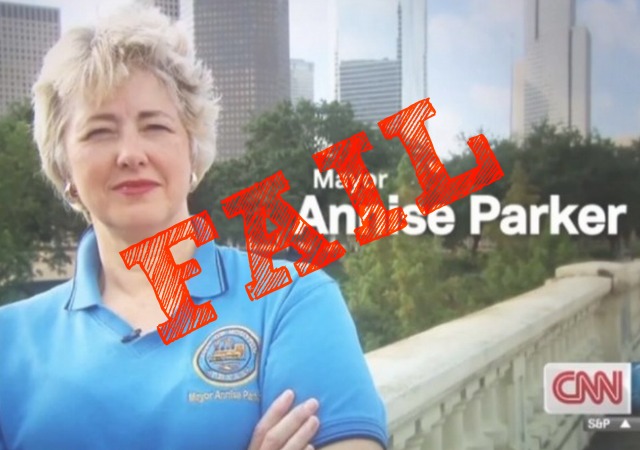 Ed Whelen at National Review has the scoop:

I’m pleased to pass along word from the Alliance Defending Freedom, counsel for five Houston pastors, that Houston mayor Annise Parker has—finally—entirely withdrawn the harassing subpoenas that the City unjustifiably inflicted on the pastors.

I’ll repeat what I said in my first post on this matter: The law firm of Susman Godfrey, which is representing the City “pro bono” in the litigation, deserves to share in the ample blame for this fiasco. In particular, Geoffrey L. Harrison, Alex Kaplan, and Kristen Schlemmer of that law firm seem not to have given a moment of careful thought to the First Amendment implications in this case of the sort of bullying discovery that they and other lawyers routinely engage in.

“The mayor really had no choice but to withdraw these subpoenas, which should never have been served in the first place. The entire nation–voices from every point of the spectrum left to right–recognize the city’s action as a gross abuse of power. We are gratified that the First Amendment rights of the pastors have triumphed over government overreach and intimidation. The First Amendment protects the right of pastors to be free from government intimidation and coercion of this sort.

But the subpoenas were only one element of this disgraceful episode. The scandal began with another abuse of power when the city of Houston arbitrarily threw out the valid signatures of thousands of voters. The city did this all because it is bent on pushing through its deeply unpopular ordinance at any cost.

The subpoena threat has been withdrawn but the mayor and the city should now do the right thing and allow the people of the Houston to decide whether to repeal the ordinance.”

Following a bitter battle over an overreaching city ordinance, Bayou City clergy and the city of Houston weren’t on the best of terms. The ordinance, dubbed “HERO,” allows transgendered persons to sue businesses that prohibit their use of their preferred bathroom.

Shortly thereafter, local pastors who were vocal in the fight against the city of Houston received subpoenas requiring any and all communication, even text messages, but most disturbingly:

All speeches, presentations, or sermons related to HERO, the Petition, Mayor Annise Parker, homosexuality, or gender identity prepared by, delivered by, revised by, or approved by you or in your possession.

So egregious was the overreach that even the ACLU issued a statement asking Mayor Parker to reconsider the subpoena saying, “While a lot of things are fair game in a lawsuit, government must use special care when intruding into matters of faith. The government should never engage in fishing expeditions into the inner workings of a church, and any request for information must be carefully tailored to seek only what is relevant to the dispute.”

Thankfully, religious freedom wins this round of City vs. Church.

When we all know that’s exactly what she did have her minions do.

And a great thing about this episode…pastors of all races joined in kicking Porker’s ample butt.

The important point I think is that the Pastors she subpenaed were not all a party to the lawsuit against the city. They were just on Parker’s enemies list.

(full disclosure: my wife worked for Sussman Godfrey when we first got married 24 years ago)
For a law firm that supposedly only hires the best and brightest, Sussman Godfrey, the firm representing the City Pro Bono in this matter, sure stepped on it’s own crank here. I cannot believe that one of the shareholders who was supposedly supervising this work (I’m sure it was a baby lawyer (asociate) that did all the actual work) actually approved this move. It was beyond dumb. It was catastrophically stupid. They just lost the case here and it hasn’t even gotten to Voire Dare yet!

They were no doubt salivating over the potential for pumping up the billings for city work instead of considering consequences.

Saint Peter has a subpoena for Ms. Parker.

Maybe St. Peter will send her a postcard of the Pearly Gates – it’s the closest look she’s likely to get.

Houston is a very strange place. For being a center of energy growth and development, they have some odd politics.

For instance, Sheila Jackson Lee. Not only is she one of the dumbest people in Congress – no small achievement in itself – but she is also regularly voted the worst to work for among staffers. She’s known to call up staff members at midnight to go pick her up something from an all-night drug store or restaurant. She berates people publicly for mistakes she herself makes.

A nasty piece of work, is Sheila. But now she may not even be the most evil elected official from Houston.

I have a very difficult time believing the mayor had not read the subpoenas before they were issued. I blame Parker, period. I am a retired Federal official, and I do not know of any official that ever allowed out-sourced legal work to go unchecked. My guess is that the mayor had a hand in the wording of the subpoenas. For all we know, the firm may have warned her that she was ignoring the constitution.

We cannot trust Parker to tell the truth. She twitted about the subpoenas; but later in a press conference claimed not to know what was in the subpoenas. If she was so shocked by the “over-reaching” nature of the subpoenas, why did she not do something about them at once and not wait two weeks? Even then, she did not change anything by withdrawing the word “sermon” but keeping the word “speech”. This tells me that Parker was wedded to the “over-reaching” language. And did she really think we would forget all about the subpoenas by “switching topics” with more of her twits-the false claim that her daughter had difficulties obtaining her drivers licenses because she had two moms.

My guess is that she decided to withdraw the subpoenas before she talked to the group of preachers. She has no problem opposing God’s word. Pressure from Christians did not change her mind. She had an entire nation opposing her–believers and nonbelievers, and she knew that legally she did not have a leg to stand on. She does not want to be recalled. And she hopes to have a political future by having withdrawn the subpoenas.

Her lap-dog city attorney is on tape saying that the subpoenas were not broad enough, and he would get what he wanted.

That would be a day or two before he would disclaim knowing their contents, and joining Porker in saying he’d never, ever…not in a MILLION years…ask for the contents of a sermon.

Porker also defamed the Texas DPS in the last few days over some lie about her daughter being denied a driver’s license because of her mother’s marital status.

They just lie some more.

Gender and sexual fluidity or it’s discrimination. Step up to the plate, Parker. Progressivism/incrementalism is an immoral philosophy.

Separation of church and state ends with the establishment of progressive morality (i.e. religion). Complete with the sacrifice of human lives in planned parenthood rituals. Completely degenerate.