Even liberals think she went to far in subpoenaing sermons from local pastors. 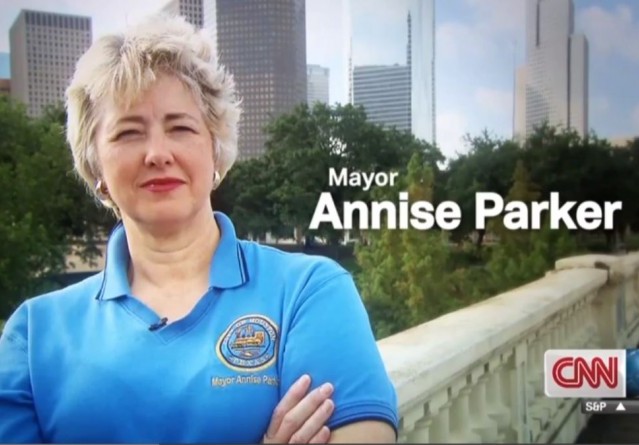 Houston Mayor Annise Parker made national headlines last week when it was revealed she subpoenaed the sermons of local pastors.

Following a brutal battle over a city ordinance which many believed was an egregious encroachment of local government into the territory of religious freedom, Parker, Houston’s first openly gay mayor, subpoenaed the full text of sermons mentioning her name or anything having to do with homosexuality.

Right leaning citizens weren’t the only ones to shirk from Parker’s drastic and seemingly vindictive actions. The ACLU and other liberal leaning organizations expressed grave concern with Parker’s unprecedented overreach.

The ACLU said in a statement, ““While a lot of things are fair game in a lawsuit, government must use special care when intruding into matters of faith. The government should never engage in fishing expeditions into the inner workings of a church, and any request for information must be carefully tailored to seek only what is relevant to the dispute.”

Following blowback, Parker announced the City of Houston would clarify the subpoenas which were, “too broad.” “We are glad that Mayor Parker has acknowledged that subpoenas issued in ongoing litigation were too broad and that there is no need to intrude on matters of faith to have equal rights in Houston. There was no need to include sermons in the subpoena in the first place,” said the Texas Chapter of the ACLU.

“A liberal advocacy group, Americans United for Separation of Church and State, also expressed concerns about the subpoenas. In a statement to Religion Dispatches, Director of Communications Rob Boston said the actions have the appearance of a “fishing expedition.”

“I’m not surprised that the pastors are resisting the subpoenas, and, assuming there is not more to this story than has been reported, I think they might be successful,” he added.

Perhaps the severe backlash Parker received will deter others from similar actions in the future.

And yet Obama and the FBI won’t even CONSIDER looking into a mosque which produced a radical Islamist that beheaded a woman in Oklahoma.

The possibility that this, if allowed to proceed, could someday go against the Muzz is exactly why the ACLU came out against it.

I believe you mean “shrink away”, as opposed to “shirk away”. Shirk means to avoid, which would be almost but not quite redundant. 😉

I’m not an attorney, but I am fairly sure the appropriate response to her subpoena starts with the words “fuck you”

I beg to differ, sir! My choice of first word would be “GO”, as in GFY!

The problem with that invitation being that it would be most welcome to Mayor Porker.

You made me think of Al Sharpton referring to Ottawa as Iowa. I can hear him now, “dah mayah of Hyoostun, Anus Pahkuh…”

Hey, I have NOOOOOooooo problem with Anus Porker or her agents attending church.

Also, most of these churches broadcast and/or tape their services. I wonder if that’s true of a lot of mosques?

Now, I have YET to see a subpoena directed at one of the many black churches that oppose Porker’s loopy queer ordinance.

Good point. If they want to know what’s in the sermons, just attend a service and listen. The place where anti-homosexuality is rife is in the mosques – but I don’t see them pursuing those. Probably because Christians aren’t known for beheadings or terrorist attacks, so it’s safe to attack them. Liberalism is indeed a mental illness.

Thing about the subpoenas, is why exactly the City of Houston is issuing them at all, why a judge will allow them.

Unless I am badly mistaken, this is the deal. The City of Houston passed an Ordinance that allows “non traditional sexes” to use any bathroom they want. Thus those males who “consider themselves females” although still fully equiped with male genetalia are permitted to use the women’s bathrooms, along with little girls, teenagers, adult women etc.

A group, outraged, formed a petition to have a citywide referendum on the ordinance to repeal it. If memory serves, the number of valid City of Houston resident voter signatures required was about 18,000. The group gathered over 50,000.

The CityCounty comptroller/auditor/whatever in charge of determining if the 18,000 had been met, determined it had been met.

The City, Mayor Parker and City Councel, said screw you, we’re not putting in on the ballot ever.

The group sued to force the City to comply with statutory law.

Why are subpoenas even necessary to establish the referendum signature requirement was met, and the City did not comply? Go straight to oral argument and decision.

Pretty close (and I’m not an expert here).

The City Attorney unilaterally…and without any support…declared a lot of the 17K PLUS signatures were not valid, ignored the rest, and the fact that the OTHER city authorities (including Porker) all said, “Meh. There’s enough.”

That, I think, is the crux of the suit against the City.

Intimidation, plain and simple. And the dyke that the citizens stupidly elected who is now imposing the homosexual agenda on the city would like to bankrupt the churches with legal fees.

Of course they need subpoenas. How else are you supposed to keep your enemies list up to date?

Yea, a lot of libs are kinda freaking out over this. NOT because they have a real problem with what she’s doing, it’s more like:

Exactly! She let the mask slip too soon — although this is understandable. Ever since Obama was elected, that mask has been slipping a bit.

The Media, always biased, threw away even the fig leaf of impartiality it claimed so they could go all in for Obama.

We’ve had the records of private citizens exposed for having the audacity to question President Narcissus (and by the way, where ARE Obama’s college transcripts, Lefties?).

We’ve had the First Amendment under assault only a few scant years after the obviously-hypocritical Leftist claim of “Dissent is the highest form of Patriotism!”

They feel power slipping away, so their first reflex is to squeeze harder.

I remember in my Education Law class, on a paper about the legality of the rosary in the public schools, citing (and making an Appendix entry) a Texas-branch ACLU cease and desist letter to the local school officials concerning the students’ First Amendment right to wear a rosary. Similar stuff from Colorado and, I think, Wyoming. The western branches of the ACLU don’t seem as bad as the others.

I don’t remember the particular details, but a number of years ago, a prosecutor demanded the Klan membership rolls of their Beaumont Infestation, or whatever it’s called. The ACLU came to their defense and sent a black lawyer to represent the Klan in court, and they won.

I wonder when the ACLU is going to get in a twist over the CA Dept of Health mandate that all churches WILL cover abortion in their health insurance policies – under the guise that abortion is a “basic medical service”.

That is a good question. Has anyone approached them about taking on such a challenge?

Title 18, U.S.C., Section 242
Deprivation of Rights Under Color of Law
Acts under “color of any law” include acts not only done by federal, state, or local officials within the bounds or limits of their lawful authority, but also acts done without and beyond the bounds of their lawful authority; provided that, in order for unlawful acts of any official to be done under “color of any law,” the unlawful acts must be done while such official is purporting or pretending to act in the performance of his/her official duties. This definition includes, in addition to law enforcement officials, individuals such as Mayors, Council persons, Judges, Nursing Home Proprietors, Security Guards, etc., persons who are bound by laws, statutes ordinances, or customs.

I still think that the ACLU is the enemy. They’re probably nervous about Anisse Parker because they fear a case might generate sympathy for Christians.

And I d-double dare the liberal meddlers to go and insist that some imam perform a SSM and a halal caterer barbecue a whole hog for their event.

OMG! Those two cute Persian boyz are gonna have a PIG PICKIN’ at their reception!?! Count me in! I’ll bring some sauce, but be careful it’s kinda spicy —- wink, wink!

The ACLU is either not happy or concerned that accelerated progress will stir a backlash. Anyway, gender fluidity, open marriage, or it’s discrimination. Their support of selective exclusion through normalization of homosexual behavior has consequences.

Houston, we have a problem! Man, if you’ve lost the ACLU you’ve lost pretty much everybody.

It is actions like this that cause even liberals to hear Niemoller’s lament in their heads.

Pigs are a-flyin’ in Houston and that does not include the mayor, eh?

What an upside down turn around…

This is obnoxious and outrageous. Sadly, it’s also the kind of jack-booted thuggery you’d expect from liberal fascists.

My knee-jerk reaction is to tell the Mayor to get stuffed.

However, there must be a lot of churches in and around Houston Texas. Perhaps the better approach is for all of them to comply — in full. They should send printed copies of their sermons to her office, and I suggest printing them in unusual type fonts that are difficult to scan. Consider sending multiple copies.

And then, just for fun, each and every sermon should include a single reference to the Mayor — by name — or homosexuality. Even if it has nothing to do with the subject of the sermon.

Bury the mayor’s office in paper.

A couple of points. 1. In my experience activist lesbians are the worst ideologues. Think Rosie O’Donnell on steroids.

2. If I were the churches, I would sue and immediately demand discovery subpoenas on every email, memo, phone contact, meeting notes, tweets, texts and any other forms of communication between the mayor’s office, administration, and any outside contacts.

3. the only way to break the back of PC, which is a cancer that is destroying our nation, is to target it and destroy it. It is a mile wide, but an inch deep and uses isolation as a tool to destroy its enemies. I say do the same in return. If the mayor wants to eat at a restaurant, boycott the place. Same with any business she frequents. Protest at her house, her business, heck her friends house. Be nice, be professional, but be there.

Take photos, snag license plates, etc. Let the people know who she associates with, and soon she’ll have no one to associate with. Not because she’s a lesbian, but because she is an abusive politician.

Texas will turn purple then blue unless it stops this kind of “immigration” of liberals and their bad ideas.