Hong Kong’s 1-percenters are staying out of the mix, for now. 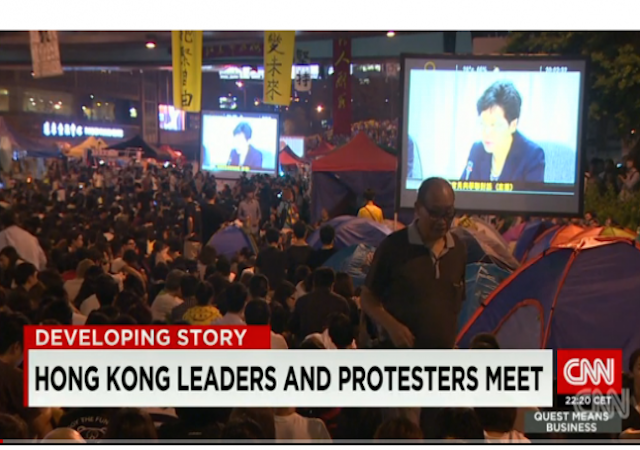 My husband and step-daughter are touring Asia, so I asked them what the coverage of the Hong Kong protests has been like.

Instead of sending out officials and experts to offer false assurances, the Chinese stations simply black out the reports about the demonstrations. However, my husband indicates that many people outside of China are closely following the developments in the international fiscal center.

The demonstrations continue unabated. In fact, the latest round was inspired by a little political candor from C. Y. Leung, the Chief Executive of the Hong Kong Special Administrative Region who is the focus of protesters’ ire.

Many were angered by Mr Leung’s comments in an interview on Monday, where he said fully democratic elections would lead to populist policies, as poorer residents would have a dominant voice in politics.

“If it’s entirely a numbers game and numeric representation, then obviously you would be talking to half of the people in Hong Kong who earn less than $1,800 (£1,110) a month,” he said.

These startlingly frank remarks have not gone down well with many demonstrators, who see it as proof that the political system is rigged on behalf of the rich, the BBC’s Juliana Liu in Hong Kong reports.

It tallies with the narrative of the city as a place where the gap between rich and poor – which is one of the highest in Asia – is rising, our correspondent adds.

A CNN report describes the latest approach by Hong Kong’s officials: Invite the students in to talk, and give them a lecture on law while offering to do a report to send to Beijing. The interaction of the “t-shirts” versus “the suits” was played on a big screen, so that the demonstrators could view the dialog.

While Chief Secretary Carrie Lam, Hong Kong’s second in command, called on the protesters, led by the Hong Kong Federation of Students, to work within the system, student leaders said they had no choice but to work outside it.

“We should work within the system and enhance the transparency and competitiveness of the system as a whole,” Lam said. “This is a good opportunity and a meaningful dialogue. I hope the community will stay united.”

…Lam said the Hong Kong government would convey the views of the Occupy movement to Beijing by submitting a report to the Hong Kong and Macau Affairs Office reflecting the events in the city since August 31.

But [student leader Adam] Chow questioned what effect such a report would have.

“What concrete change will this report lead to?” he asked. “Would it help lead to adjustment of the framework or the future direction of legislative council elections?”

Chow is right to be skeptical, given that the Chinese are apt to treat the report exactly as they handle the news broadcasts — by making it disappear entirely.

Given their roles in this major economic power-house, how are Hong Kong’s 1-percenters handling the situation?

Privately, the tycoons express a broad range of views on the street protests, and some have been more willing than others to accept the goal of broader public participation in elections, as opposed to the circumscribed version offered by China. Many do not trust Hong Kong’s leader, Chief Executive Leung Chun-ying, regarding him as someone with authoritarian tendencies and a streak of economic populism who might someday raise their taxes to pay for greater social spending.

But public reticence is all that Beijing is asking of the business elite for now.

So the waiting game continues.