At least if engagement is any indication.

A new Gallup Poll suggests that candidates and party officials should brace themselves for low voter turnout during the 2014 midterms.

This new data shows that voters are less motivated, less excited, and less interested in this year’s election than they have been in the past. Because there is a positive correlation between voter engagement and voter turnout, Gallup’s analysts predict that this year’s midterms could see lower voter turnout than in the past two midterm cycles.

On each of three indicators of voter engagement in midterm elections — how much thought Americans have given to them, their expressed motivation to vote, and their enthusiasm about voting compared with past elections — 2014 looks more like lower-turnout years 1998 and 2002 than higher-turnout years 2006 and 2010. 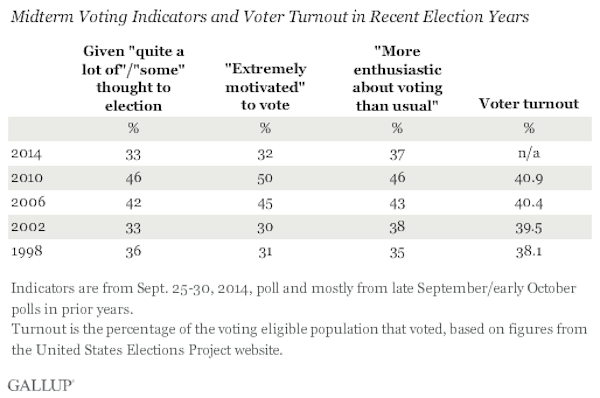 Gallup’s analysis explains that voter turnout is also affected by the electorate’s satisfaction (or lack thereof) with both the executive and legislative branches, and with the controlling party:

One likely reason voter turnout was higher in 2006 and 2010 was that Americans were deeply dissatisfied with the state of the nation, as well as the jobs the president and Congress were doing. In those elections, the same party controlled the presidency and both houses of Congress, so voters looking to change the government had a clear and obvious way to do so — voting against members of Congress from the majority party. And that is precisely what happened, with Democrats winning control of both houses of Congress in 2006, and Republicans winning control of the House of Representatives in 2010.

In 1998 and 2002, in contrast, Americans were generally pleased with the way things were going in the country and with the job performance of the president and Congress — even with divided party control — and were thus less motivated to use their vote to try to change the government. Accordingly, there was little change in the party composition of Congress after those elections.

This year, we’re seeing a mixed bag. Previous polling data suggests that Americans are dissatisfied with the job politicians in Washington are doing; however, a divided legislature complicates things by making it more difficult for Americans to decide who is responsible for their dissatisfaction.

Even if voters do decide to stay home, it’s likely that this will still offer Republicans a slight advantage at the polls:

Usually, Republicans vote at higher rates than Democrats, and this is evident in higher scores for Republicans than for Democrats on the voter engagement questions, including this year. In fact, the Republican advantages on each of the three turnout measures at this point approach what Gallup measured in the strong GOP year of 2010 rather than in other midterm election years. As a result, even if overall turnout is depressed compared with prior years, Republicans appear poised to turn out in greater numbers than Democrats.

The atmosphere this cycle doesn’t feel similar to 2010; at least within the Republican Party, collective uprising has been replaced by an unwillingness in the base to do anything that doesn’t end in the burning down of the Establishment. Conversely, the Establishment has doubled down on strategy, which has alienated the base in some states.

2014 won’t be a “change” year, as the Gallup analysis notes, but I do think that Republicans will pull out a narrow majority in the Senate and regain control of Congress, even if some voters choose to stay home on Election Day.

I think the low turnout polling reflects a general malaise and fed-upitation among the American voting public. It’s been six long years of nothing but lying, ineptitude, caterwauling, blaming, etc., enough that anyone might go with ear plugs and blinders.

Add in the factor that there is more than a little suspicion that the vote count that will be reported by the Media will have only a marginal relationship to the number of votes actually cast by those legally entitled to vote in each jurisdiction.

I recall that Trey Gowdy asked Eric Holder, “If the President can decide to ignore some laws and selectively enforce others… can he ignore Election laws?”

Heh. I saw Trey Gowdy on cable last night in an episode of Forensic Files. He was a prosecutor for Spartanburg County SC for 15 years and appears in several crime shows. What’s funny is his hair is cut different in every episode, and he still makes drastic (for a short haired male) changes to his style after making Congress. I love the guy. I’m from NC and we offered Clay Aiken in an even-up trade for Trey Gowdy, but they just laughed at us.

Yeah, hard as your HEAD, clownselor.

(Gus is out sick today. I’m filling in).

From my long experience with Guz, Thursdays are lite days. He may be forced out of the office for his government job. Don’t know.

On the other hand, he may be a gonner…until he can lie his way into another suck-puppet.

You are one of the sharpest knives in this drawer.

I envision my vote like knife into the back of that lying sellout Kay Hagan. I’ll be at the polls bright and early.

I will be voting in dark blue, belly-of-the beast, Chapel Hill, NC. I will vote, but will do so very reluctantly. My hope and change: to hope our leadership changes in both houses.

The rightfully depressed Democrats are dragging down the numbers. The article went on to say that Republicans lead Democrats by 19 points in “Motivated to Vote”, 44% to 25%, and by 18% wrt “Enthusiasm About Voting”, 48% to 30%.

These numbers are just a little behind those of 2010.

But with a month to go. Lots could go worse for Dems what with ISIS, ebola, life in general, etc. Plus there’s the possibility of an October Surprise from Obama that HE thinks is a great move, but backfires like his major gaffe “my policies are on the ticket this election” or whatever he said. Some really dumbass executive order maybe. I hope so. Every move he makes lately is a howler.

The Gallup poll gives the dates of their surveys. This year it was in late Sept. One of the polls taken in 2010 was from August and the other from October. Polls are snapshots in time.

The Republican establishment doe not deserve it but here’s hoping the Democrats continue to implode.

I would add only that polls are fuzzy snapshots in time.

Barry is the original “Slick Move Ex-Lax” feller.
Think I’ll just gonna call him “Ex-Lax Obama” from here on out.

RE: “there’s the possibility of an October Surprise from Obama that HE thinks is a great move, but backfires like his major gaffe “my policies are on the ticket this election”

Reading chicken entrails leads me to the same conclusion AND I get some good BBQ out of the deal.

Two birds with, er… from one bird. Awesome.

I don’t care if my ==o falls off that very morning, I WILL be voting.