And it’s not just “likely voters” who feel that way. 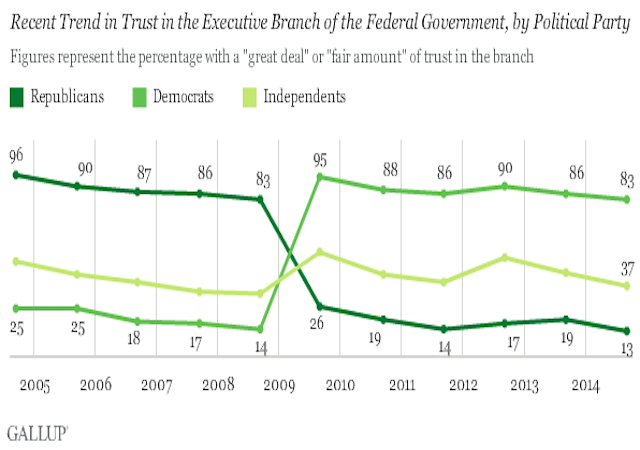 Gallup’s new poll on Americans’ level of trust in our three branches of government has revealed exactly what you would expect: they don’t.

We already know that likely voters, for the most part (but just barely,) have some idea of who controls the House and the Senate, but this new poll from Gallup offers a whole new perspective that could make that knowledge even more valuable to conservative campaigns as November looms ever closer.

Americans have generally had the least trust in the legislative branch, consisting of the House of Representatives and the Senate, but never lower than the 28% who do so now. The prior low was the 31% measured in 2011, shortly after Congress and the president engaged in contentious debt-ceiling negotiations.

Trust in the legislative branch had recovered slightly during the previous two years, to 34%, but is down significantly this year. As recently as 2007, 50% of Americans trusted Congress, but that trust has eroded amid a struggling economy and an era of intense partisan gridlock. This has been particularly acute since Congress was divided between a Republican House and a Democratic Senate after the 2010 elections.

This isn’t surprising; between the stalemate in the Senate, cannibalism in the House, and no clear consensus on the part of conservatives as to how we should go about actually getting an agenda passed, it’s no wonder America has exactly zero faith in either party’s ability to get it right.

The situation with trust in the executive branch doesn’t look much better:

After a sharp drop from last year, trust in the executive branch is the lowest it has been during President Barack Obama’s tenure, at 43%. The historical low of 40% was measured in April 1974, months before Richard Nixon resigned amid the Watergate scandal. Trust in the executive branch was also in the low 40s during the last two years of George W. Bush’s presidency.

Americans’ trust in the executive branch has surpassed 70% on two occasions in Gallup’s trend — in 1972, the year Nixon was re-elected in a landslide, and in 2002 under Bush, shortly after the 9/11 terrorist attacks. The high during Obama’s presidency so far is 61%, measured during his first year in office.

Unsurprisingly, the partisan divide over trust in the executive depends almost entirely on which party holds the White House:

Americans’ trust in the executive branch seems to be influenced mostly by the party of the president, at least for those with a party preference. Currently, 83% of Democrats and 13% of Republicans say they have a great deal or fair amount of trust in the executive branch at a time when a Democrat resides in the White House. Independents’ trust (37%) is currently closer to the level of Republicans than of Democrats. When Republican Bush was president, a similar partisan division was seen, with the trust levels of the parties reversed.

Coming out on top is the Judicial Branch, which still currently holds around 60% of Americans’ trust:

This polling data is significant because of its interesting correlation with the data showing only around 60% of likely voters know who controls Congress. Here, we see that a random sampling of around 1,000 people, some of whom are probably “likely voters,” don’t trust the government to do its job. Just over half of those in that group who vote have any idea of the partisan dynamic controlling Washington.

If Republican campaigns can capitalize on this disparity, and emphasize that Democrats essentially control 2/3 of the governing bodies in Washington, we might just be able to turn the tables.

“Running against Barack Obama” probably won’t work in 2014, but “running against the destructive, untrustworty Democrats” just might.

Hmmm.
The partisan elements are showing expected behavior. The Independents seem to be relatively steady. Yeah, “America doesn’t trust WashDC” but I am not seeing much new in the numbers from previous years.

I think growing numbers of Americans are tuning out the media resulting in growing ignorance of details and specifics. News media has divided and pushed to the extremes. Name a nationally available cable or network news channel that doesn’t sway things left or right. A lot of the people who can’t stomach Chris Matthews also can’t stomach Sean Hannity.

Those of us contemporary to the free love/flower power, civil rights, assassinations, Viet Nam, Watergate, Nixon pardon, Jimmuh Cartah era, say 1963-79, can identify with being tired of constant bad news and simply turning a blind eye, deaf ear to it.

My husband and I are both part of the age demographic you point to, but neither one of us could imagine turning a blind eye and deaf ear to what’s going on now. Quite the opposite.

We are not typical. That’s the problem. We are a minority in that regard.

Yes. We’re all also not victims of the odious leftwing public education system that has been inflicted on our kids and grandkids for the last forty years.

I was just thinking I’d like to see a poll like this by how much each party trusts the mainstream media.

What this demonstrates is that 83% of ‘rats and 13% of ‘pubs can not muster two firing brain cells among the entire lot of them.

As polling agencies go, Gallup isn’t as bad as many are in their biases, but Rasmussen does a better job of getting accurate polls, be they trends or snapshots.

At this point in the Obamic Regime, continued faith in Barracula can only be evidence of a death wish.