Obama Polling Below Bush at Same Point in Presidency

Obama Polling Below Bush at Same Point in Presidency

How far the mighty have fallen. 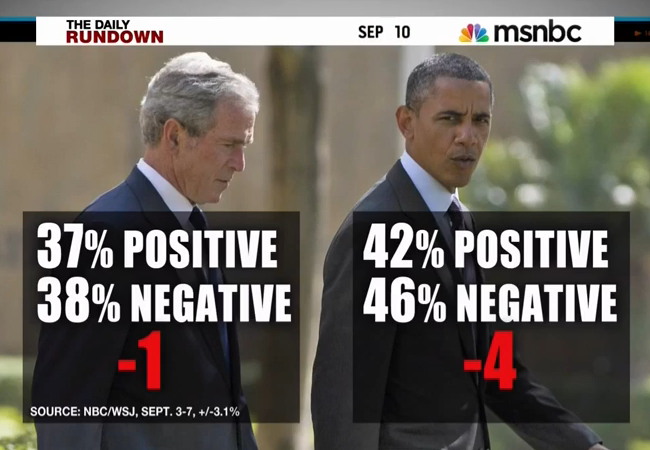 In a matter of six years, Obama has earned a higher negative rating than George W. Bush had at the same point in his presidency.

It should be noted that Obama has managed to reach these new lows in polling despite a tremendous amount of help from the media, an advantage that George W. Bush never had.

In what was once viewed as a strength, Obama’s waffling on handling the Islamic State of Iraq and the Levant threat has dragged his approval numbers lower than the nadir of President Bush in 2006.

In fact, Obama’s handling of ISIL has begun to sag in his own party, endangering vulnerable Senate Democratic incumbents.

Chuck Todd appeared on his old show Wednesday to preview Obama’s address to the nation and point out that with his underwater numbers, the Democratic party is at a tipping point.

Here’s the video referenced in the report.

What’s with the constant confounding making this all about Syria? We should not be “partnering” with, i.e. funding and arming, Muslim revolutionaries against their own sovereign government.

Who are these 42% that have a positive view of this divisive, anti-American, compulsively-lying, Marxist buffoon?

…and in my opinion that 42% is still a lie. Hey the media has lied on everything about this administration and their man – why would they tell truth now?

“In what was once viewed as a strength,. . .” By whom? Those who proclaimed him the greatest president two days after he took this office (with emphasis on “took”)?

This one’s for Rags…

And Kerry (who served in Vietnam) tells us today we are “NOT at war with ISIS”.

Anybody who knows Pres. ScamWOW already knew that.

Note that a 13% more of the electorate has an opinion on Obama than did on Bush. My guess is because of the divisive rhetoric that has exploded in recent years. Politicians now don’t even bother to refute each other’s points, they just try to vilify each other by telling half-truths.

Obama’s policical strategy was/is: Ask for everything you want and if you don’t get it blame the opposition. I’m interested to see what happens if Reps eventually control Congress and the White House. Will they smash through issues like border security, repeal Obamacare, simplified tax code, curb social security and medicare spending, etc?

Can you imagine the media response?

I can’t see that “the mighty” have fallen at all.

Most of the rest of us have, and have yet to hit bottom. When that happens it’s gonna seriously hurt.