Pelosi: America “not at war” with ISIS

Pelosi: America “not at war” with ISIS

Is she for real? 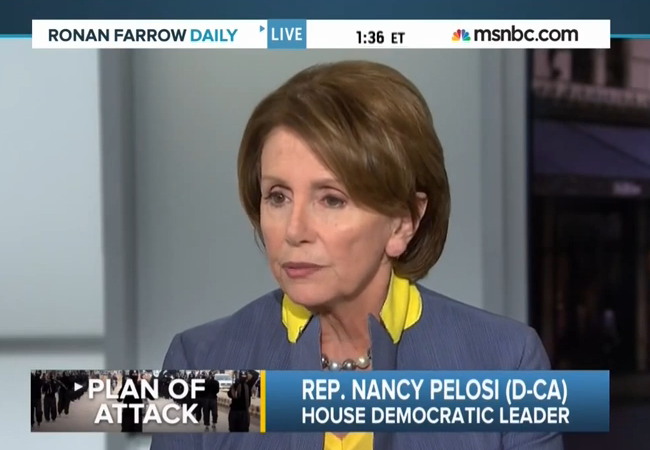 Do you know what keeps Nancy Pelosi up at night? It isn’t ISIS.

Three days ago, she insisted that if Republicans take control of the Senate it would bring about the end of civilization. Now, she’s claiming that America isn’t at war with the Islamic State.

Nancy Pelosi: We Are Not At War With ISIL

If you have been following the ISIL crisis, you know our government officials have not quite decided if we are “at war” with the Islamic extremists or not.

House Minority Leader Nancy Pelosi (D-CA) affirmed today that the U.S. is not at war with ISIL, though she called the matter “deadly serious.”

“We have initiated hostilities against ISIS, that’s for sure,” Pelosi told MSNBC’s Ronan Farrow. “[War] would require a declaration of war by the Congress of the United States.”

Pelosi echoed the Obama administration’s assurance that no U.S. troops would fight the extremists in a combat mission. She instead expressed support for arming and training “responsible” Syrian rebels.

Here she is on Ronan Farrow’s MSNBC news program:

Perhaps Pelosi didn’t get the memo from John Kerry, who is now saying that yes, we are at war with ISIS.

Funny how she had no problem saying that the GOP’s supposed war on women was real.

The combination of meanness and senescence has made Pelosi especially ridiculous.

She instead expressed support for arming and training “responsible” Syrian rebels.

And I express my support for “responsible” Democrat Party leaders.

Funny how she had no problem saying that the GOP’s supposed war on women was real.

She should watch the new The View if she wants to see war on women….http://www.breitbart.com/Big-Hollywood/2014/09/15/War-on-Women-The-View-Promotes-Violence-Against-Sarah-Palin

Pelosi: GOP ‘at war with its own government’
http://dailycaller.com/2013/03/14/pelosi-gop-at-war-with-its-own-government-video/

I was talking with a politically active woman (Democrat) within a year after Nancy Pelosi became Speaker of the House. She admitted in a low, angry voice that Nancy Pelosi was “a great disappointment.” However, she was never dislodged, either from the Speakership or from her high public office.

Nancy Pelosi is one reason why I am not voting for any Democrats in at least the next two elections. It is well past time to clean out that party.

Just as ‘Barack Hussein Obama’ (or whoever he really is) is gun salesman of the century, Crazy Nancy Pelosi is the conservative vote machine of the century.

GOP has their War on Women, and will cause the end of civilization if they take charge.

And the chocolate ration has been increased from 30 grams to 20 grams. Prosperity!

Deep within the bowels of the Ministry Of Truth, Winston Smith receives an order to write Archer out of history and out of existence.

Next thing to a war