Iraq: a Problem of Mixed Messages

Iraq: a Problem of Mixed Messages

“Chase them to the Gates of Hell?” 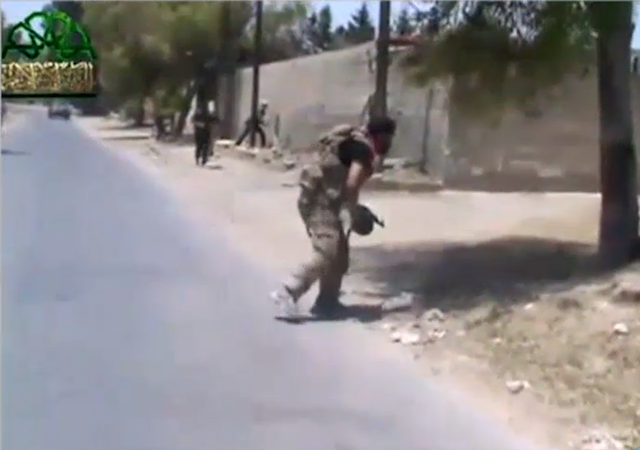 Our “boots on the ground” troops in Iraq are receiving mixed messages, and it’s causing more than just a morale problem.

Officials overseas are calling out the Obama Administration on their jumbled approach to current actions being taken against the Islamic State in Iraq. The current mission against ISIS calls for diplomatic protection in addition to airborne and humanitarian missions, and military leadership can’t get a clear read on just how far President Obama is willing to go to destroy (or shrink, he can’t decide) Islamic extremism.

Biden on Wednesday delivered what was probably the toughest statement to date from the administration, declaring, after another U.S. journalist was beheaded by the Islamic State, “we will follow them to the gates of Hell until they are brought to justice.”

But his tough talk was at odds with a message delivered earlier in the day by President Obama, who said that while his administration’s goal is to “destroy” ISIS — it also is to “shrink” it to a “manageable problem.”

Amid the mixed messages, a source in contact with special operators in Iraq told Fox News that “frustration and confusion reign” among Americans on the ground there.

The source relayed the complaint of an unnamed special operator: “Chase them to the Gates of Hell? How the [f—] are we going to do that when we can’t even leave the front gate of our base!?”

President Obama recently agreed to send 350 additional troops to Baghdad to protect our diplomatic mission, bringing our troop total on the ground to just over 1200. According to the White House, those troops were meant to relieve previously deployed units while “providing a more robust, sustainable security force for our personnel and facilities in Baghdad.”

Now, it seems even the President and the Vice President can’t get their messaging straight.

At a NATO conference in Wales this week, world leaders discussed the best approaches to combating aggression in both the Middle East and eastern Europe.

U.S. President Barack Obama and British Prime Minister David Cameron have been pressing their NATO counterparts to join a coalition of nations that could degrade militants from the Islamic State group.

The threat posed by the Islamic State overshadowed some of the NATO summit’s official agenda. Yet the leaders still spent a considerable amount of their time discussing the crisis in Ukraine, with Ukrainian President Petro Poroshenko taking on a high-profile role during the talks.

On the sidelines of the summit, Cameron and Obama were also meeting with their counterparts to rally support for a mission to confront the Islamic State through military might, diplomatic efforts and economic penalties. Both leaders had meetings planned Friday with Turkish President Recep Tayyip Erdogan, a key regional player whose support would be crucial to defeating the militants.

[NATO Secretary General Anders Fogh] Rasmussen suggested that NATO was unlikely to take imminent military action against the militants in Iraq, but said he could foresee the alliance engaging in a “defense capacity-building mission” there.

The confusion has also spread to Capitol Hill, where lawmakers have been largely left in a lurch when it comes to explaining to constituents and the media exactly what steps Congress plans to take to support humanitarian and national security missions overseas.

“The president seems to be a definite maybe,” said Representative Jason Chaffetz.

Jonah Goldberg has a good piece up about the awful pretext that Pres. ScamWOW has showed all his years: “I’m only interested in what works. I am not ideological”. It was and is, of course, a total lie.

Even Ball-less Bill Clinton was LESS ideological, and could be driven, at least, to what works.

There is an old lesson taught in the Bible…something about an “uncertain trumpet”. Nobody will rally to it.

Clinton’s only real core ideology – truly and sincerely held belief – was that he should be President. And make a buck from the gig. Beyond that, everything was negotiable if you understood he had to play to the geeks enough to keep the old lady happy.

Obama’s just a clown. Slick, smooth with the patter of a con artist down to the expensive tastes, but in reality just a clown. He’s failed to accomplish anything, ever.

Mystery transfer to Columbia – 3rd year requires higher standards than freshman admissions because it is into a major program, yet Obama claimed he was a “lackluster at best” student at Occidental. Even honors grads from Columbia aren’t a cinch for Harvard Law, yet Obama got in without honors.

He was elected President (Editor) of Law Review on the 53rd ballot as the only remaining member who hadn’t alienated a majority of the others, principally because he had not said a word for or against anyone in the first 52 ballot debates. And became the only one in history to not publish a single signed scholarly article of his own during his tenure. Or ever.

He did, as community organizer in Chicago, incite public housing residents to force the city to seal the asbestos in their buildings. After that he was the lawyer for ACORN, served on the board of the Annenberg Challenge (a failure), and got the lecturer gig at Chicago Law somehow.

Then as state senator he voted “present” over 130 times, but had his name put on bills he had no part in drafting to build a resume for the US Senate – where he did nothing, was late to the committee meetings and hearings he managed to attend, and set absenteeism records for Senators not hospitalized.

It was all there to see in 2008. Why is anyone surprised at the crumbling failure now?

“To the Gates of Hell! (Unless those sneaky so-and-so’s draw a red line in the sand – then we’ll have to turn back.)”

What are we supposed to “chase them” WITH?

Downsizing the military, throwing combat vets out because they’ve got tattoos?

SURE we’ll “chase them.” Precisely like we “chased” the guys who slaughtered us in Benghazi. And how’s that working out?

We’ll stand on the balcony and fire both barrels of a shotgun into the air. That’ll scare them back to the Gates of Hell.

They did not say what they would do when they caught them. I believe that they will be read their Miranda rights, be provided with free health care and halal meals until they can be traded for a deserter.