Is Obama’s ISIS Strategy Made to Fail?

Is Obama’s ISIS Strategy Made to Fail?

Brit Hume: “So he came up with a strategy for ISIS’s eventual defeat, which is designed…to fail slowly…” 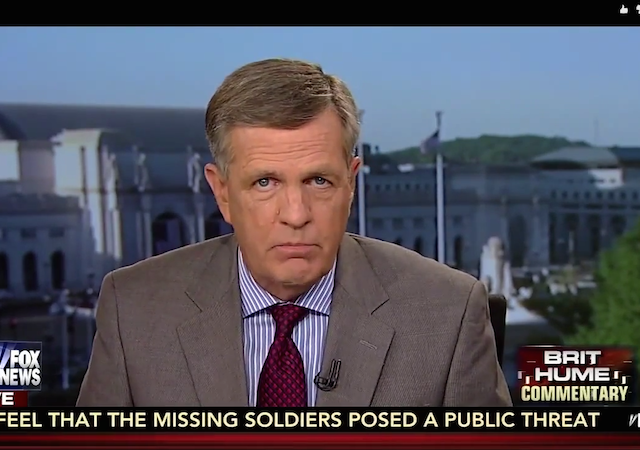 President Obama has come under fire not only from voters but from Congressmen and members of the media over his strategy—or lack thereof—to roll back ISIS in the Middle East.

The U.S. has already escalated involvement in the region by initiating air strikes as part of a joint U.S.-Arab offensive against ISIS strongholds:

American warplanes also carried out eight airstrikes to disrupt what the military described as “imminent attack plotting against the United States and Western interests” by a network of al-Qaida veterans “with significant explosives skills,” said Army Gen. Martin Dempsey, chairman of the Joint Chiefs of Staff.

If what Dempsey says is true (and as blunt as he has been in his testimony and media hits, I tend to trust the veracity of what he’s saying,) these missions are a necessary part of protecting American interests both in the Middle East and on U.S. soil. What isn’t clear yet is how far Barack Obama will take these missions; he’s declared time and again that he won’t put boots back on the ground, but military officials and analysts are already asking questions about the possibility of doing so if airstrikes aren’t sufficient to eradicate the ISIS network.

One theory that pundits and academics are floating is troubling, but what’s more troubling than the theory itself is its plausibility. Brit Hume laid it out on Monday’s edition of Special Report with Bret Baier:

There is an intellectually respectable case to be made that the United States should do nothing, or next to nothing, to destroy the terrorist force known as ISIS. It goes something like this:

I don’t buy this whole argument, but I sense that President Obama does, and would have preferred to take no action against ISIS beyond some air strikes in Iraq. But he felt his hand was forced by the public’s outrage and alarm over those videotaped beheadings. So he came up with a strategy for ISIS’s eventual defeat, which is designed not to succeed so much as to fail slowly in a mission he doubts should even be undertaken.

We know that Obama doesn’t want to be in the Middle East because he ignored the best advice of his military advisers when he pulled our troops out of Iraq. He decided unilaterally that leaving a “footprint” in the region was an unacceptable option. He chose to support the Assad regime in Syria, which escalated tension in the region.

More importantly, he knows that right now the only thing saving his foreign policy approval rating from bottoming out is the current show of force against ISIS, and that he needs to drag this out until something happens that will allow Democrats to reclaim the “strength through diplomacy” narrative that recent events have torn to pieces. All he has to do to make this happen is the bare minimum; and even if the situation devolves, he can still claim that Bush (BUSH! BUSH!) left him with the impossible task of gluing the Middle East back together.

For this president, achieving the bare minimum at the expense of our international presence may be the only strategy he’s capable of.

You can check out the full transcript here, via Truth Revolt.

During World War 2, the air force kept insisting that they could win the war with no troops on the ground. It didn’t work then and it won’t work now.

“Bomber” Harris made that point over and over, and after Dresden even he admitted that it had failed. Bombing is a legitimate adjunct to other resources but the most effective of those others has been, is now, and will continue to be boots on the ground. We learned that during the Phillipine insurection; learned it so thoroughly that the Army wrote a book on how to fight insurgents and win!

A century later those lessons and that book were forgotten by the Pentagon. Only a few “radical” officers like Jim Gant remembered and look what happened to him. Weirdly, the tactics in the book, the ones Jim Gant was using, are actually taught at West Point!

Someone needs to sit on The Annointed One’s chest and bring him to reality – if that is even possible – and make him understand we cannot defeat ANYONE without those boots on the ground. It’s called “war”.

actually an air war on Japan seemed to bring capitulation in the last stages. Correct it was not air alone, but air at last. and a special kind of air attack.

I said two weeks ago, right here on LI, that Obama had no intention of accomplishing anything beyond extending the ISIS thing past the midterms.

Obama, late November: “We are not receiving the assistance we needed and were promised in the region and it becomes clear that air strikes alone will not turn the tide. However, I refuse to commit American ground troops to the mission. Therefore, we shall no longer bear a leadership role in the Syrian/ISIS conflict.”

Midterms over, neatly blamed somebody else for my failure, pulled off US forces, pivoted to domestic issues: immigration. Check, check, check.

Obama wants to aid the jihad while appearing to want to stop it, so he orders ineffectual airstrikes while simultaneously arming a bunch of jihad groups.

Exactly. EVERYTHING he has done for the past six years has weakened America and strengthened Islamists. He’s on the other side and is working hard to help them win.

We have what is, at a minimum, a leftist Laurel and Hardy dumbass couple — and possibly two traitors, and one transvestite — living in the White House. And we have what are corrupt dumbass cowards running the GOP and ‘advising’ them. We also have a cadre of ‘conservative’ talking heads on TV are 6 years behind the curve.

‘Barack Hussein Obama’ (or whoever he really is) and the other demented heads of the democrat party are out to destroy our way of life and the way of life of all free Western nations. Of COURSE Ebola Boy is shilling for ISIS.

I’m curious about (among other things) this strategy to “roll back” ISIS/ISIL. Isn’t a “roll back” a voluntary retraction, initiated from within the organization?

For example, when Walmart “rolls back” its prices, that’s a decision Walmart corporate makes voluntarily, not under pressure from a government, foreign or domestic. How connected is 0bama to ISIS/ISIL, that he can claim he’ll “roll back” their operations and capability?

Or is this just a rebranding of an unpleasant subject under a different name, the way “fighting insurgent combatants” was renamed “kinetic ground operations”?

Obama and Co will allow sufficient time so that ISIS/ISIL can be seen to be governing a large swath of what they have taken. Then they will recognize the area as a new country.

Refugees in Turkey are already reportedly saying that ISIS/ISIL is providing services and governing, albeit harshly.

I doubt that civil rights abuse according to Western standards will be an impediment to recognition. After all, the administration is willing to negotiate with Iran, the Taliban, and all sorts of Islamic riff raff.

I wouldn’t be surprised to find that soon the administration will set up a back channel to ISIS/ISIL to advise them to cool it with the Western be-headings until after the country is recognized.

I doubt the administration will be bothered over recognizing a Caliphate. It is a tried and true form of government. The Ottoman Caliphate existed for over 600 years before Kemal Ataturk dissolved it in 1922.