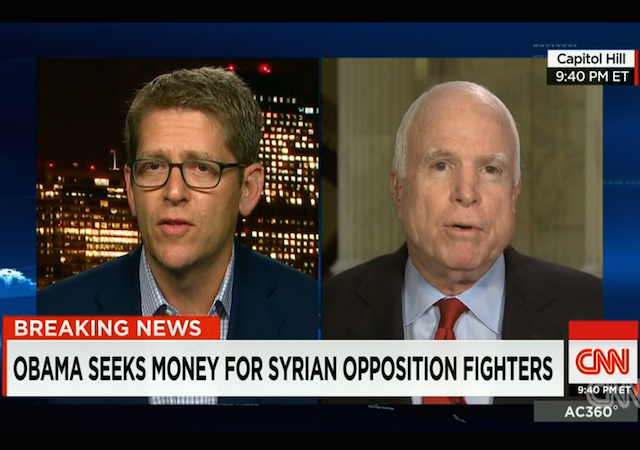 Barack Obama’s address to the nation regarding the threat of ISIS was met with both cautious optimism and unbridled mockery from pundits on both sides of the aisle.

No one was more optimistic than CNN’s latest hire, former Obama Administration press secretary Jay Carney. Unfortunately for Carney, however, CNN had also invited Senator John McCain (R-AZ), who was more than a little irritated at the media’s willingness to overlook the fact that Obama chose to ignore the possibility of the current crisis when he decided to pull the occupying force out of Iraq.

Facts are stubborn things, Mr. Carney. His entire national security team, including his Secretary of State, said we want to arm and train and equip these people and he made the unilateral decision to turn them down. And the fact he didn’t leave a residual force in Iraq, overruling all of his military advisers, is the reason we’re facing ISIS today. So the facts are stubborn things in history, and people ought to know them. And now the president is saying basically that we are going to take certain actions, which I would favor. But to say that America is safer, and that the situation is very much like Yemen and Somalia shows me that the President really doesn’t have a grasp for how serious the threat of ISIS is.

It is a mis – basically a whitewash of history to suggest that there weren’t periods of enormous chaos and fighting and bloodshed in Iraq when there were tens of thousands of Americans troops on the ground. That is a fact. And that was true in 2004, it was true in 2007. And it was true even when we had the highest number of U.S. troops on the ground. We cannot – the United States of America – ask our military to be a permanent occupying force in a country like Iraq.

The most important takeaway from this exchange is that Senator McCain—though he may have thrown up in his mouth as he did it—was honest about the fact that he supports the current strategy as laid out by the President. What he doesn’t support is the assertion that this current crisis is somehow one more in a series of unfortunate diplomatic events in the Middle East.

McCain has seen the writing on the wall—the “no strategy” strategy, the mixed messages—and he understands as well as anyone can at this point how crucial it is for the Administration to step up and get it right this time.

Senator McCain’s assertion that a residual force in Iraq could have tempered the threat of ISIS comes from a place of experience, not of brash partisanship.

Is it just me, or does the Carnival Barker Look like he’s started
taking some heavy anti-depressants in Oder to get through the day? Seriously, in the freeze-photo, he looks like he’s drugged.

I’ve got to stop trying to post from my stupid I-Phone…. Should be “order” to get through the day.

No, you’re right. Jay Carney looks pretty haggard for someone who supposedly has been freed up from the burden of being a fawning sycophant of this president as his press secretary. Change didn’t do him any good. Kind of surprised, thought he’d be out there rallying his fellow lefties…

I was just thinking the same thing.

Carney is such a tool.

I know Carney, and he’s an earnest young man … or at least he was. A Yalie, you know.

That said, his ego – coupled with a better-than-average brain – has made him an ideologue. He has bought into the president’s schtick to such a profound degree that he is simply UNABLE to accept the fact that he is wrong.

That’s the problem with guys of Carney’s ilk. They are on such an ego trip that they can’t ever accept that they just might be wrong … about anything. And since they never worked in business – where being wrong can get you fired – they just keep on keepin’ on.

Carney’s biggest issue is that he is longer standing at a podium where softball questions and even the occasional tough question, get answered without a response from an informed individual. I’m not sure that will continue to happen at CNN either but at least there is a chance. Ah, what am I saying, there is no chance they will continue to have informed debate. HAHAHA

This is like a fight between Dracula and the wolf man. I sincerely want both to lose.

Since 9/11 it’s the War on Terror
One “false flag” attack so called by error
Blair, Bush and Israel had a Pact in store
Their next surprise is knocking at your door
A hidden vile Idea from those who want “more”
will use you and your Belief for the next World War
As “chosen people” gain while Humankind loses
Greed wins not by the swords but by the words of Moses
Daring is to tell you when, better then to tell you rhymes
could not side with either one to get ready for our times
to look beyond and past today to seek for a solution
one only hope is there for you and spells Wavevolution

All that is happening in our days is the prelude to enormous changes but even before discussing in regard of the possible remedy one must be clear about how we came to this point recognizing both physiognomy and origin of the threat.

Since George H. Bush was CIA director, the US secret State agencies had played a double role to finally get to where we are today when every person is constantly monitored by NSA and other agencies not to report the information to the US Government but to feed with all data the embryo of a new superpower still kept hidden.

In brief, here is how it came to possess all means and to know everything of everyone.
In 1988 the ex CIA director was elected president although this was a US president like no other. His attention quickly turned to Saudi Arabia and Kuwait from where he personally benefited immensely in exchange for the protection of those tyrants and their oil while in the United States instead the president observed his son, Neil, to be the author of the largest robbery of its time, the “Savings and Loans” scandal. After a few years, the next largest robbery in history was Enron that financed the electoral campaign for his other son, George. Once he also became president, the son plotted the most infamous attack on US soil, 9/11, to begin the widest monitoring program ever conceived and to consolidate for 8 years the interest of one family above all.

In our days, a group of Zionists, like a hidden parallel government, with George Bush still today at the head of secret services in the US, UK and Israel, is the destabilizing force behind most terror events and with classified information at disposal and a private army is plotting what now would seem unthinkable to many. The spokesman for this group in the US Congress is John Mc Cain who reports the given orders weighing on the US administration.

A World War and chaos everywhere have already been planned so that desperate people will soon invoke a New World Order without even knowing what that is.

When Jeb Bush will be the US president, the next War will be inevitable and also come by surprise.

There is one Solution.

Is your solution a final one?

I checked out the site. It’s a one man show, mixing conspiracy theories, religion, and incredibly bad science to create the ‘solution’, a wave evolution of matter into energy, which he proves scientifically by first asking you forget the laws of science.

Whether intentional or not, it has all the foundational bits of a cult – page after page of mystical gobblety-gook, lots of sciency-sounding stuff that falls apart under the least scrutiny, but needy loners with only basic science would eat it up, complete with an imaginary problem for which our boy Wavetorre is the only owner of the Solution, capitalized because this serious shit, man.

That’s what I thought… gibberish.

Oh look! A baby truther! In the wild!

It looks like Carney is still on the White House payroll. You’d think he’d want to start rehabilitating his image.
What’s he going to do in 2 years?

Ideological allegiances are transferrable. He awaits Hillary or Elizabeth.