Even Democrats are abandoning Obama

Even Democrats are abandoning Obama

Reminders of Obama’s policies could be toxic for dems in battleground states. 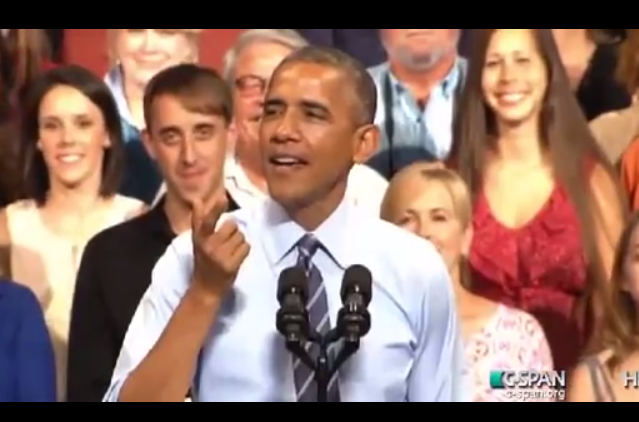 It seems like even the most staunch democrats are waking up to the realities of Obama’s America—especially the political realities.

Republicans need to capture 5 of the 6 most competitive Senate seats in the 2014 midterms to regain control of the chamber and end Majority Leader Harry Reid’s reign of terror against Republican legislation. This means unseating at least three incumbent Democrats in states that Mitt Romney swept in 2012, and national democrats are nervous at the prospect.

Why? Because Barack Obama is a toxic commodity.

Six years ago, Obama’s massive campaign organization helped to sweep several Senate Democrats, now the most endangered, into office with his appeal to unite political factions.

Across the country, from Alaska and Colorado, to Louisiana and North Carolina, Republicans are citing how often the Democratic incumbent sided with the White House on votes in Congress. It’s a tactic Democrats used to great effect in 2006 when they wrestled back control of the Senate by linking every incumbent to President George W. Bush, who was even more unpopular than Obama.

“He’s going to be an anchor on each one of these Democrats all the way through,” said Guy Harrison, a media consultant for the Republican Senate nominees in Arkansas, Colorado and North Carolina. “They’re trying to grasp every life preserver they can, but the anchor of Obama is still going to pull them down.”

In key battleground states like North Carolina, where Senator Kay Hagan is in a knock down/drag out to keep her seat, Barack Obama’s presence seems to have served as nothing more than a springboard for Hagan’s attacks against the current Administration’s handling of veterans’ issues:

When Obama arrived in North Carolina on Tuesday to speak at the American Legion’s annual meeting, Democratic Sen. Kay Hagan — along with Republican Sen. Richard Burr — greeted him on the tarmac and gave him a kiss on the cheek.

But by the time Air Force One touched down in Charlotte, she had already pulled up the welcome mat, attacking his management of the Department of Veterans Affairs as a means of differentiate herself from the president. In prepared remarks for her own speech to the convention released ahead of the president’s visit — though she didn’t speak until after him — she added that the administration “has a long road ahead to restore the faith and trust of our veterans.”

Domestic politics are sure to take a front seat in the policy debate as we move closer to November, but even more striking is the willingness of Democrats to turn a volatile foreign policy problem into a major talking point against Obama, who up until recently was able to sidestep major issues overseas by taking a back-burner approach to international optics. But with prominent politicians like Dianne Feinstein not hesitating to throw his Administration under the bus over its “no strategy strategy” against ISIS, for example, it’s clear that Democrats have become painfully aware of the need to capitalize on every opportunity to distance themselves from Obama, even on issues that tend not to move voters.


The president, in an interview published early this year by The New Yorker, appeared to minimize Islamic State by comparing the group to a junior varsity basketball team. The White House later said he was speaking about a different threat posed by a range of extremists across the world.

Feinstein said Sunday that the basketball analogy was wrong.

“I think it’s a major varsity team,” she said while declining to say whether Obama acknowledging a lack of a strategy projected weakness from the White House.

“I think I’ve learned one thing about this president, and that is he’s very cautious,” she said. “Maybe in this instance, [he’s] too cautious. I do know that the military, I know that the State Department, I know that others have been putting plans together. And so hopefully, those plans will coalesce into a strategy.”

Feinstein’s nod to the State Department is clearly a signal to other Democrats, and to the media, that there is still one among them who has the wherewithal to make it through a press conference without suggesting to the world that America is shrugging at the prospect of the caliphate. However, Republicans have anticipated this move and are already taking steps to discredit former Secretary of State and probable presidential candidate Hillary Clinton before she gets a chance to schedule her campaign kickoff party.

Although Democrats used the same tactics against Republican candidates toward the tail end of George W. Bush’s tenure as President, the fact that liberal candidates are distancing themselves from the President with more than two years to go in his Administration suggests a deeper concern regarding their ability to hold on to the Senate—and eventually, the White House.

With embattled senators in swing states refusing to accept President Obama’s formidable fundraising abilities, and key defense and military officials publicly countering White House talking points, it’s clear to me that democrats grow pale at the prospect of mopping up the fallout of the Obama Administration long after the President leaves office in 2017.

There is one huge difference between the 2008 Democrats attacking Bush and the 2014 Republicans sorta attacking Obama. In 2008 Democrats enjoyed a multi-billion dollar smear machine called the media that relentlessly attacked Republicans without subjecting Democrats to the same scrutiny. There is nothing like that aiding Republicans in 2014.

But having the media against you should not necessarily spell defeat for the GOP in any given election year. To defeat the Obama Democrats in 2014 the Republican Senate challengers – a mostly weak, flawed field of Establishment backbenchers – cannot just deride King Putt’s golfing habits, or use Romney’s Obama-is-a-nice-guy-who-is-over-his-head shtick, or even moan about ISIS and Putin the way Democrats did about the Iraq war. Obama is not a nice guy: he is the latest in a series of corrupt out-of-touch leaders whose evil governing philosophy of liberalism is destroying the country at home while empowering our enemies abroad.

So far I don’t see much of an aggressive GOP campaign, which is why many GOP Senate candidates are tied with or even running behind Democrat incumbents they should be wiping out. There is time to reverse this, but I fear the same error the lefty GOP Establishment made in 2012 (cocky overconfidence fueled by some dubious early polling) is being repeated.

PersonFromPorlock in reply to Recovering Lutheran. | September 1, 2014 at 2:25 pm

What a strange combination of words!

Recovering Lutheran in reply to PersonFromPorlock. | September 1, 2014 at 2:33 pm

Actually, the GOP Establishment is pretty aggressive when running against the Tea Party. In fact, “scorched earth” is a pretty accurate description of the campaigns the Establishment waged in normally reliable red states like Mississippi, Alaska, and North Carolina.

Karl Roves’ plan in NC is to have Thom Tillis run to the left of Kay Hagan. Amazing, but true: http://www.breitbart.com/Big-Government/2014/08/30/KARL-ROVES-PAC-TRYING-TO-WIN-ARKANSAS-AND-NORTH-CAROLINA-BY-GOING-LEFT-OF-PRYOR-HAGAN

No, Feinstein. He is not “cautious”. He is cowardly and lazy.

Fortunately for conservatives and, to an extent, our nation.

I shudder to think what he would do if he was as energetic and stupidly brave as Carter.

Barack Obama will not be running for office in the next presidential election, and the Democrats will be sure to point that out.

The Republicans can win, if they tell the simple truth, that the Democratic Party at the national level created a cult of personality around an inexperienced candidate who never really grew in office, like George Bush and Bill Clinton, both of whom were former governors with real, relevant qualifications.

Are we supposed to trust a national party that has demonstrated its willingness to actually run a yellow dog for high public office, and claim it is a genius? And what was the result? An enormous redistribution of wealth to the friends and families of the Democratic Party at the national level, and impoverishment our young people, and destruction of nearly the entire black middle class! The Democrats need some time out to clean house, and re-think their policies. It’s time to send them all home.

Meanwhile, the Republican party has been busy applying good economic policies in the various states, some with great success. The Republican economic polices are drawn from real economic theory and real American experience. We can do it better.

Everything that Sen. Dianne Feinstein said about ISIS applies to the Obama/Holder admin. – everything.

“No strategy” is no different than IRS stonewalling.

Like the eboli bacteria, we must rid ourselves of ISIS. We must close our borders NOW and no matter how many Hispanics Rep. Luis V. Gutiérrez (D-IL) wants to placate. Anti-American diseases are quickly spreading throughout the country.

It appears that none of the illegal immigrants seem to have the will or courage to displace their own dictators/drug dealers. (Have you noticed that cultures that appease allow drugs to command).

This is Legal Insurrection. It is time to disown and displace radical Islam, Howard Zinn and Noam Chomsky with not just politics but with Judeo-Christian values. (atheists, being nihilists can borrow our values to fill the void)

A nice post like that and then you call me a nihilist, one who needs to borrow values at that, having none of my own apparently. That’s a finely drawn assessment from someone who knows very little about me.

But ARE his fundraising abilities that formidable these days?

Isis isn’t the great threat to America: the American morons who enabled them are.