Rick Perry refuses to be derailed by Texas Democrats

Rick Perry refuses to be derailed by Texas Democrats

The Governor of Texas won’t let a little thing like an indictment stop him. 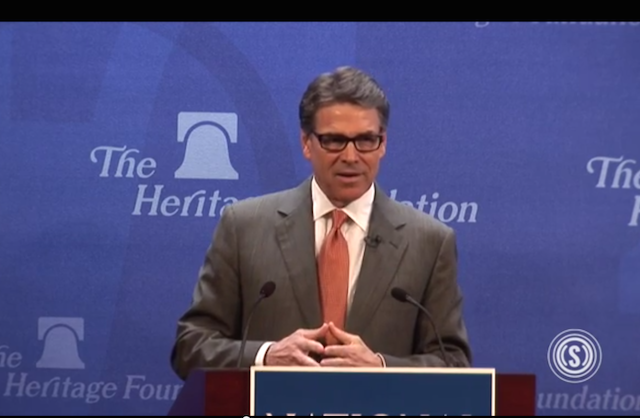 Texas democrats may be keeping busy wallowing in the shallow victory of the recent indictment of Governor Rick Perry, Rick Perry himself is doing what he does best—his job.

Today, Governor Perry gave a speech at the Heritage Foundation in Washington D.C. detailing the dangers inherent in Barack Obama’s tacit open borders immigration policy. The apparent beheading of U.S journalist James Foley by ISIS terrorists in Syria has energized the debate over whether or not Islamic terrorists could use America’s porous southern border as an an easy access point.

Via the New York Times:

While Mr. Perry said that there was “no clear evidence” recruits from terrorist organizations had entered the United States illegally, he pointed to the number of violent crimes committed in recent years by illegal immigrants.

“I think there is the obvious, great concern that — because of the condition of the border from the standpoint of not being secure and us not knowing who is penetrating across — that individuals from ISIS or other terrorist states could be,” he said during a speech at the Heritage Foundation.

According to CNN, Perry didn’t spend much time addressing his legal problems, and instead focused solely on the crisis down at the border:

Even during his brief remarks in Washington, Perry seemed to be focused mainly on the idea of one day serving as commander-in-chief: following a brief mention of the case against him in his home state, the Governor focused his attention on the crisis at the border, calling it a threat to national security. Perry said there should be no conversation about immigration reform, “until the border is secure.”

Whether or not ISIS could enter the United States through Mexico is still up for debate, but what’s important about what Perry is doing here is that he’s not allowing fellow Republicans or the media to control his own narrative. He has owned the indictment, the booking, the mug shot, and the democrats’ own strategy, and now he’s moved on.

Perry is scheduled to make appearances in New Hampshire and South Carolina later this month, and as of the writing of this article, has announced no plans to change his schedule. This is smart on the part of Team Perry—if he allows himself to be derailed by an indictment he himself has claimed is bogus, the narrative will immediately switch to how his 2012 presidential campaign derailed spectacularly, and all chances at a run for 2016 will be squashed permanently.

Texas is standing firmly behind her Governor, and Perry is acknowledging that by bringing his policy concerns directly to the activists and analysts who will help him draft good policy if he wins the nod in 2016.

Ah, yes. The “Killer Bees”…or cucarachas as I called them. Then the “Flee Baggers” up in Wish-consin.

Deemocrats HATE democracy. You can tell by how they act.

Yeah, unfortunately one of them Lloyd Dogget has managed to milk that notoriety all the way to Congress. He has been a complete pander-bear.

Well, who, besides maybe the DA who had him indicted, thought it would stop him? What is he supposed to do, cower in his office until the truth comes out?

I could have told you “not bloody likely” and that was before I saw his speech in response.

If he lets this partisan persecution curtail him in any way, then he’d never make it through a presidential election.

If we were living 150 years ago I believe that prosecutor would be getting Perry’s ‘coyote treatment.’ Too bad we’re not.

Unlike Alaska, Texas has no law that forces the governor to defend against this with his own money. They can’t bankrupt the Perry family like they could the Palin family.

I am sure there are some Democrats calling him “shameless” right now, but we want somebody who can deal with the nonsense and keep a sense of humor.

Islamo-fascist terrorism coming over the open southern border is most definitely a threat. Unfortunately, it’s just abstract enough that the typical prog drone just can’t get his/her vapid mind around it. But rest assured if/when a terror attack hits during the term of the next (R) administration, the prog drone army will be out in force decrying his/her ‘failure’ no matter if there is video evidence of the culprits coming across the border and being handed a ‘Bienvinidos’ package and an Obama phone by Barry Soetero himself.

But my question is this… we know for a fact that there have been thousands of crimes including murders and rapes of women committed by illegal immigrants who have been previously caught and released by the Soetero administration… so why do Barry & Co hate women so much? Do they support rape and murder of women? It sure seems that way.

It’s the best thing that could happen to him. For the moment, it totally took other conservative hero Ted Cruz off the radar.

he had to surrender his concealed permit now due to being under indictment.
so…punished before any trial.

The first time Texas GimmeThats fled the state was in 2003, to kill a quorum vote over redistricting. They went to Ardmore, Oklahoma. That was so embarrassing that the next time they decamped to a more salubrious location—Albuquerque. Willie Nelson sent each one of them a case of whiskey. The GimmeThats whine all day and promise to turn Texas blue, but can’t even find a decent candidate to run for governor.

A state district judge in Austin said Thursday that she intends to protect members of the grand jury that indicted Gov. Rick Perry from any threats — veiled or direct — from the governor or anyone else.

Judge Julie Kocurek of the 390th District Court, a Democrat, said Perry’s Saturday statement, issued a day after the indictment, could be construed as a threat and possible violation of the law. Kocurek, as the administrative presiding judge of all criminal courts in the county, said that “no one is above the law,” and the public needs to know that grand jurors are legally protected from any threat.
“I have a duty to make sure that our members of the grand jury are protected,” Kocurek said. “I am defending the integrity of our grand jury system.”

The judge said that Perry might have made a veiled threat when he said: “I am confident we will ultimately prevail, that this farce of a prosecution will be revealed for what it is, and that those responsible will be held to account.”
The only people that Perry could be referring to as being accountable are the grand jurors, judge and prosecutor, Kocurek said.

The Texas Penal Code that outlaws obstruction and retaliation says that anyone who “intentionally or knowingly harms or threatens to harm” a grand juror faces a second degree felony, which is punishable by up to 20 years in prison.

Gee, I wonder if this judge is a Democrat. Her threat may be a trial balloon for additional charges against Gov. Perry.

Well, it isn’t retaliation if the person receiving the adverse action is actually culpable. Retaliation requires that the wrongdoing be elsewhere than the target.

Otherwise, all criminal prosecutions would be retaliations.

This judge has no business issuing commentary. She should report herself to the judicial complaint board.

It occurs to me that Perry is the last battle for the heart and soul of Texas. If he vanquishes the donkeys/leftists, Texas will probably be red for two generations.