Warren finds refuge in the present tense, as Hillary’s weaknesses are exposed by her disastrous book rollout. 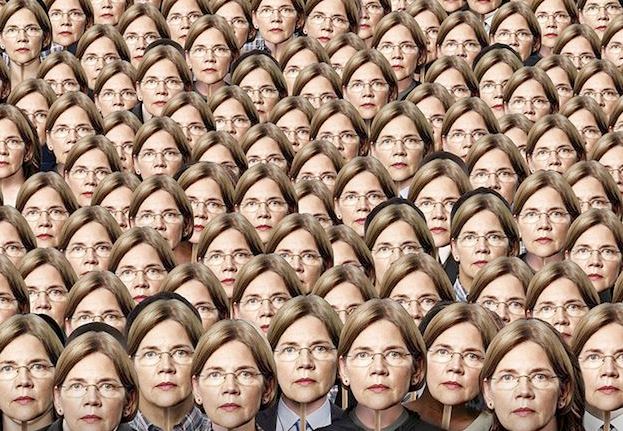 I told you so.  Elizabeth Warren’s repeated supposed refusals to run for President always were framed in the present tense: I am not running for President.

That, of course, technically was correct.  I don’t think anyone of note “is” running for President yet, but many are seriously considering it and likely will run.

Nothing makes Warren’s word games more clear than her interview with (my law school classmate) Ruth Marcus of The Washington Post:

The Massachusetts Democrat insists that she’s not running for president, and there’s little reason to doubt her — although, interestingly, Warren sticks doggedly to the present tense to describe her intentions.

I asked Warren about this phrasing the other afternoon over iced tea mixed with lemonade at a restaurant near her Capitol Hill office. In these precincts, senator sightings are commonplace but, even here, Warren enjoys celebrity status; the manager promptly presented Warren with a copy of her memoir, “A Fighting Chance,” to sign.

“Because we can’t get so deeply involved in the politics of 2016 that we miss the importance of the issues in front of us today in July of 2014 and the 2014 election,” Warren replied, jumping slightly ahead of the calendar. “It is absolutely crucial to stay focused right now on this set of issues and that’s what I’m doing.”

Hmmm. “The point is not to try to create any ambiguity,” Warren added. “I am not running. I think I am being definitive.”

Considering how badly Hillary’s book rollout and interviews have gone, Hillary’s weaknesses as a candidate have been exposed, again.

The narrative of Hillary beating up on a child rape victim and laughing about it also doesn’t help.

If I were Elizabeth Warren, I’d stick to the present tense, too. Until it’s no longer needed.

When I ask about what she made of Clinton’s book-tour comment about being “dead broke” on leaving the White House, Warren paused for a full 19 seconds.

“Um, I was surprised,” she finally said. “But, families across this country are working so hard to hold together,” she added, veering into an unrelated disquisition about young people falling behind their parents and the false promise of trickle-down economics.

As to “Hard Choices,” Warren said, “I have the book. I just got it and I’m looking forward to reading it. I will be on an airplane tomorrow, and I will start.”

“Because we can’t get so deeply involved in the politics of 2016 that we miss the importance of the issues in front of us today in July of 2014 and the 2014 election,” Warren replied, jumping slightly ahead of the calendar. “It is absolutely crucial to stay focused right now on this set of issues and that’s what I’m doing.”

BUT, there is this out today…

“Bill got into it right away,” said a Clinton family friend. “He told Obama, ‘Hillary and I are gearing up for a run in 2016.’ He said Hillary would be ‘the most qualified, most experienced candidate, perhaps in history.’ His reference to Hillary’s experience made Obama wince, since it was clearly a shot at his lack of experience when he ran for president.

“And so Bill continued to talk about Hillary’s qualifications . . . and the coming campaign in 2016. But Barack didn’t bite. He changed the subject several times. Then suddenly, Barack said something that took Bill by complete surprise. He said, ‘You know, Michelle would make a great presidential candidate, too.’”

Remember, you heard it here first…

Actually, I read it here first:

I’ve been saying MoooOOOooochelle is the one to watch out for for several months.

“All this about a damn flag.”

No decent American would ever vote for her, so that tops her out at about 47% of the popular vote.

If she does run, I expect Prof. Jacobson to be the most sought after individual for interviews on talk radio.

“Elizabeth Warren refuses to say she “will not run” for President”

That’s surprising. Usually she has no problem telling outright lies. Must be some handler told her it’s better politics to play it cute.

But of course the “is not” could just be another BIG LIE told by a…..

Make no mistake, they are all running. It’s like waiting until the second trimester to announce a pregnancy, we are still in the first trimester. They are waiting until after the November elections to announce, so they can gauge the country’s sentiment and adjust their sales pitch accordingly.

Candidates like Hillary and Lieawatha who have national donor bases already can afford the luxury of waiting until sometime in 2007 to announce.

The problem Hillary presents for the Democrats is that except for the niche of well-heeled far leftists who support Warren, she has most of the big donors either locked up or staying neutral until she formally decides.

The potential other candidates like Malloy, Cuomo, or Bayh can’t even really test the waters as long as Big Mama is hogging the pool.

Gah – every time I see Ugly Lizzie’s mug, I think of American Gothic ~

Six years of listening to Zero’s clean, non-Negro dialect (except when he wants it) have been more than the average person can bear. Please don’t afflict us further with 4+ years of Ugly Lizzie or her SAB twin Billary ~

What ‘disastrous book rollout” are you talking about Jacobson?

“Sales figures provided by Nielsen Bookscan, which were first reported on by BuzzFeed, show that 85,721 physical books were sold during the week ending Sunday June 15. “Hard Choices” was released June 10.”

Plus she sold at least another 25k digital copies.

When you rely on the Weekly Standard for your data, and get too lazy and sloppy to check things objectively, this is the kind of partisan nonsense propaganda you end up posting here.

No wonder so few people take you seriously anymore.

Just one gaffe after another, coupled with anemic sales that are trending down, according to people in the business.

I see what you did there jayjerome66, putting “strong” in quotation marks so it can effectively mean anything you want it to. No, we’re not going to let you get away with it.

A truly good book debut is somewhere in the 135-140k range physical books, and some additional e-reader books. Mrs. Clinton’s numbers were anemic at best. The tour is a disaster on wheels, getting worse with every promotional stop and every interview. Look for sales to drop off significantly.

If you want an example of a STRONG release, take a peek at first week numbers for Rush Revere and the brave pilgrims. 158,000 physical copies and 20,000 digital.

“No wonder so few people take you seriously anymore.”

Ah, but that is both a stupid statement and counter-factual.

More and more people take this site seriously. That is empirically true.

You took it so seriously, you were compelled to come here and troll.

What a shame to be you. How embarrassing.

She’s the female version of Obame…. never accomplished much in life and can’t be truthful about her heritage.