Double Spy: Did US spy on German committee investigating US spying?

Double Spy: Did US spy on German committee investigating US spying?

On whom was Germany’s spy spying when US supposedly used that spy to spy? 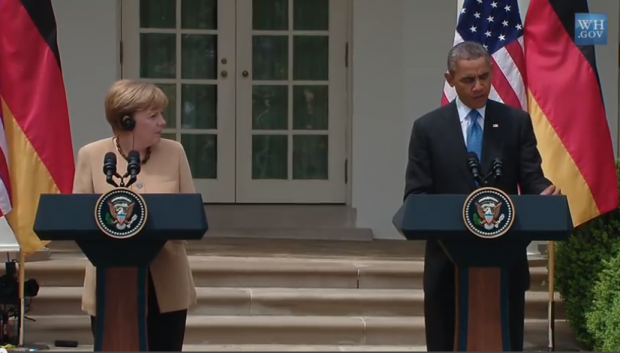 If the relationship between the Obama Administration and German Chancellor Angela Merkel weren’t frosty enough over the NSA spying on her phone — things got a lot more tense over the weekend.

With mystery enveloping a German intelligence service employee accused of spying — reportedly for the United States — German officials and commentators on Sunday angrily demanded a response from Washington, warning that an already troubled relationship was at risk of deteriorating to a new low.

The demands for a statement from the United States were nevertheless couched in cautious terms, suggesting that the scandal, which exploded on Friday when Germany’s federal prosecutor reported the arrest of the 31-year-old employee of the Federal Intelligence Service, might not be as bad as initially feared. The chairman of a parliamentary inquiry into American intelligence activities told German radio that it seemed there was no breach of security surrounding his committee’s work, as some news reports had suggested.

The revelations of a German spy acting as double agent for the United States is another piece of Edward Snowden’s information he stole from the National Security Agency when he was a contractor there. Release of classified information from Snowden last summer caused serious strains in the U.S.-German friendship.

Over decades of friendship since 1945, sharp language like that of recent months has been rare in German-American dealings. Those ties have been strained since last summer, when documents leaked by Edward J. Snowden, a former National Security Agency contractor, suggested that the N.S.A. had monitored the electronic data of millions of Germans.

The German government then appeared to receive assurances from Washington that nothing illegal had occurred. But the subsequent revelation that Ms. Merkel’s own cellphone had been monitored stirred new anger in a nation that remembers the role played by a snooping state under the Nazis and the Communists.

The news of the German double-agent come on the heels of a Washington Post expose using much of the data given to them by Snowden. Yesterday, the WaPo bombshell study of the documents revealed that most of the individuals caught up in the NSA data collection are innocent Americans — not foreign terrorist targets.

“Did US spy on German committee investigating US spying?”

Like asking you to pick one of the below :

A) In the woods
B) In the forest
C) On the ground
D) Pretty much any damned place they want ?

I should bloody well hope we are spying on Germany, and everywhere else. Who has ever imagined that we don’t? If a president were to decide not to spy on the rest of the world, he should be impeached. Spying is part of his job. Thank goodness 0bama hasn’t fired all the spies. I’m afraid that the inquiries into the NSA will end up repeating Frank Church’s unforgivable crime, hobbling our intelligence agencies and leaving us open to the next attack.

But are we spying as hard on China, Russia, Iran as we are spying on Germany?

I certainly hope so. But I also hope we never find out.

Who in their right mind wouldn’t spy on Germany?

And every other country whose actions and/or policies could affect our national interests or activities?

Just because Obama is a lying, incompetent, anti-American buffoon doesn’t mean he can shut down every single correct thing our spy agencies do.

I have absolutely no problem with this. I’m sure the Germans try to do this all the time.

However, I imagine that there will be a frosty atmosphere the next time Barack and Angela meet. Maybe Angie can just call him on the phone.

Now America has its Pollard. Maybe the Israelis can arrest a German spy, and arrange a 3-way swap.

Understand what x is saying

There is no evidence number 2&3 have been accomplished . X in this case Germany seems to be doing mostly what it wants.