You’re not paranoid, the government really is watching you

You’re not paranoid, the government really is watching you 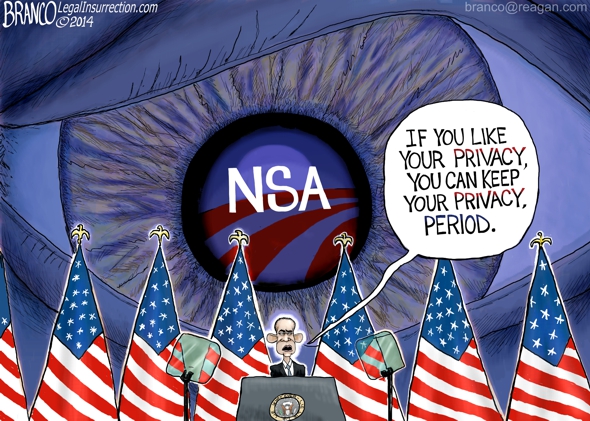 After an extraordinary four-month data-crunching investigation of material leaked by Edward Snowden, the Washington Post let off some fireworks this Fourth of July weekend. Their investigation proves that the National Security Agency (NSA) has monitored many more ordinary Americans’ internet usage than non-American foreigners under suspicion of terrorist activities.

Nine of 10 account holders found in a large cache of intercepted conversations, which former NSA contractor Edward Snowden provided in full to The Post, were not the intended surveillance targets but were caught in a net the agency had cast for somebody else.

Many of them were Americans. Nearly half of the surveillance files, a strikingly high proportion, contained names, e-mail addresses or other details that the NSA marked as belonging to U.S. citizens or residents. NSA analysts masked, or “minimized,” more than 65,000 such references to protect Americans’ privacy, but The Post found nearly 900 additional e-mail addresses, unmasked in the files, that could be strongly linked to U.S. citizens or U.S.residents.

The surveillance files highlight a policy dilemma that has been aired only abstractly in public. There are discoveries of considerable intelligence value in the intercepted messages — and collateral harm to privacy on a scale that the Obama administration has not been willing to address.

Many other files, described as useless by the analysts but nonetheless retained, have a startlingly intimate, even voyeuristic quality. They tell stories of love and heartbreak, illicit sexual liaisons, mental-health crises, political and religious conversions, financial anxieties and disappointed hopes. The daily lives of more than 10,000 account holders who were not targeted are catalogued and recorded nevertheless.

These revelations may be some of the most damning by Snowden as they directly contradict the NSA and Obama Administration’s claims. The NSA and Obama White House have repeatedly said the NSA metadata collection was only targeting known terror suspects and wasn’t capturing personal data or information of ordinary Americans.

The Post investigation also details exactly how an innocent American internet user can be drawn into the NSA’s web of surveillance.

Most of the people caught up in those programs are not the targets and would not lawfully qualify as such. “Incidental collection” of third-party communications is inevitable in many forms of surveillance, but in other contexts the U.S. government works harder to limit and discard irrelevant data. In criminal wiretaps, for example, the FBI is supposed to stop listening to a call if a suspect’s wife or child is using the phone.

There are many ways to be swept up incidentally in surveillance aimed at a valid foreign target. Some of those in the Snowden archive were monitored because they interacted directly with a target, but others had more-tenuous links.

If a target entered an online chat room, the NSA collected the words and identities of every person who posted there, regardless of subject, as well as every person who simply “lurked,” reading passively what other people wrote.

In other cases, the NSA designated as its target the Internet protocol, or IP, address of a computer server used by hundreds of people.

This is exactly the type and depth of personal and intimate information that NSA Director James Clapper specifically denied the agency collected in his infamous response to a question from U.S. Sen. Ron Wyden in testimony given in March of 2013.

Many lawmakers now believe that Clapper perjured himself in those remarks and the new Washington Post story seems to provide further evidence to those charges.

What might be lost in the major public relations nightmare the NSA and The White House will face with these new revelations are some critical success stories the Washington Post investigation reveals.

Among the most valuable contents — which The Post will not describe in detail, to avoid interfering with ongoing operations — are fresh revelations about a secret overseas nuclear project, double-dealing by an ostensible ally, a military calamity that befell an unfriendly power, and the identities of aggressive intruders into U.S. computer networks.

Months of tracking communications across more than 50 alias accounts, the files show, led directly to the 2011 capture in Abbottabad of Muhammad Tahir Shahzad, a Pakistan-based bomb builder, and Umar Patek, a suspect in a 2002 terrorist bombing on the Indonesian island of Bali. At the request of CIA officials, The Post is withholding other examples that officials said would compromise ongoing operations.

One of the serious flaws the Bush and Obama Adminstrations never reconciled in their attempts to fight global terror — has been the lack of success stories told to the American people.

Americans have always been tolerant to a balance of losing some personal liberty in return for concrete successes in combating our enemies. Unfortunately, the last two Presidents have been overly weak at touting the success while the breadth of infringement on personal liberties has been all too great and obvious.

Somewhere along the line, Snowden is going to be a mainstream hero. When that happens, any conservatives and/or right wingers who still think he’s a traitor will find themselves marginalized and labeled extremists.

Another “operation” being conducted under the guise of delivering the news.

Frank Church was also hailed as a hero, by the same unthinking people. The blood of everyone who died on 11-Sep-2001 is on that traitor’s head.

Bureaucratically sanctioned hacking. Maybe we should all be Sabu: Some go to prison. Some are hired by gov’t. Some make after-all is-said-and-done movies/books/Nobel Prize sales.

Giving State secrets to enemies of our nation is not whistle blowing,it is spying and treason. There is no difference between Pollard, Walker, and Snowden.

Pollard did not give secrets to an enemy. He is no different from the American spy just caught in Germany. He should have been put on a plane to Israel the next day, like any spy from a friendly country is, but the Israeli government betrayed him. A decent Israeli government would have kept the next US spy it caught, and exchanged him for Pollard, instead of just sending him home.

“If a target entered an online chat room, the NSA collected the words and identities of every person who posted there, regardless of subject, as well as every person who simply “lurked,” reading passively what other people wrote.”

“In other cases, the NSA designated as its target the Internet protocol, or IP, address of a computer server used by hundreds of people.”

“Months of tracking communications across more than 50 alias accounts, the files show, led directly to the 2011 capture in Abbottabad of Muhammad Tahir Shahzad, a Pakistan-based bomb builder, and Umar Patek, a suspect in a 2002 terrorist bombing on the Indonesian island of Bali.”

I’m supposed to get upset over this?

This is the tedious work of intelligence gathering, where there are a dozen haystacks for every needle full of ricin. So long as the information is used for legitimate intelligence work, there really is no problem.

Unless, of course, there is some sort of leakage of private information, such as the way Lois Lerner leaked IRS emails of private citizens to a Congressman (Elijah Cummings). That kind of behavior, however, is a crime and is punishable by law.

We cannot escape the need to collect information about communications by and between US citizens. We can, however, punish and deter misuse of such communications.

Exactly. Those ocmplaining about this are knowingly undermining US security and helping the enemy war effort. If the intelligence agencies are hobbled, the price will be paid in blood, and that blood will be on the heads of all those who whipped up or contributed to this hysteria.

…the way Lois Lerner leaked IRS emails of private citizens to a Congressman (Elijah Cummings). That kind of behavior, however, is a crime and is punishable by law…

LOL – do you really expect there to be any punishment of any kind … even a minor wrist slap? Cummings [black] and 0bama [black] are untouchable.

And to the NSA spies reading all this … did you guys have a nice holiday weekend? I went to Lowe’s today … but you guys already know that.

As I have mentioned before, if what the NSA was doing was lawful, they would not have had to fake evidence to incriminate whistleblowers and perjure themselves in front of the supreme court to deny people standing. Their actions only make sense as part of a BROAD CRIMINAL CONSPIRACY, with the intent to silence others so they don’t speak out. What the NSA has been doing is wholly unlawful and beyond the scope of Federal Power without Due Process in compliance with the 4th. These programs are not limited, they are UNLIMITED, they are not targeted it is UNTARGETED. It is illegal. It is unnecessary. It is dangerous to innocent Americans.