Conservative and Tea Party candidate Claudia Tenney has a chance to defeat the third most liberal Republican congressman, but she’ll have to do it on her own. 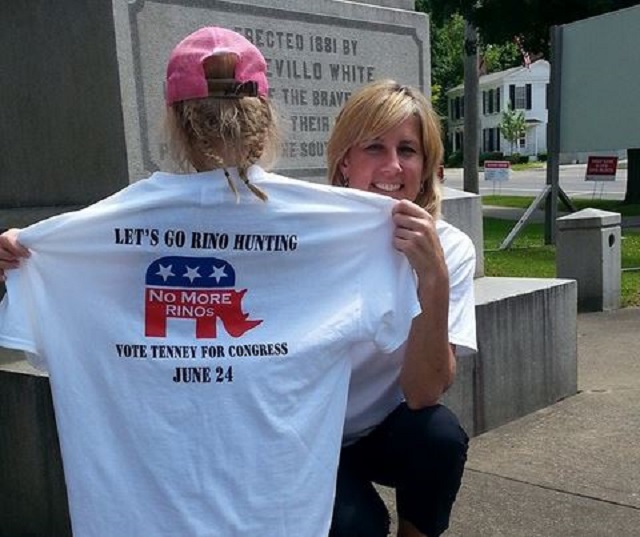 Claudia Tenney has been battling a million dollar avalanche of “false flag” Super PAC ads that deceptively portrayed Tenney as the more liberal candidate, and incumbent Richard Hanna as more conservative. In fact, the opposite is true.  Conservative voters in this conservative district may mistakenly vote for Hanna thinking they are electing the more conservative candidate.

The rallying cry has been picked up and amplified by Erick Erickson, Michelle Malkin, Laura Ingraham and Sean Hannity, among others.

Unfortunately, so far, no big name national conservative or Tea Party politicians have jumped into the race to help Tenney. With the primary this Tuesday, June 24, time is running out.

Why the lack of interest?  This is a completely safe Republican seat, the perfect opportunity to move the caucus at no risk.

And it could have been winnable (and still might be).

The only polls coming out of this race were either conducted by the American Unity PAC (supporting Hanna), or by GOP polling firm McLaughlin & Associates.  Both have Hanna ahead comfortably, but the PAC has their own agenda as we’ve demonstrated, and McLaughlin was slightly off on the Cantor/Brat primary in Virginia … by 44 points.

Turnout will be key.  If conservative voters come out in an effort to unseat the candidate they believe has abandoned his principles, and the moderate base stays at home thinking this will be a comfortable win for Hanna, the wide disparity in polls will dissipate rather quickly on primary day.

An analysis at the Syracuse Post-Standard highlights that expectations of an easy Hanna win could turn sour very quickly:

But can Tenney pull of an upset in a Utica-based district that has elected moderate Republicans and Democrats to Congress for the past 32 years? Given the district’s history, political analysts say Tenney’s best hope is for a low turnout in Tuesday’s primary. In such GOP primaries, the most conservative voters are often those with the strongest motivation to show up at the polls.

When Hanna, 63, faced a Republican primary from Tea Party candidate Michael Kicinski in 2012, the race stayed below the radar. Few people took the challenge seriously. Neither candidate spent significant money on the campaign. Yet Kicinski still managed to pick up almost 30 percent of the vote in a primary where only 9 percent (14,941) of the 165,097 registered Republicans bothered to vote in the election.What will happen this time if 91 percent of Republicans stay home?

Regardless of what happens on June 24th, the conservative and Tea Party movements had a chance to grab another big victory.

For some reason, conservative and Tea Party politicians chose to sit this one out.

Something they may regret should Tenney lose by single digits on Tuesday.

TUNE IN– @claudiatenney: "A vote for @RepRichardHanna is a vote for immig amnesty & open borders." Support Claudia: http://t.co/7f5STKLwo0

For someone who lives in the area Mr. Jacobson you are remarkably ignorant of the county not 10 miles north by the car drives from your house.

There is no Republican Party in Cortland County. The committee members at the start of their two year term elect 10 people to the Executive committee and from that point on committee members are nothing more than grunts with a checkbook. The Executive committee, most those who have some level of actual power in the county, make **ALL** the decisions on what the party will do. And they are just right of the Democrat party in Ithaca/Tompkins County. Just.

These clowns brag about the size of their bank account, never really spend money to back honestly **Republican** candidates, much less a Conservative. And God forbid you disrupt the status quo; you’ll be tossed out faster than a New York minute.

And don’t forget to mention the cozy little deal Democrats and Republicans in Cortland County has: Democrats don’t run in Cortlandville, and Republicans never challenge the majority in Cortland. It’s been that way for 17 years, and questioning the convenient nature of this “arrangement” will get you some very nasty stares.

If you want the legacy Richard Hanna (Much like the scumbag James Seward, Richard Hanna’s family has been in politics for generations) booted you’ll have to start booting the RINOs running the show in Cortland County.

The good news is a lot of the people in the Republican party here are “aging out” of their positions. The bad news is that they’re not aging out fast enough.

And they say that the USA has no royalty class. Sadly, your description could fit a myriad of localities across the country just by changing the location names and the players’ names.