VA funding has tripled since 2001, will Robertson admit her error? 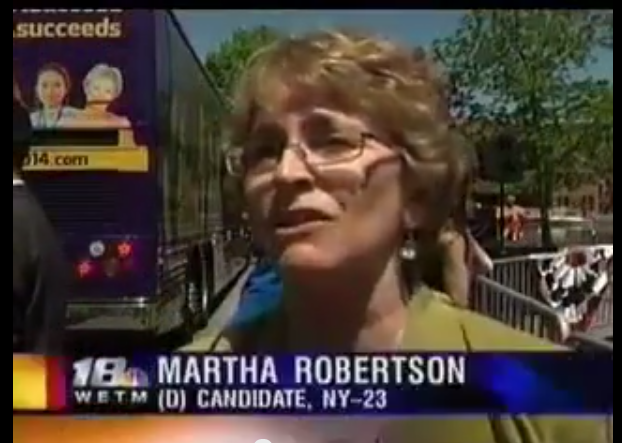 Martha Robertson, the Emily’s List-backed, DCCC “red to blue” challenger to Republican Tom Reed in NY-23, is a big supporter of single payer healthcare, although she’s dodged the issue during her campaign.

Robertson has stated openly prior to running that she see’s Obamacare as a stepping stone to single payer:

“We’ll get to single payer soon, but in the meantime, [Obamacare] is what we need to do.”

The Veterans Administration scandal poses a problem for Robertson, as it raises fears of what healthcare will be like if the government gains total control.

Robertson appeared recently with Nancy Pelosi, and was interviewed on local television. Robertson blamed the VA scandal on what she called decades of underfunding (emphasis added):

“And we see it’s not a matter of the care that they get once they get access to the care,” said Robertson. “There’s no question that they’re getting quality care and responsive care once they’re in the system. This is a problem of decades of underfunding the system altogether.”

Robertson could not be more wrong.

The VA’s problems are systemic, inherent to government bureaucracy running healthcare, not funding. According to a recent budget submission for fiscal year 2015, VA funding has increased dramatically year-over-year: 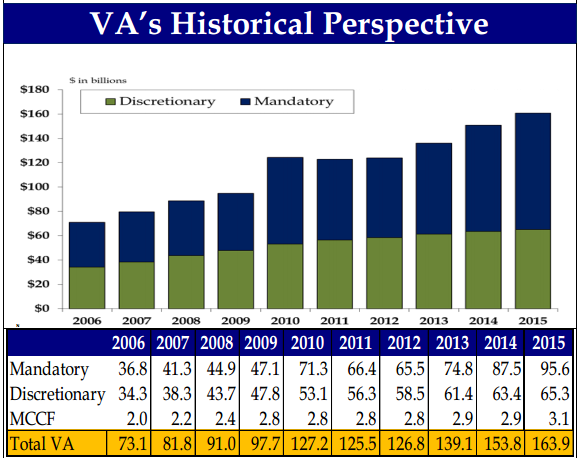 Funding has tripled since 2001, despite a decline in the number of veterans, as a former Secretary of the Department of Veterans Affairs recently wrote in The Wall Street Journal:

Much has been said about how to fix the VA’s problems. Some say the department is underfunded. I disagree. The VA’s budget has more than tripled, to $154 billion in 2014 from $49 billion in 2001, the year I became secretary. In that time, the veteran population has declined to 21.9 million from 25.5 million.

It’s even reported that the VA has more money than it can spend:

Despite liberal claims that VA needs more funding, based on a report from the labor union the American Federation of Government Employees (AFGE) that VA is underfunded, the scandal-plagued department actually has a surplus in medical-care funding.

VA expects to carry over $450 million in medical-care funding from fiscal year 2014 to fiscal year 2015. VA received its full requested medical care appropriation of $54.6 billion this fiscal year, which is more than $10 billion more than it received four years ago.

The VA, some say, needs more money to do its job and care for veterans properly. But looking at the facts, that math just does not add up.

Since 2009, Congress has given Secretary Eric Shinseki every penny he has said he needed to fund the VA fully, resulting in an astonishing 50% increase in the agency’s overall budget at a time when budgets everywhere else across the federal government have been squeezed, strained and slashed. Congress even exempted the VA from sequestration, a win that not even the Pentagon managed to score while still engaged in a war overseas.

Congress also agreed to take the extraordinary step of giving the VA the annual funding it needs to cover veterans’ health care a year in advance so that the agency’s hospitals and clinics never run out of money. It is the reason the VA’s health care system continued to operate without interruption during last fall’s government shutdown, even as parks, federal buildings and congressional offices were forced to close or curtail operations for weeks.

Fully funding the VA appears to be among the only promises Barack Obama actually kept, as a PolitiFact fact check asserted:

Politifact has ruled claims of underfunding such as that made by Robertson to be “FALSE”:

On Face the Nation, Vanden Heuvel said, regarding the VA health care allegations, that “Congress has cut funding, has slashed funding, for veterans’ benefits over these last years.”

That’s incorrect, as vanden Heuvel acknowledged to PunditFact. VA health care and “veterans’ benefits” aren’t the same thing, and the pot of money that paid for VA health care has gone up every year. No reasonable definition of “cut” — much less “slash” — fits the data, experts told us.

We’re rating the claim she made on national television, and we rate it False.

Will Robertson do the same?

Don’t count on it. Robertson still has not corrected her false claim that GOP operatives were caught trying to take down her website during a crucial fundraising period.

(Note, I did not reach out to the Robertson campaign for comment because they have not responded to my calls and emails for months.)

This is the liberals tag line for the low information voter.

They don’t CARE what the truth is. They bald faced lie because they know they can get away with it.

Is there any reason to elect another lying extornist to Congress?

The problem at the VA, is the same problem at schools: moral negligence. There is no quantity of money which will compensate for lack of integrity or ensure accountability. In fact, the demand for progressive compensation is evidence of personal corruption, which may have a systemic origin or expression.

That said, this is not the first call to treat symptoms while ignoring causes. Most notably, Obamacare was a blatant effort to submerge causes in order to avoid addressing progressive inflation induced through government monopolies or monopolistic behaviors.

As for moral negligence, not only is the value of human life negotiable, but so is the archaic concept of morality, where the order of corruption is not immediately obvious.

It should be crystal clear that to fix the problem, you need to raise taxes to address the underfunding … right Martha?

Not being able to spend all the money Congress is showering on the VA reminds me of Hillary and embassy security. I’ve had people try ridiculous arguments on me that Republicans slashed funding. My memory goes back far enough to recall all the money State left on the table for that purpose (and I’m using “embassy” loosely, consulates and whatever are covered too) and Congress slightly trimmed the amount of surplus unspent money available. Yet it ‘slashed’ spending in rhetorical arguments and got those four in Benghazi slaughtered. All Congress’ fault, see.

Being a leftist means never having to say you’re sorry.

It’s almost a matter of religious doctrine with them. Think of “MoveOn.org” and the “Lean Forward” slogan, and the Clinton/Obama tactic of stalling, stonewalling, and delaying investigations, followed by claiming the unanswered questions are “old news.”

Given the Democrat’s potential electorate is comprised mainly of their True Believers (for whom lies are like phone banks, just another tool in the drawer) and the low-info voters who don’t even realize they are being lied to, there is minimal risk.

Once again Robertson plays fast and loose with truth. Her Republican “operatives” hacking claim was unsupported by any evidence, now she mistakes something easily refuted. Robertson reshapes reality to match her imagined view of the world. She is a proponent of a national health service. If the VA experience is any guide, and it is, it would be a disaster to have the federal government run health care. Too bad Robertson seems unable to learn from failure.

Have you considered sending both of her claims to Politifact to be rated?
They do encourage readers to send suggestions. I’ve done so a few times.

They would make attempts to contact her, and if she’s non-responsive, they’ll likely go ahead and rate without her input.