Funny at White House Correspondents’ Dinner, but not in real life for people affected 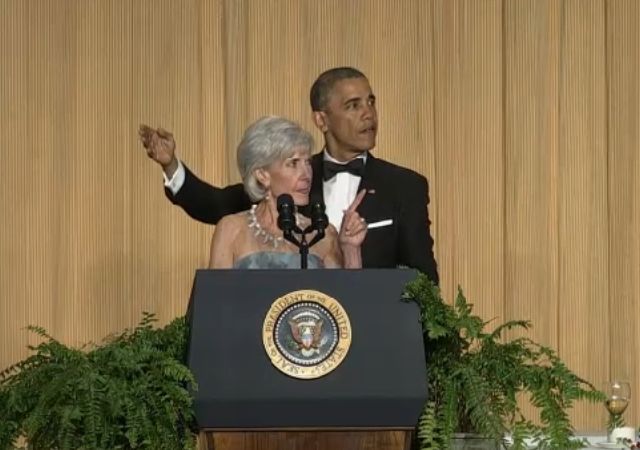 Saturday evening’s White House Correspondents’ Association dinner was complete with jokes from speakers about both Democrats and Republicans, as well as some jabs at the media.  (Not surprisingly, some of those aimed at Republicans were typically more tasteless than others).

But the event had its share of attempts at self-deprecating humor as well.

“After my stellar 2013, what could I possibly talk about?” President Obama quipped at the start of his own remarks.

The president made a few references to the abysmal rollout of healthcare.gov.

The healthcare.gov rollout debacle was again highlighted in the last moments of the president’s remarks when recently resigned HHS Secretary Kathleen Sebelius made an appearance.

Obama acted as though he was having some technical difficulties with a video and asked, “Does anybody know how to fix this?”

Out stepped Sebelius, who took to the podium to “assist” and said, “I got this, I see it all the time,” as the crowd laughed.

While I have no say in the matter, I’m for eliminating this event.

Are you really surprised by her lack of judgement?

Hopefully, the next one of these events will be held at Leavenworth.

who told that 60+ yr-old woman to wear a strapless dress? I have come to the conclusion that people in NYC and WDC have no TASTE.

Sometimes I’m confused at republican opposition to health care. Republicans never wanted to reform healthcare but yet it’s so wrong to try. Oh but the alternative is buying across state lines. Hahah Rich people when never know hunger. Small town non minorities will never know racism. A liberal will never think government is too big. A conservative will never be poor or even think ther is such a thing as income inequality. A business owner would want to lower the minimum wage that should create more jobs in theory right????

And don’t forget the broadbrush that covers your projection onto others.

I’m opposed to Obama on virtually everything, so this isn’t a defense from some leftist.

But didn’t W. do a video for the dinner in which he spoofed his inability to find WMD? Didn’t lefties criticize him for making jokes about the issue? Didn’t others defend the video for showing an admirable ability to be self-deprecating?

Of course, W. has some genuine humility and decency.

Having a laugh at the taxpayer’s expense. Swell.
Was Barney Frank invited to speak, too.