A repeat of what happened at U. Michigan? 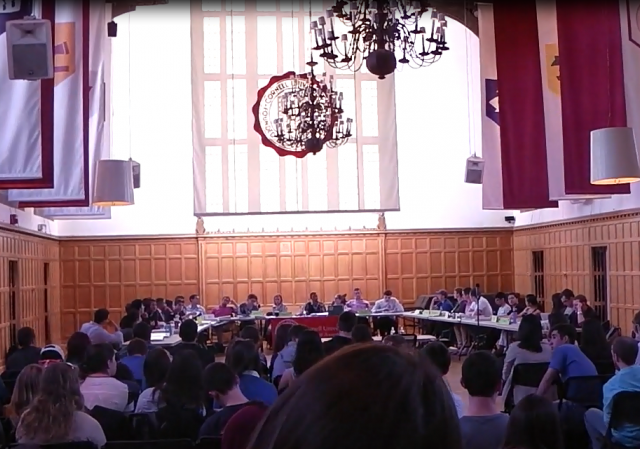 Last Thursday the Cornell Student Assembly voted 15-8-1 to table indefinitely the anti-Israel Divestment Resolution brought by Students for Justice in Palestine and some other groups.

The video of the shouting by students — and one very aggressive non-student — reflected the frustration of the pro-divestment students.

One anti-Israel Cornell professor even claimed they were denied democratic process, a claim echoed by pro-divestment students in the student newspaper and elsewhere.

To the contrary, the democratic process worked. They just lost the vote.

The type of procedural voting that takes place in almost every legislature in the country to prevent legislative time being taken up with items that have insufficient support.

When a divestment resolution was tabled at U. Michigan, the pro-divestment students took over the student government offices and staged a sit-in until the student council agreed to a full debate and vote. That debate ended with the same result by almost precisely the same margin, but only after the campus was ripped apart with threats and harassment.

Will Cornell go the same way of U. Michigan with the losing side taking direct action after losing a vote?

Looks that way. A Cornell student forwarded to be the flyer below which is being circulated. While the flyer raises a number of issues, clearly the impetus was the Israel divestment vote. It looks like an attempt to hook other unrelated causes into the anti-Israel divestment cause through a solidarity movement — a pretty classic tactic: 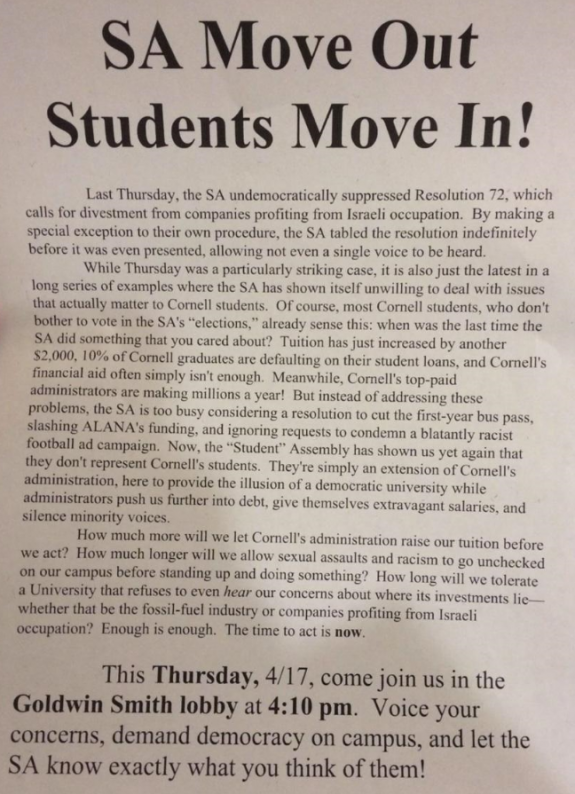 Get Ready to Rumble!!

Professor J vs. “Get your camera out of my face!” Chick.

Will he get his camera in her face again? Or will he zoom in wildly on her boobs (a la Meghan McCain)?

LukeHandCool (who would remind everyone that boob shots take their toll … and who went to school with famous ring announcer, Jimmy Lennon, Jr.)

Sometimes you have to wonder what these people could and would accomplish if they were not driven by their hatred of Israel and their burning desire to commit genocide against the Jews.

easy solution, disband these student governments.
I think they are illegal anyways.

Oh, by all means, rumble. Let the baby agitators win as many friends and influence as many people as they can, by threats and harassment. It will be an enlightening experience for their friends who used to think they have a point.

I hope somebody comes prepared with choice bits of the Hamas Covenant, including the bit about the contract to engage in an advertising campaign to convince Muslims that they have an individual religious duty to kill every Jew on the face of the earth, and reconquer every square inch of land ever held by a “Muslim” regime.

This BDS movement is part of the Hamas advertising campaign, and should be exposed as such.