When they say “direct action” what they mean is intimidation 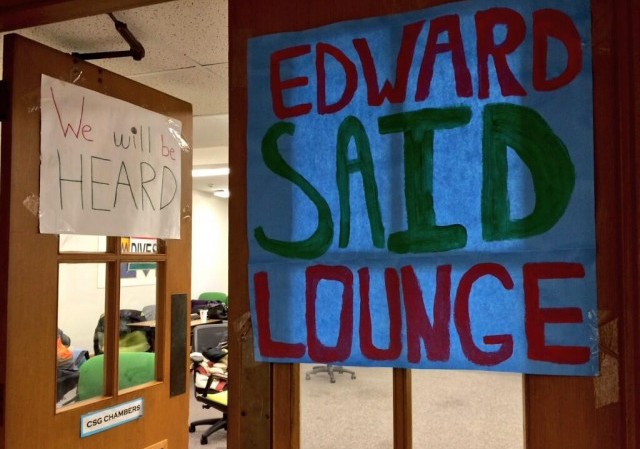 This has been a mixed, but mostly bad, year for the BDS student movement on campuses in the United States.

While a BDS motion did pass at Loyola Chicago because it was brought up with little or no notice, major BDS pushes were rejected at UCLA (down vote), U. Michigan (vote to table) and Arizona State (vote to table). For the most part, when pro-Israel students have time to organize, they win.

At Northeastern University, the administration suspended Students for Justice in Palestine after a long series of incidents culminating in service of mock eviction notices in dormatories, in violation of school policy. Expected mass protests did not materialize — instead Northeastern SJP and its allies could muster only 150-200 marchers, many if not most of whom were not even students.

The tension is boiling among student BDS supporters who claim that they are being denied a chance to speak. That, of course, is nonsense. They hold their defamatory “Israeli Apartheid” weeks (in which interest is waning) and otherwise can advocate their cause.

What they can’t do is things like invading personal dorm rooms to leaflet.  You may have a right to speak, but not in my living room on my couch.

Nonetheless, these pro-BDS students now are taking “direct action.” Anti-Israel students at U. Michigan have taken over the student government offices, renaming it the Edward Said Lounge.

A leader of Northeastern SJP, Max Geller (see more about him here) writes in The Nation to expect more “direct action”:

On February 24, following our distribution of “mock eviction” fliers in student dorms, university police officers arrived unannounced at the homes of Northeastern Students for Justice in Palestine members, and called our cellphones, to interrogate us about the leaflets. On March 7, the university suspended SJP without giving us a hearing. Palestine Solidarity Legal Support, whose attorneys are helping advise us, has documented more than 100 instances of suppression of pro-Palestine speech across the US in 2013. Following a year of administrative roadblocks and red tape, direct action—like leafleting about the Israeli practice of home-demolition—is all we have left at our disposal. Direct actions have increasingly become the recourse for students who wish to engage in political speech in support of Palestine. As universities curtail pro-Palestinian speech or thwart BDS initiatives, direct action from SJP chapters is set to increase.

Will the direct action turn into direct threats?

At U. Michigan, it apparently already has, via Free Beacon:

Pro-Palestinian activists on the University of Michigan campus have had the cops called on them for threatening pro-Israel students and staging a sit-in over the student government’s refusal to back an anti-Israel initiative to divest from the Jewish state.

University of Michigan police were contacted Wednesday evening after two pro-Palestinian activists allegedly threatened a student who refused to support their boycott initiative.

The threatening rhetoric used by these pro-Palestinian activists is part of wider campaign by the University of Michigan’s pro-Palestine group Students Allied for Freedom and Equality (SAFE), which is part of the virulently anti-Israel Boycott, Sanctions and Divestment movement (BDS).

Is it any wonder they chant “Long Live The Intifada“?

What i want to know is who is funding this effort to denegrate isreal? What is the money path? Some dailight would expose these hateful bigots

It’s probably coming from our own pockets as tax money via one of obastard’s support groups qualifying for some sort of BS grant. 🙂

It’s quite likely that the next step of “direct action” will include bombings and such. If these people have to kill to force concessions, they will. No big surprise there when “by any means necessary” is part of the program.

It takes no money to convince a bunch of college kids willing to believe that the U.S. and American institutions are bad. They are practically no-cost advocates for the cause, I’d imagine. And willfully ignorant of facts. Just look at their effort to push for only one side of any debate or discussion on the matter for proof.

Can’t we just carve a swastika in their foreheads, a la Inglourious Basterds? BTW, where is The Bear when we need him?

“Direct action” is the term used by three Jewish Voice for Peace activists who came to speak at UC Irvine a couple of years back. That is what they did when Netanyahu spoke in New Orleans earlier and they disrupted him.

They also used the term, “Useless Discourse” to refer to pro-Israel talk and said that pro-Israeli students should NOT be able to feel comfortable on campus.

One of the speakers was Israel anarchist Matan Cohen, a student at Hampshire University. I challenged him how he as an Israeli, could come to our country and tell us who had a right to speak and who didn’t.

We are headed for a tragedy on one of our campuses over this issue. When it happens, some university administrators who have refused to confront this issue will have blood on their hands.

When their ideas have no power to persuade, all they have left are their fists.

I want to tell you something: This lounge is in the back of the student govt office, and the only way you would know about it is if you read the news or actually are in student govt. It is hilarious.