Anti-Israel students got to vent, but not much else happened. 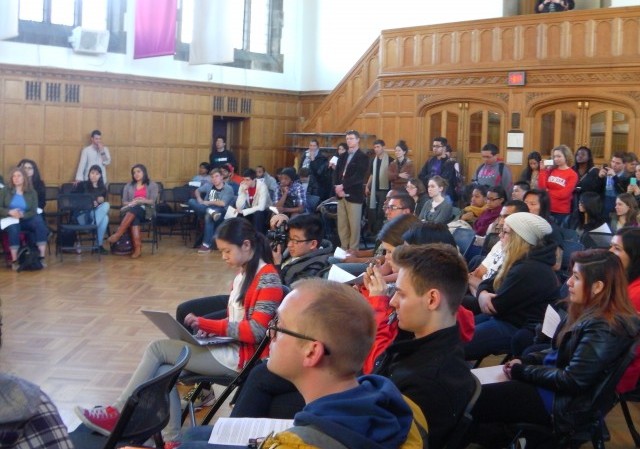 As mentioned last night, and as expected, there was a protest by student groups seeking divestment from companies doing business in Israel in reaction to last week’s 15-8-1 decision of the Cornell Student Assembly to table indefinitely the proposed divestment resolution.

About 75 protestors attended the Student Assembly meeting. I heard one of them refer to hundreds, but it was not that many, and many drifted out after a while.

Here’s a video of the pro-divestment students walking from their gathering area to Willard Straight Hall, where the Assembly meets. You can see there just weren’t that many, certainly not hundreds. A disappointing turnout considering the priority the anti-Israel groups place on the protest.

The Assembly then voted to suspend the rules and its session, in what appeared to be a preplanned maneuver, according to multiple people who were in the room at the start. I arrived later, because I had class.

Effectively, the Assembly went out of session, and then let the anti-Israel students spend almost two hours giving speeches, in what the protesters termed an alternative assembly. There also were other unrelated topics, such as free bus passes, that consumed some of the protest discussion. 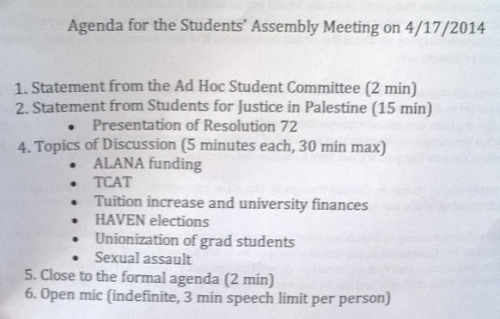 The only interesting part was that David Skorton, President of Cornell, previously was scheduled to appear before the Assembly, and kept that appointment. So the President was present during part of this alternative assembly, but not because of the protest.

There were some minor theatrics as protestors vented a little, but nothing major. Skorton gave a short speech about improving the process, and left:

All in all, it was not very eventful.

I’ll post a picture or two and maybe a short video a little later. (added, above)

As it stands now, the anti-Israel divestment Resolution remains tabled indefinitely. But I would not expect this to be the end.

The fuel in their car is Jew-hatred. This is definitely not the end. Their desired end is genocide of the Jews. BDS is but the first step.

This reminds me of the bad old days at Cornell in 1969 with the building takeovers. Ironically, the takeover of Barton Hall was the birth of the Student Assembly.

The New Left made mincemeat of the classical liberals in charge of the University. Their motto was “by any means necessary”. They lied and bullied.

The poor turnouts and behavior exhibited by the divestment crowd underlines their fringe status.

It’s relatively easy for fringe movements to get control of a group, especially when they favor aggressive confrontation with critics. Few are willing to stand against a mob.

But when a few show the courage, others are emboldened to stand with them. And the mob’s intended stampede is stopped, showing them to be the small but vocal minority they are.

Fringe they may be, yet if they gain the support of those in power their ability to destroy will be almost unstoppable.