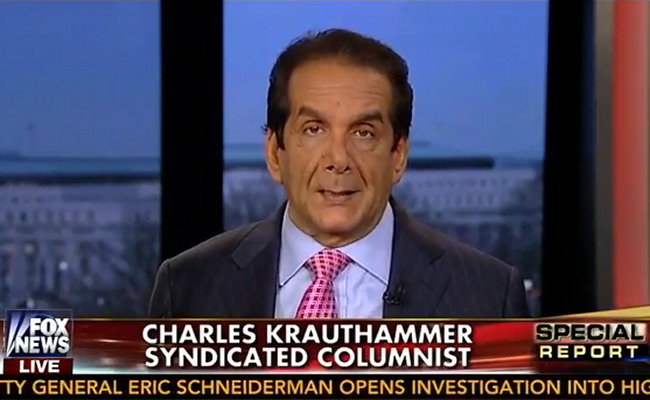 The sudden resignation of HHS Secretary Kathleen Sebelius came as a surprise to many considering that just last week she stated her intention to stay.

On March 31, Sebelius joined HuffPost Live’s Alyona Minkovski to discuss the Affordable Care Act sign-up deadline. When asked if she would still be part of the Obamacare effort in November, Sebelius said she “absolutely” would.

When prompted a second time to confirm her intention to remain with the administration, Sebelius declared, “I’m in.”

Now that Sebelius is out, many people have tried to explain the reason for her departure. Last night on Special Report, Charles Krauthammer cut to the chase.

Transcript and video via National Review…

“I think this was a textbook case of how to do it efficiently,” he said on Friday’s Special Report. Dumping Sebelius at the height of the website’s woes would have been a big political hit in the public’s perception of the law; now, she can leave on a high note after reaching the goal of 7 million enrollees, or “whatever the phony number is today,” Krauthammer explained.

The resignation is also far away enough from the midterms elections that it will likely not be an issue in November. Even if Republicans manage to slam the White House and Democrats over the health-care law during nominee Sylvia Mathews Burwell’s confirmation hearings — which Krauthammer was doubtful would happen given Republicans’ recent track record in congressional hearing — it’ll only be a “week or two” of negative press.

“I think this is sort of how you do it if you’re going to defenestrate a member of your Cabinet,” he said, “from a ground-floor window, so I don’t think she was actually injured in the fall.”

Her replacement is a lieutenant in Hillary’s crime family. She was involved in the destruction of evidence in the Vince Foster “suicide”.

Sebelius violated the “Hatch Act”, remember? The regime could not save her from that, they had to let her go. (note: I can’t believe they actually followed one law).

I did not come as a surprise to me.

This is part of her “mission.”

Straight from the Bundy Ranch story comes this unhappy story that I’m sure the Administration had wished was left forgotten.

Federal funds are running out at the Desert Tortoise Conservation Center and officials plan to close the site and euthanize hundreds of the tortoises they’ve been caring for since the animals were added to the endangered species list in 1990. “It’s the lesser of two evils, but it’s still evil,” said U.S. Fish and Wildlife Service desert tortoise recovery coordinator Roy Averill-Murray during a visit to the soon-to-be-shuttered reserve at the southern edge of the Las Vegas Valley last week.

… an endangered species euthanize because of the Sequestration, and who at OMB was in charge of the Administration’s response to the Sequestration ? She already has experience with “death panels.”