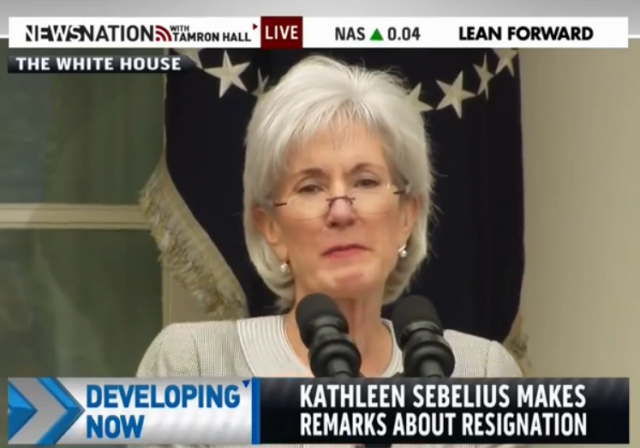 The video speaks for itself.

“A page is missing”

$5 says somebody from the WH staff stole it just to make her look bad and to hint that her incompetence is what screwed up Obamacare.

Not to defend Sebelius, upon whose head I would not urinate if her hair were on fire, but a team made up of Aristotle, Da Vinci, Einstein, and Borlaug probably couldn’t have made that Rube Goldberg piece of crap legislation work, especially with constant political meddling from the White House.

I actually feel sorry for the poor woman. She was given an impossible job, ordered to lie to the public and do other stupid things, and now after doing the best anyone could have under the circumstances, she’s being forced to fall on Obama’s sword. I wish her well, but hope she is condemned to suffer the mess she created.

I don’t feel sorry.
I hope one day she ends up where she belongs: in jail together with Lois Lerner, Eric Holder and their boss.

She is just doing her job, playing her part in their screw-the-american-people scheme. Now she steps aside with a cushy reward and takes heat and blame so that King O can continue coming up with new ways to screw us all.

Let’s take a moment to recall that it was congress and the president – not Sabelius – that forced this Obamanation on us. Going in, maybe she actually thought she might be able to make it all work. That would make her a fool but not a war criminal. The job pays $199,700 per year so maybe Sabelius just needed the money.

I respect your compassion, but I disagree.
She is as guilty as all the morons that voted for it “so that we can find out what is in it.”

Also don’t forget that her criminal incompetence was instrumental in the toilet flushing of 600 million taxpayer dollars.

The “just doing my job” defense lost traction in 1945 in a place called Nuremberg.

Somehow I have an odd feeling that she will become an author.

what happens when you lie down with dogs?

no sympathy from me….any government hack with hubris enough to think this horrible law is worth even TRYING to implement is a mortal enemy of liberty and should be used as food for the tree IMHO.

maybe it was left in the 20,000 plus pages that she has written to screw the american people.

It is obvious that Obama is surrounded by idiots to make him look good. Think of Biden, Pelosi, Reid, etc. And someone (another top man) left part of her speech in the printer while they were all freaking out. LOL.

If you are so incredibly stupid that you can’t ad-lib your way through your resignation speech, then you are probably STILL over-qualified to work for the 0bama Administration.

I always thought she was a page short of a prepared speech.

Should have bed using the TelePrompTer.

Sebelius is now free to join TASS or if she prefers a more left-wing network, NBC “News”.

Sibelius forgot the rule that her speech could only be 77% as long as Obama’s.

That is elegant Freddie! Bravo!

As much as I hate Cruella Deville, I can’t stand that she is the scapegoat for the Obamas on this one…particularly Michelle and her Canadian socialist buddies that set up the shite site.

Burwell is the Director of the White House Office of Budget and Management. It was she who sent out the order to shut down the National Parks, the memorials, even the National Zoo’s Panda cam. It was on her order that elderly veterans were shut out from their memorials and others actually thrown out of their homes or businesses that happened to operate in National Parks.

…and get this, Burwell was also involved in the mysterious death of Vince Foster! http://freebeacon.com/blog/obamas-new-hhs-secretary-proved-her-loyalty-by-clinton-by-digging-through-a-dead-mans-trash/

Now there’s a woman who will do anything for her bosses.

If ObamaCare were a classic English short story, this would make a good denouement.

But I wouldn’t put it past Obama’s people to do something to make her look bad, like when he didn’t mention her at his celebration/announcement of “7 million sign-ups or something.”

Never believe any of the failures of ObamaCare are due to Sebelius. The law is fatally flawed all on its own. And the website debacle was entirely the fault of the White House, which refused to allow work to go forward in 2012 lest details leak that would hurt Obama’s chances for reelection.

They were planning on two full years of development before the rollout, Obama’s political needs ended up giving them less than one. No wonder it fell on its face.

The Obamacare debacle is a perfect illustration of F.A. Hayek’s Fatal Conceit:

Socialists are wrong because they disregard the fact that modern civilization naturally evolved and was not planned. Additionally, since modern civilization and all of its customs and traditions naturally led to the current order and are needed for its continuance, any fundamental change to the system that tries to control it is doomed to fail since it would be impossible or unsustainable in modern civilization.

Was she blinking out T O R T U R E in morse code during that ?

Professor, am I wrong to think that you meant your headline to read “… to find out what was not in it.”?

What is terrifying is that when she said, “There is a page missing,” no one laughed.