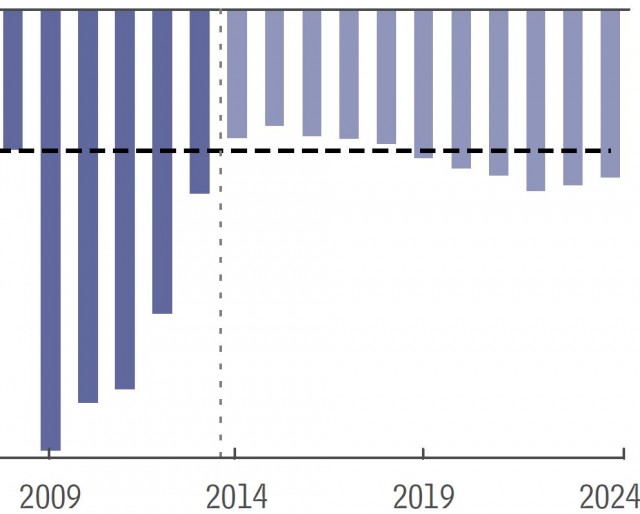 A false signal indicating that a declining trend in a stock or index has reversed and is heading upwards when, in fact, the security will continue to decline.

A bull trap often causes some investors to buy the stock, but because the stock continues to decline after the initial signal, those who bought in are “trapped” in a bad investment.

That seems to be what we have now with claims of improvement in the annual deficit, being touted far and wide, including at Think Progress.

Per the latest CBO report via The Hill, CBO forecasts a drop, then a sharp rise in federal deficit (emphasis added):

The Congressional Budget Office on Monday lowered its deficit projections but still forecasts a sea of red ink for the nation’s fiscal future.

The nonpartisan CBO said the deficit will drop in 2014 to $492 billion from the $514 billion in had forecast in February.

It said the deficit will fall from 2.8 percent of gross domestic product in 2014 to 2.6 percent of GDP in 2015. [Read updated budget projections.]

The projected 2015 deficit would be the lowest since 2007 when it was 1.1 percent of GDP. It rose after that to 9.8 percent by 2009, as the President Obama sought to stimulate the economy through spending in the wake of a deep recession.

But the CBO said projected deficits will quickly expand again, with the deficit reaching 4 percent of GDP by 2022.

And by 2024, the federal debt is estimated to reach 78 percent of the economy, twice the 39 percent average of the past four decades.

The budget office warned that the aging of the population, rising healthcare costs and increasing interest payments on the debt will bring about the return to $1 trillion deficits by 2024 in the absence of legislative changes.

Here’s the chart from CBO’s report: 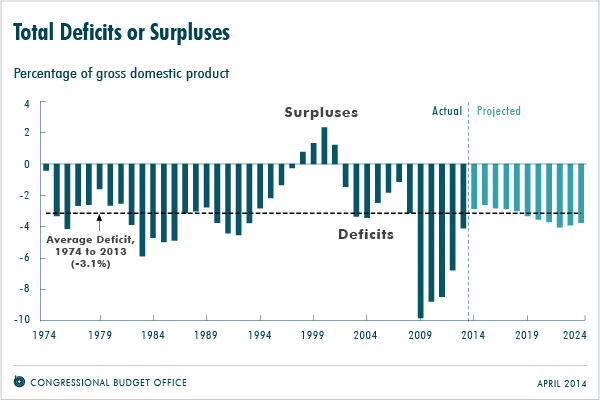 This might be a good time to bring out this brilliant prediction from Mathew Yglesias, one of the founders of Vox.com, back when he worked for Think Progress in June 2009: 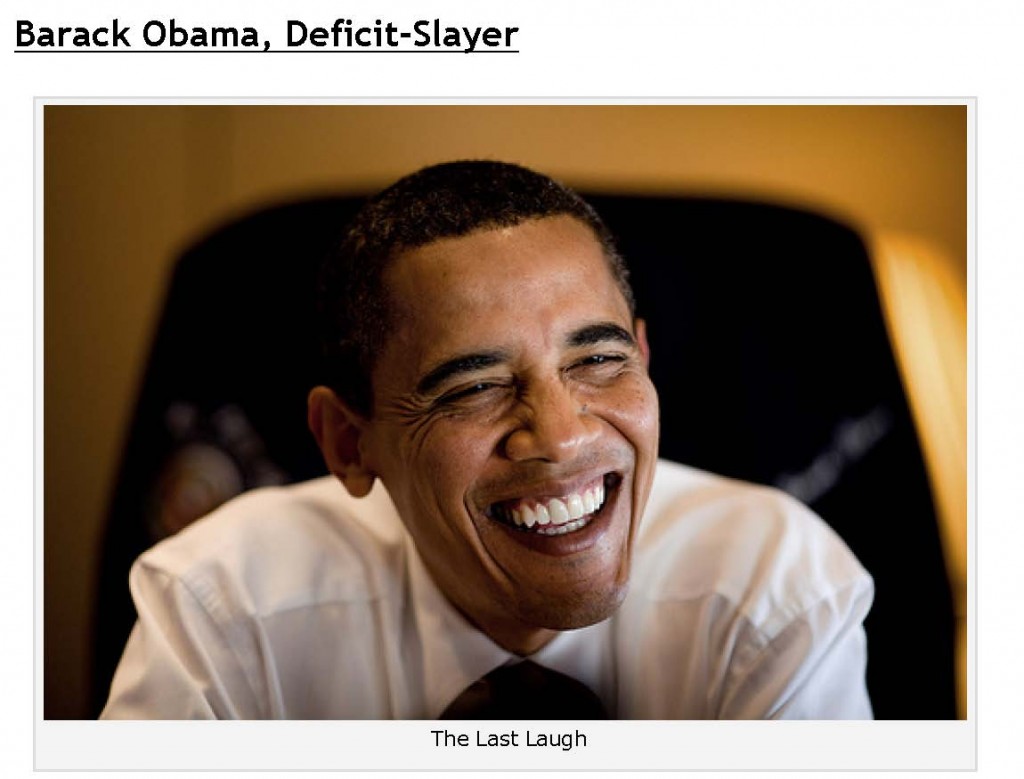 Obama slays the Deficit the only way he knows how – by encouraging the election of a conservative Congress and a GOP president.

Progressive devaluation of capital and labor; borrowing from tomorrow’s tomorrow; spreading the debt far and wide; reducing costs through cheap foreign and domestic labor; abortion/murder by the millions; and they still cannot get it right. Perhaps bubble economics is inherently flawed. I wonder what more people will be willing to sacrifice for money, sex, ego, and convenience; and promises of rainbows and unicorns.

CBO must still be using a lot of hopium in their figures as well … since that is what they are fed by team Obama. But even with QE and (what must be) a lot of capital gains taxes paid in advance on stock and bond gains (as Clinton got in his Nasdaq 5000 daze) … there is still no real “stimulus” of the economy.

Clinton benefited from Enron style BS (cap gain taxes from the bubble for one thing), while Bush stopped Enron, but took blame. It may end that way again, as the fallout might not happen till we get a new president. It would have seemed Bush left Obama with too much baggage ($450B deficit spending, which Obama called irresponsible and un-American) but lo and behold, quantitative easing to the rescue … we no longer needed anyone to buy our bonds, the fed reserve just “bought” them.

We are on new ground … never in history has a federal reserve bought $4 Trillion of our own debt. But the economy is so depressed in actual production, it hides the real inflation (real inflation is inflated money supply, which shows up in some prices e.g. food energy stocks, but not all).

Anyway … CBO projections are based in funny money and false hopes of continued 3-4% growth, which only works in ever inflating currency, as I understand it. Too many phony entitlements are promised, with not enough “little engine that could” capitalists to pull the whole train. Especially since government ambushers like Lerner, EPA, Holder are doing everything possible to derail small business capitalists and freedom fighters.

This stuff is all seriously bogus, and not just the Dem spin material. Even the CBO graphs are grossly misleading. Take the “Total Deficits or Surpluses / Percentage of gross domestic product” graph, with the cheerful “surplus” around 1999. That was a budget surplus. It means nothing. A budget is what you admit to planning to spend, vs. what you hope will come in. In other words, lies vs. pious hopes. And that’s after the really embarrassing chronic money losers have already been left “off-budget”.

That chart is budget surplus, not anything real. Even the “nonpartisan” CBO doesn’t want to make that too obvious. And that might be the big news here. In the past, the CBO has been pretty reliable about labeling a mere budget surplus accurately, and not hoping that you’ll mistake it for something more significant. Now, maybe they’re giving up on accuracy.

A real surplus is when government revenue exceeds government spending in any fiscal year. To find surpluses, look at the statements of national debt by year. This can be a pretty useful number – it’s not subject to perversion by playing games with corrections for inflation, as the spending and revenue for any year are, obviously, for the same year. When the debt grows from one fiscal year to the next, there were no real surpluses – spending outstripped revenue, and the country went that much further into the debt hole. Of course, as usual with government figures, there’s wriggle room galore, mainly having to do with “internal” and “external” debt, internal debt meaning money sloshed around between different portions of the federal government, and external debt meaning bonds held by investors.

The last time the US had a federal surplus – a real one, not a fake “budget” one – was in 1957. Both 1956 and 1957 were surplus years, with the national debt decreasing in both years. Just one more reason why so many of us still say “I Like Ike”. A Republican, of course.

Democrats still pump out propaganda claiming the fiscal ’09 budget was Bush’s last budget and that therefore Obama’s been reducing the deficit.

Remember: The fiscal ’09 budget *should* have been passed in Nov ’08. It was not. Pelosi & Reid, expecting Obama to win, delayed the bills until March of ’09, after Obama was sworn in. They jammed in every last bit of pork they could think of, fully aware of the fact that they could forever lie about the bill as a “Bush budget”. It was passed in both House and Senate by Democrats and signed by Obama.

That spike in the chart above, showing the massive deficit increase in ’09, is ENTIRELY owned by Democrats.

It was, at the time (ie. pre-Obamacare), easily the most irresponsible bill ever passed into law. All the networks covered the signing ceremony and Obama’s speech about it. They’d imprinted the words “A New Era of Responsibility” on the leather binder of the bill.

Even the biggest deficits under Bush occurred in the last two years, after Democrats took over Congress.