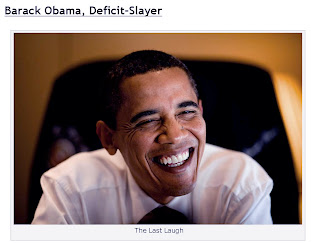 As the economy recovers, tax revenues will rise, social safety net outlays will fall, and stimulus measures will begin to tamp down. If we can assume further growth in 2011, the complete expiry of Recovery Act provisions, and the winding down of the Iraq War, that’ll be further deficit reduction. On the merits, people would still do well to be concerned about the deficit further out when, in the absence of structural reform of the health care sector, Medicare costs will bury us all. But in the short term, things are going to look worse than they really are in 2009 and then look better than they really are in 2010. And of course people vote in the even-numbered years.

Now back to reality:

The likelihood of severe unemployment extending into the 2010 midterm elections and beyond poses a significant political hurdle to President Obama and congressional Democrats, who are already under fire for what critics label profligate spending. Continuing high unemployment rates would undercut the fundamental argument behind much of that spending: the promise that it will create new jobs and improve the prospects of working Americans, which Obama has called the ultimate measure of a healthy economy.

Reality doesn’t care about the 2010 elections:

Those of you (who can still afford the luxury of) a trusty Bloomberg will note the ‘exhaustion rate’ for jobless benefits – EXHTRATE – reveals that people are not leaving the pool of continuing unemployment claims because they are getting new jobs; Rather, they are leaving because they have exhausted their benefits.

They are now unemployed AND broke. That is hardly a green shoot …

Even liberal think-tanks are not buying the administration’s rosy projections:

The budget outlook at every horizon is troubling: the fiscal-year 2009 budget is enormous; the ten-year projection is clearly unsustainable; and the long-term outlook is dire and increasingly urgent. These general trends are punctuated by a number of specific highlights that illustrate the United States fiscal problem. The Medicare Trust Fund is now projected to be exhausted by 2017. Credit default swap markets now imply a non-negligible probability of default on senior U.S. Treasury debt in the next five years. A top Chinese official has publicly questioned the security of U.S. Treasury obligations.

Maybe laugh out loud is wrong. Try cry out loud. Or for crying out loud.

I know this is off topic, but I think this story will be of interest to you and your readers: http://tr.im/ATLteaPARTY

Sheesh, hope, in defiance of the laws of economics, spring eternal.

"President Obama and congressional Democrats, who are already under fire for what critics label profligate spending."

Already under fire! Geesh. Only a pesky "critic" would label doubling our national debt in the next ten years as "profligate spending" when it is obviously just a warm-up exercise.

He's obviously delsuional and grasping onto that last bit of hopenchange that he needs to validate his reason for believing in Obama. Let him have his fantasy.

We are retired, had a decent retirement income, was looking forward to get a good sale from our big home – but no more. It is very depressing! Adult son and grandchildren living with us – his job future is bleak – Las Vegas tourist is in the pot. Thanks to Obama! There are a lot of delusional individuals in D. C. with this administration! Scary! Crying helps but doesn't solve the problem. Will there be an end to this and a Knight to bring it all Right!

The disconnect btwn state-run media and reality is alarming. I really hope this is just a Democrat/Republican thing, and it's just a matter of voting people out and voting other people in. That would be great. It doesn't feel like that. It feels structural. For example, we didn't have "state-run media" before, did we? That's part of what annoys Bill Clinton about Obama so much…

the sheer dishonesty of the left has been pretty appalling for pretty long.

The Washington post article you link to also has this to say.

"Many economists agree that the job market would be in much worse shape had the stimulus package not been enacted. And some say more stimulus measures may be needed, even as the federal government grapples with a huge budget deficit."

So the link you provide to show everyone what the "reality" is actually seems to support Obama's spending. It at least admits some merit.

Also, this quote "Those of you (who can still afford the luxury of) a trusty Bloomberg will note the ‘exhaustion rate’ for jobless benefits – EXHTRATE – reveals that people are not leaving the pool of continuing unemployment claims because they are getting new jobs; Rather, they are leaving because they have exhausted their benefits.

They are now unemployed AND broke. That is hardly a green shoot …"

Well, that quote refers to data that ended in dec 31 2008. It shows how the exhaustion rate began exponentially rising during the Bush administration. Hardly a fair source to use when critiqueing the Obama administration.

Reign 2020: The WaPo article citing unnamed economists gives no back up for those anonymous sources and their opinions, probably because there is no support for the proposition that the unemployment rate would be meaningfully worse without the stimlus package. Only a tiny percentage has been spent, and the few jobs created are mostly temporary. It is a make work program, not a make jobs program. A

nd there are "many economists" (and me) who feel Obama has made things worse by his plans for enormous defecits and higher taxes which have caused businesses to cut back in anticipation of trouble ahead. And Obama has done nothing to support business expansion, only government expansion.

As to the exhaustion rate, the comments by the author to the article make pretty clear that the data is through April 2009. One of the commenters criticised the author for not using May data, and here was the response: "That is how the Exhaustion rate is reported — on a month delay so next month (July) we get the May data." The visual of the chart also looks like it goes through April. So these are Obama's numbers.

You can't go on blaming Bush forever. It's Obama's economy now and for the coming years. And at your age, you will be paying for Obama's mistakes and deficits for the rest of your working life, long after I am retired. I don't mean that as a put down to you, just in the hope you realize that Obama is selling your future for current political gain.